A Hodge Podge of Mills Miscellany 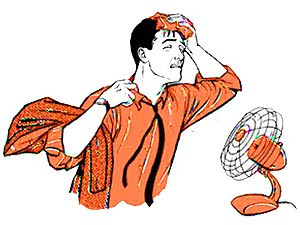 The temperature here in steamy Florida—and across the U.S. for that matter—simply has been sweltering! I should be out finishing the task of painting the house, but it has been easier just to stay indoors, enjoy the air conditioning, and work at cleaning out the George Mills-related folders that have been squirreled in and all around this computer, I have some miscellaneous items that I want to post before we wrap things up here at Who Is George Mills?

Here they are, in no particular order:


First up, Part I of the April 1944 edition of the Quarterly Army List provides a snippet of information that may help us understand one aspect of the life of George Mills a bit better. 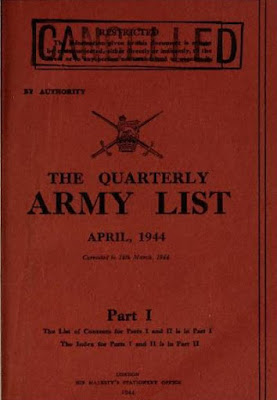 In October 1940, Mills rejoined the army and was named an officer in the Royal Army Pay Corps. I have been unable to locate information regarding where he was assigned after that. We do know that M ills had family that at one time owned much of Devon—the Aclands—but there's no reason to suspect that the army would have given much care to that in assigning him.

However, we do know that Vera Mills, George's wife, passed away at Minehead, Somerset, on 6 January 1942. Why she may have been residing at Minehead in January is unknown, but the Quarterly Army List does contain this, in a list of APC Regimental Pay Offices:


It may simply be a coincidence, but the second in command at the Exeter pay office in 1944 had drawn his assignment there on 7 January 1942—the day after Vera's death.

Mills may not have been there at all, and Major Coate may have taken over as second in command at Exeter in an unrelated transaction. Still, it is a clue as to where George may have been between late 1940 and early 1942.


We know that it is extremely likely that Vera Mills (née Beauclerk) had been abroad (in Canada or the United States) with her mother and sister during most of the First World War before returning to England and later marrying George Mills.

Found are a couple of indices recording the entrance of 19 year old Vera Louise Beauclerk into Honolulu, Hawaii, on both 26 March 1913 (arriving aboard the Marama) and again on 16 June 1913 (aboard the Chiyo Maru). 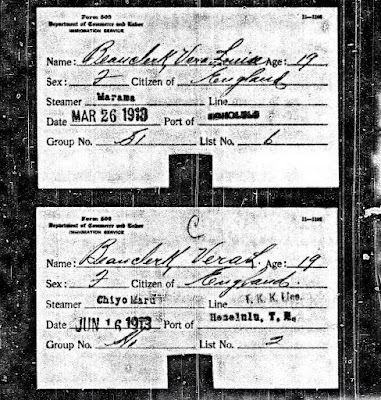 You can see the records above. [Click to enlarge any image in a new window.]


George Mills was born in Bude, Cornwall, in 1896. At the same time, across England, A. Max Wilkinson, Head Master of Warren Hill School in Meads, Eastbourne, had had a telephone installed at the school. You can see pages from that seemingly ancient 1896 directory. 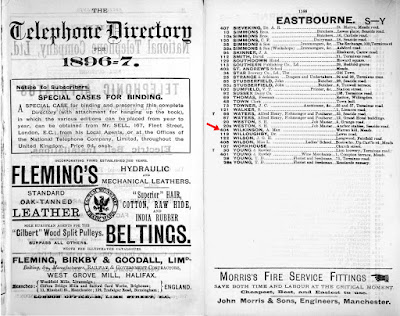 George would be grown and working at Warren Hill by 1930.


We also recently located the master's residence across Beachy Head Road from the school, circa 1901. Thanks to the yeoman work (yeoperson?) of the resourceful Jennifer M., we also know who lived there during the 1911: Charles Ridley Witherall and Robert Mervyn Powys Druce, both "schoolmasters" at a "private" school. Also on the census form are Scottish sisters Mary and Janet Robb, the housekeeper and cook respectively. 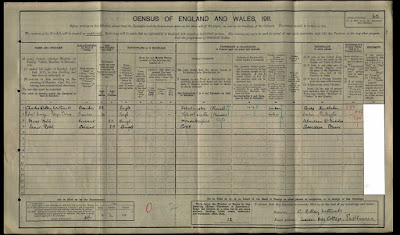 This is the residence in which George Mills would have lived while he was teaching at Warren Hill, and is likely the one described in his first novel, Meredith and Co.

And, before we leave a subject that concerns A. Max Wilkinson, his Times obituary card has been located: It reads: "WILKINSON.—On Oct. 27, 1948, at Exmouth, very peacefully, A. MAX WILKINSON, sometime of Warren Hill, Eastbourne, and Wittersham, Kent, aged 92 years. Cremation, private." 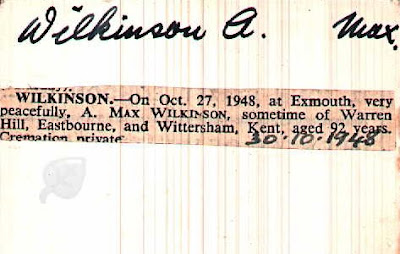 
There are dual listings for the second marriage of George's half-brother, Arthur Frederick Hobart Mills, born 1887: His second wife in one place a Monica Wilson, and in another she is a Monica Wilks. The correct one is clearly Monica Wilks, and here is her birth record from 1902 at Ecclesall Bierlow: 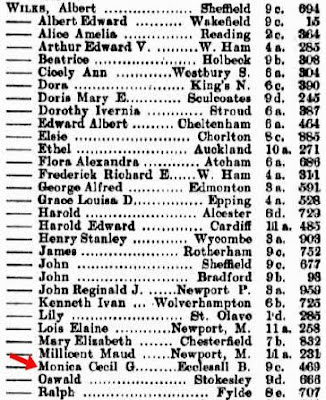 There is also a record of her death—the only one I can find—in the London Gazette dated 17th August 1981 on page 10642. After her name, Monica Cecil Grant Mills, in a column labeled "Address, description, and date of death of Deceased," it reads: "Rivlyn Lodge, Shorefield Road, Downton, Lymington, Hampshire, Widow. 5th August 1981." 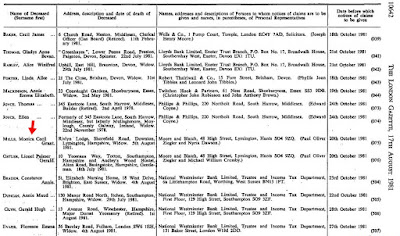 Winds Cottage, Downton, is where Monica lived with Arthur Mills until his death in 1955. I am still unsure whether or not Monica—15 years younger than Arthur—bore him children. If so, they are not among the records at ancestry.com. 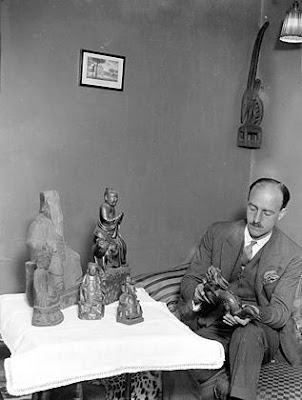 
We have had only one image of Arthur Mills here, and the on-line caption I found with the photograph makes reference to Arthur having returned with relics from a trip to China "circa 1925," pictired, left.

We now know that trip occurred during 1928. While I cannot find a record of him arriving in England, there is a record of him steaming into Los Angeles, California, aboard the S.S. President Cleveland on 23 February 1928, having departed Hongkong [sic], China, on 30 January. He is listed a 40 year old "writer," who had obtained his visa on 26 January in Hongkong.

There are oddities: Mills lists his birthplace as "Woltexton, England," although his birth took place in Stratton, Cornwall, and he was raised in Bude.

Incredibly, is it possible that this was simply a mistake, and that the typist simply placed an "x" where Mills had wanted an "r"? Wolterton is the ancestral family home of his wife, Lady Dorothy Mills, who was estranged from her family because of her marriage to Mills. Was this simply a perverse joke on the part of Arthur, or did he think listing his birthplace as the estate of peerage—the Walpoles—would gain him some shipboard advantage? 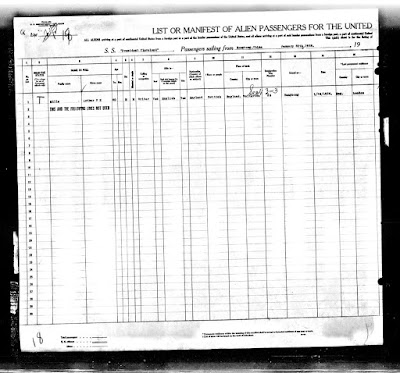 In addition, Mills is the only person on the manifest's page [above]. Apparently no one else was making the trip from China to L.A.

Having always wondered if Arthur had missed george's 1925 wedding because he was in China, the answer now comes back a resounding 'no'...


Although Arthur and George's uncle, Dudley Acland Mills (Lt.-Col., Royal Engineers), is commonly associated with his eccentric activities in China, we find him here, on page 2326 of the 3 April 1906 edition of the London Gazette, being named by the King to be a member of the Legislative Council of the Island of Jamaica [below]. 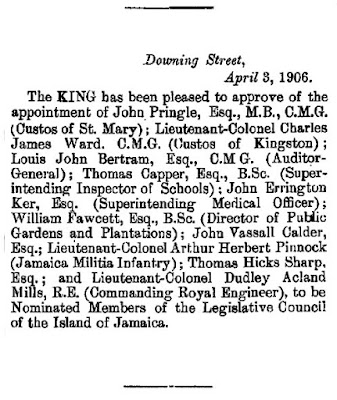 I did not record in which text I found the following thumbnail sketches [below] of the lives of Barton Mills, father of George Mills, and Barton's uncle, Henry Mills, also a cleric in the Church of England. (We met Henry once before.) 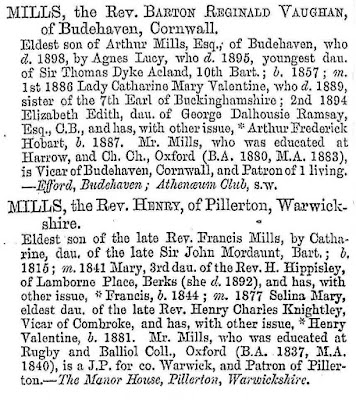 
In our seemingly never ending study of Gillmore Goodland and family, there was an additional weirdness that has just come to light. The 1901 census lists Gillmore, a 34 year old "civil engineer," as living on London Road at Royston, Hertfordshire—a place we recently examined in relation to the maternal family of Egerton Clarke—with his daughter, Kathleen G. Goodland, aged 5 months, a 28 year old Scottish nurse/domestic named Mary Woodhams, and his 23 year old wife, "Martha L. Goodland." 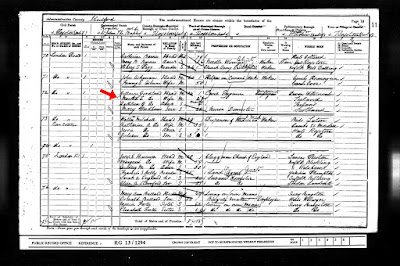 Goodland's wife was also named "Kathleen." It’s odd that the census taker managed to get her middle initial—standing for "Lillis"—correct, but somehow managed to get "Martha" in as her first name. Peculiar.

There is a birth record for him now, seen below, having been born in Godstone, Surrey, in the summer of 1910. That's the location recorded for his older sisters on the 1911 census.

We had thought young Desmond (he would sign his name in 1941 as "Desmond Gillmore Goodland" below, right) was in Wales, during that census, possibly with his aunt, Grace Goodland.

We now know that's incorrect. The infant in Wales recorded as "Gilmore Goodland" actually had that first name spelled correctly: Gilmore, with one "L". This child was actually Frank Gilmore Goodland, son of Gillmore's brother Ernest Talbot Goodland, who was then living in Australia, and Ernest's wife, Winifred Margaret Goodland (née Owen), who was visiting "her sister Florence Owen together with my great grandmother Selina Owen in Cardiff." 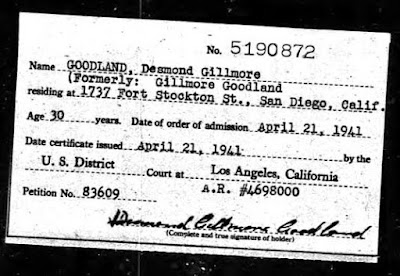 Many thanks to Winifred's descendant, John Owen, for providing the above information in his own words, as well as for helping me work out the lad's identity.

However, that begs the question: "Where was infant Desmond Gillmore Goodland—less than a year old, with his mother and father in North America for a year and his sisters in Godstone—during the taking of the 1911 census?"

It still seems odd that Gillmore and Kathleen would have sailed to America when he was a newborn—and they clearly did—presumably leaving him in England, but sequestered in a place where the infant would not make the census count.

Peculiar. But, then, there were many peculiarities in the story of Gillmore Goodland, Engineer.


Daldry was a croquet player who competed at the time the Mills siblings were on the circuit along the south coast of England. Those with an interest (and the access, which I do not enjoy) may want to peruse a taped interview with Sir Leonard. It is entered in the text: A Guide to Manuscripts and Documents in the British Isles Related to Africa: British Isles (Excluding London) by James Douglas Pearson and Noel Matthews (London: Mansell, 1994).

My hunch is that the interview would be fascinating. 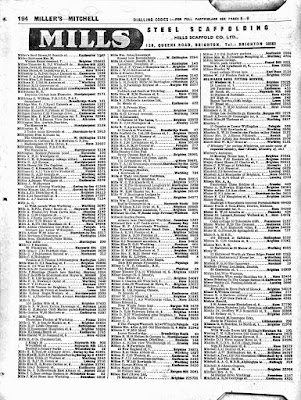 I Wish I Could Dial It and See Who Answers:

Lastly, there is something about a single, innocuous entry, tucked away in the 1951 Brighton telephone directory that holds my interest. There is no way of knowing if it is our George Mills, but it reads:

Is it the George Mills of our interest? For all we know, it could be a Gareth or a Guy Mills.

I'm not certain why entirely, but of all of the G. Millses I've come across in all of the telephone directories, on all of the World Wide Web, this one makes me think it could be George...


And, as always, if you have any information, speculation, or recollections of George Mills, his family, his friends, his life, or his times, please don't hesitate to contact me, and thank you very much in advance!