Sometimes, as I'm working on this project, I find something new. Other times, I find something surprising! That happened to me yesterday when I stumbled upon this: A 1968 telephone directory listing for "Mrs. A. Hobart Mills."

That came as a surprise for a few reasons. Arthur Frederick Hobart Mills, half-brother of George Mills, apparently used the name Arthur Hobart Mills, and even occasionally simply Arthur Hobart, as an author of novels and magazine articles. For example, this is from ebay.com:

A quick dash shows that a search for "Arthur Hobart Mills" using the admittedly crappy engine at ancestry.com either turns up our own Arthur F. H. Mills or unrelated junk. He's the only "Hobart" among the Arthur Millses. 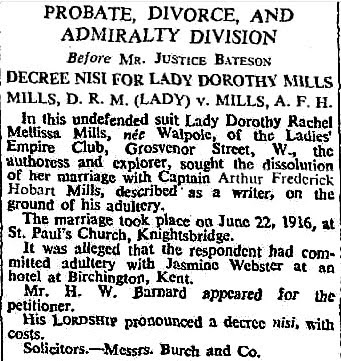 Much of what we know about Arthur's life has already been published here, taking us through his divorce from Lady Dorothy Mills [née Walpole] due to infidelity with a Miss Jasmine Webster. The divorce petition was filed in 1932 and notice of the divorce decree ran in the London Times on 24 March 1933.

Lady Dorothy had suffered a nervous breakdown in 1932, and I'm certain most folks assumed it had much to do with her recovery from a horrific traffic accident in 1929 and her all-too-ambitious travel to Venezuela and the Middle East soon after. One wonders if the breakdown was, at least in part, a result of discovering Arthur's adultery.

Arthur and Lady Dorothy had lived separate but equal lives throughout at least the last decade of their marriage. They traveled independently of one another, celebrated Christmases away from one another, and essentially seemed to have lived parallel lives. It wouldn't be the world's biggest shock to realize that they'd drifted far apart.

In 1922, the listing changes Arthur's name to "Mills, Capt. Arthur H." That stays the same until the September 1929 directory, when only the telephone number changes: "SLOane 6986."

The 1930 London book, however, adds something interesting. There's an additional entry at that number: "Mills Lady Dorothy, 91A Ebury st S.W.1 . SLOane .. 6986." The same number, just an entry for herself.

It stayed that way through the November 1932 directory, but in the subsequent May 1933 London book, the listing for Capt. Arthur H. Mills at 91A Ebury Street is gone. The listing for his ex-wife was changed to "Mills Lady Dorothy, 17 Burnsall st S.W.3 FLAxman. 2476." That listing, after their divorce, remains in place until 1939.

[Note: I can't find a telephone directory for 1940, likely due to the war, but in the 1941 London directory, Lady Dorothy's Burnsall Street listing is gone. After that, although I know that she moved to Sussex and ended her days in Brighton, I can no longer verify any telephone listing as being hers through her passing in 1959.] 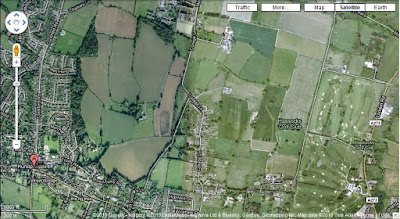 It's a crapshoot knowing exactly where and when ex-husband Arthur went for the next two decades. There's a relatively immediate 1933 directory listing for him in Hurstpierpoint, Hassocks, just 5 miles south of Cuckfield: "Mills Arthur, Stables cottage ……… Hurstpierpoint 188." A 1942 listing remains the same, save for the actual telephone number having been changed to "2188." The listing would make complete sense because, as an avid golfer, Mills would have been close to the Hassocks Golf Club [seen in the map, left]. In 1943, however, that listing was gone.

Finding a future wife for Arthur had me checking other for records of that apparent second marriage, and I found one of the most peculiar entries I've ever seen in British record-keeping!

Sometime in late 1933 [October-December], an Arthur F. H. Mills married a woman named either "Wilson" or "Wilks" in Cuckfield. That's actually what is recorded [below, right]: "Wilson or Wilks."

I looked up Wilks and found that "Monica C. G. Wilks" married a man named "Mills" in Cuckfield during that time frame.

However, I also found a record showing that "Monica C. G. Wilson" married a man named "Mills" during that same period in Cuckfield.

I thought to myself, "Let's check more records!" We know that Arthur Mills died while living at Winds Cottage, Downton, near Lymington, Hampshire. Today, that's actually listed on Google Maps as being in "New Forest." The result of a quick records search turned up a death in New Forest between July and September in 1981: "MONICA CECIL G MILLS" who had been born on 07 JE 1902 [where JE apparently stands for "June"'.

Arthur Mills did, in fact, take a second wife! And, with a marriage in 1933, Monica would have been 29 years old to Arthur's 46 at the time of their nuptials—something that must have chafed Lady Dorothy as she pined over her own lost youth, looks, and health.

Finding Monica Wilks or Wilson's own birth record wasn't quite satisfying. It states that Monica Cecil G. Wilks was born in Ecclesall Bierlow [apparently once part of Sherwood Forest] somewhere between July and August 1902. The name simply would be too coincidental to be an accident, so I must assume they've recorded her birth date incorrectly on either her birth or death record—but who knows which? 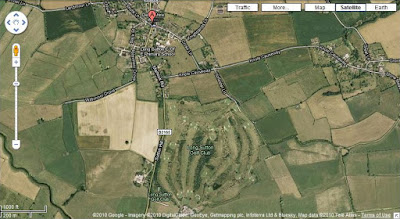 Finding records for Monica is quite problematic. I can only find one other, and that's a listing from a 1946 telephone directory for Hampshire, Devon, Somerset, Gloucester, Glamorgan, and Wales. The listing reads: "Mills Mrs. Monica C. G, Lower Mundey's ct ………….. Long Sutton 79." There is no listing for an Arthur Mills in the same directory.

This jumps Arthur and Monica a good ways to the west since that Hurstpierpoint listing in 1942, almost to Taunton, and adds a telephone listing in his wife's name, rather than his own. Is Arthur Mills with her? The Long Sutton Golf Club [left] is nearly as big as the rest of Long Sutton itself. Avid golfer Mills is there, for sure.

It's curious why Arthur would have no phone listing from 1942 through 1945, and then suddenly crop up under his wife's name in Long Sutton. Perhaps coincidentally, between the 1940 publication of his novel White Negro and 1947's Don't Touch the Body, I can't find any evidence of Arthur having published a single word—anywhwere.

Arthur had, indeed, returned to the military on the second of September 1939. Perhaps he'd been recalled, perhaps he'd volunteered. It was odd because Mills left the service as a captain and a war hero, but returned as a second lieutenant. Mo matter, he relinquished his commission just 8 days later on 10 September.

Did something happen to Mills during those 8 days? Did it affect his health and/or his ability to write? It's quite possible that White Negro had almost all been written in 1939 with anticipation of it being published in 1940, and it may really only have needed editing of the manuscript or proofs. 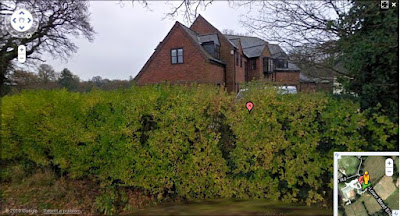 What prompted the move to Long Sutton, one that was apparently short-lived? By 1948, there'a listing for a "Mrs. Arthur Mills" on "Holmwood Farm, Hordle" with a phone number of New Milton 443. This listing seems to reappear just after the publication of Don't Touch the Body. It remains as-is through 1949.

In 1950, the listing changes to "Mills Mrs. Arthur, Mead End ho …………. Sway 239," apparently near Sway, east of the New Forest National Park. Mead End House is pictured, right. What's peculiar about this location is the lack of an 18-hole golf course for miles in any direction—but what a fine, large abode! 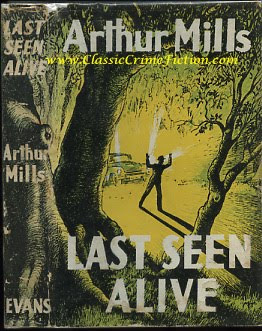 In 1951, the blurb from the dust jacket of his crime novel Last Seen Alive read: "Arthur Mills is the son of the Rev. Barton Mills and Lady Catherine Mills. He was educated at Wellington and Sandhurst and was gazetted into the Duke of Cornwall's Light Infantry in 1908. He has served in China, France, and Palestine. Mr. Mills is at present living in Hampshire where his main recreations are golf and gardening. In addition to books of short stories he has published over twenty novels."

By 1954, the listing changes to "Mills Mrs. Arthur, Winds cottage Hordle la Downton …….. Milford-on-sea 88." That was likely the last telephone listing he'd see. Arthur passed away on 18 February 1955 in an area that today has at least 10 golf courses within a 10 km radius of Winds Cottage, including two on the Isle of Wight, where Mills had convalesced at Freshwater from the wound he suffered at Aisne during the First World War.

That listing stayed in place until 1958, then disppears until it resumes in 1967 reading: "Mills Mrs. A. Hobart, Winds cott Downton la Downton … Milford-o-s 2744." Apparently that part of Hordle Lane had beenrenamed Downton Lane. That listing stayed there until 1972, but disappeared from the 1973 directory.

Then, in the April 1976 directory [right], the listing returned again, same address, same phone number. It remained there in 1977, but in 1978 it disappeared for good. Was it once again simply taken out of the book? Had Monica moved to a nursing home at the age of 76, or in with one of her children? The latter suggestion assumes Arthur and Monica had children—issue we thought had not occurred on this branch of the family tree.

The London Gazette in 1955 published this information:

Address, description and date of death of Deceased

Names, addresses, and descriptions of Persons to whom notices of claims are to be given and names, in parentheses, of Personal Representatives

Date on or before which notices of claim to be given

No mention of a wife or heirs: All business. There was no obituary in the London Times, although he was mentioned in Lady Dorothy's scant, well-hidden obit in the 8 December 1959 Times that read: "Obituary LADY DOROTHY RACHEL MELISSA MILLS, elder daughter of the fifth and last Earl of Orford, died on Friday at Brighton. She married in 1916 Captain Arthur Hobart Mills, from whom she obtained a divorce in 1933 and who died in 1955."

I supposed that served as Arthur Hobart's belated Times obituary as well.

Did Arthur and Monica Mills actually have children? Right now, I'm uncertain, one way or the other. Children could be significant: They might hold family mementos, photos, souvenirs, memorabilia, and other ephemera that I have been assuming ended up at best being sold in lots at an estate sale in Budleigh Salterton in 1975 when the Misses Mills, Agnes and Violet, passed away there. At worst, I feared it may have all ended up in a dumpster.

This is a lot of new information, but at as always, if it triggers any thoughts, ideas, or informed speculation, please don't hesitate to let me know!