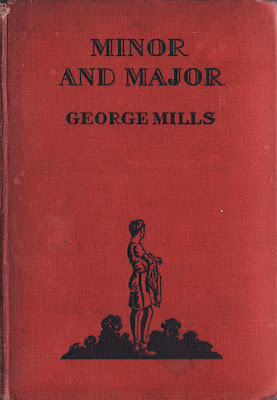 Back from my holiday visiting family in Michigan, what did I find waiting for me but the first edition of Minor and Major by George Mills that I'd ordered a month ago! Here are the details of my shipment from Chesterfield, U.K.:

Book Description: THIS BOOK IS IN GOOD+ CONDITION IT DOES HAVE SOME WEAR AND TEAR BUT A MUCH LOVED BOOK. 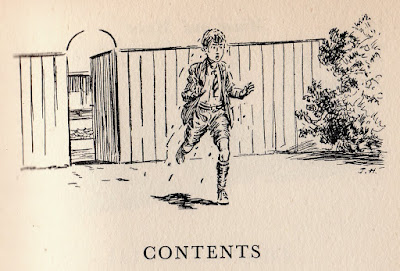 Well "GOOD+" is somewhat of an exaggeration in this case: The book has a broken binding. For my purposes, however, it's a delight!

This 1939 first edition published by G. G. Harrap & Co. matches perfectly the format of their 1938 first edition of King Willow. The cover art, color, and typeface are meant to mirror King Willow's appearance and the line illustrations of H. M. Brock. The illustrator here, though, is John Harris. Harris is a stylized draftsman whose layouts, compositions, and craftsmanship are laudable, but whose figures lack the breath of life that previous illustrators C. E. and H. M. Brock imbued in the characters created by Mills.

As I'd suspected, there is more to be found in this edition than in the circa 1959 reprinting by Spring Books that was published in Czechoslovakia. The first edition contains a preface written by George Mills in 1939 that is not found in the subsequent impression. It reads, with my emphasis on names: 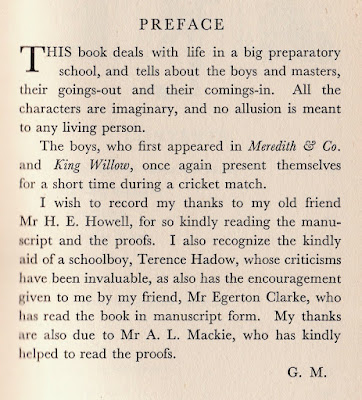 THIS book deals with life in a big preparatory school, and tells about the boys and masters, their goings-out and their comings-in. All the characters are imaginary, and no allusion is meant to any living person.

The boys, who first appeared in Meredith & Co. and King Willow, once again present themselves for a short time during a cricket match.

I wish to record my thanks to my old friend, Mr H. E. Howell, for so kindly reading the manuscript and proofs. I also recognize the kindly aid of a schoolboy, Terence Hadow, whose criticisms have been invaluable, as also has the encouragement given to me by my friend, Mr Egerton Clarke, who has read the book in manuscript form. My thanks are also due to Mr A. L. Mackie, who has kindly helped to read the proofs.

It may not seem like much, but short of the discovery of an unexpected trove of letters authored by George Mills, this snippet of writing is a welcome new insight into the man as a person.

An interesting acquaintance of Mills is schoolboy Terence Hadow, who was born in Kensington, London, in 1921. Hadow would have been approximately 12 years old at the publication of Meredith & Co. in 1933, about 17 upon the publication of King Willow, and around 18 when this undated preface was composed in 1939. Presumably, Hadow was a friend of the family, living in Kensington near the Mills. He may even have been taught by Mills at the mysterious "Eaton Gate Preparatory School" in London between 1933 and 1938.

We know that Mills, who would soon become an Army paymaster after the publication of Minor and Major, must have been rocked during the war by the death of his wife Vera in 1942. Tragedy seems to have touched Mills again, and quite soon, a year later.

Hadow was obviously close to Mills, although how close is open to speculation. Still, his death following relatively closely on the heels of Vera's had to affect Mills in some way—remember, the London Gazette would quite soon also publish a notice that Mills relinquished his commission due to "ill-health" on 3 November 1943.

Hadow was laid to rest at the Rangoon Memorial in the Taukkyan War Cemetery, the largest of the three war cemeteries in Burma. The following is recorded on-line at the website Britain at War: 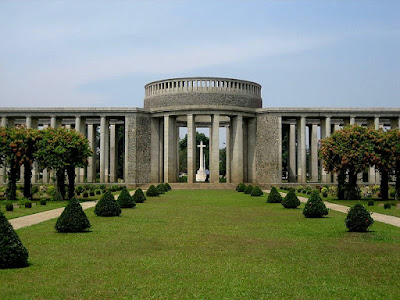 At the memorial, inscribed on a frieze in the rotunda that is surrounded by the graves of over 6,000 men, an inscription reads:

1939 - 1945
HERE ARE RECORDED THE NAMES OF TWENTY-SEVEN THOUSAND
SOLDIERS OF MANY RACES UNITED IN SERVICE TO THE BRITISH CROWN
WHO GAVE THEIR LIVES IN BURMA AND ASSAM BUT TO WHOM THE
FORTUNE OF WAR DENIED THE CUSTOMARY RITES ACCORDED
TO THEIR COMRADES IN DEATH
Also engraved on the rotunda in English, Burmese, Hindi, Urdu, and Gurmukhi is the additional inscription:

THEY DIED FOR ALL FREE MEN
We don't know for sure how the loss of Terence Hadow, just 21 years of age at the time of his death in Burma, affected Mills. We do know that Mills was ailing after the death, and that he never again wrote a book.

Did the Second World War and its consequences cost George Mills some of himself, a part that he could never really recover?

As always, additional information, ideas, and informed speculation are most welcome!
Posted by Sam [Also known as Harry] at 11:34 AM