A Wonderful, Brief Glimpse into the Mills Family 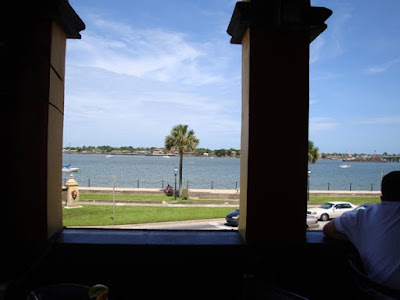 It's Sunday afternoon here in Ocala and dark clouds are now relentlessly marching in, accompanied by intermittent thunder. It appears Janet and I got back from an overnight in St. Augustine, Florida [pictured, in an image taken in the heat of the afternoon from the cool,open balcony of the Acapulco restaurant], just in time.

I'm sunburned and lethargic after a weekend of pool, sangria, waves, margaritas, sand, and too much sun. I've had this message on the backburner for a couple of months now and with St. Augustine on my mind, you'll probably see why I think it's finally time to post it.

It may be as much as we'll ever know about the George Mills family personally. It just seems unlikely that, unless a cache of letters, photos, and ephemera were to suddenly surface, we will do much better than this oblique, tantalizingly slight contact with someone who'd actually met them all. Much of the family information to which she refers can be found in an entry I posted on 4 May that you can read by clicking here.

It seems there will not be any more information than this, so we may as well make the most of this, and be thankful for this lovely message! [I've added emphasis to names.]

Hello Sam. I am one of Selma's daughters. My mother was delighted when I told her about your e-mail. (she is not computer literate so I act as her assistant in such matters. ) She has gone off to the funeral of a friend this weekend so I shall confirm what I can meanwhile.

Your research is correct. In fact, I learnt from it, as I did not know the names of Ottilie, Mordaunt and Verity's siblings who had died before Ottilie was born, which you said were Hubert and Jocelyn.

Yes, Dudley is my great-grandfather, and there is large painting of him in my mother's living room, as well as one of his father Sir Arthur Mills, MP (1816-1898). My mother has very happy memories of staying with Dudley and Ethel at their home near the Beaulieu River, "Drokes". As far as I knew, Dudley, a royal engineer (& Colonel) for the British army, only wrote an article on his 1886 journey through China. It was published in the March 1888 number of the Royal Engineers Journal: "A Journey through China". I do know that Dudley donated his wonderful map collection to the University of Manchester. You can find it on the web, under Mills and Booker map collections, The John Rylands University Library. Did he also write a book, then??

Dudley and Ethel had 3 children who grew to adulthood, as you already know. Ottilie did marry Michael (my grandparents), and had 3 children, Selma, Thomas and Henry. Ottilie went to a sort of alternative school called Bedales. She was always the first in our family to see art exhibitions, theatre productions, etc. She was a wonderful grandmother, too. Verity did marry Neil. Verity was a beautiful dancer, my mother always said, and later on in life she made elegant, colourful 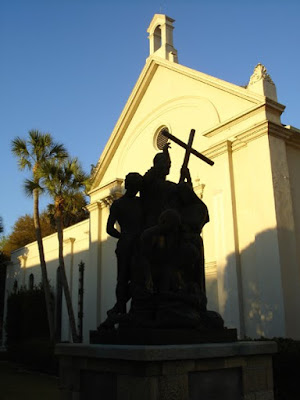 woolen crocheted shawls for us all. She and Neil had 2 children. And Mordaunt never married but was a lovely uncle and great uncle to us all. He had a factory that produced mostly wooden-handled cutlery in London, and later had a beautiful house and garden in Malta, where he became a sort of patron for the arts. His home became a place where arts were taught, and artists gathered. Ottilie, Verity and Mordaunt were all very close.

My mother does remember Barton and Edith, and has been in touch with Brigadier Hallam Mills, from Hampshire, relatively recently. She said Violet and Agnes were "charming and very keen on the girl guides".

I don't know if any of this is interesting to you. Are you writing a book?? Related somehow??

In fact, the only time we went to Florida (which I gather is where you teach) was with Ottilie. I can see her now amongst the dunes near St. Augustine, wearing a long flowing elegant scarf over her legs. We watched the first landing on the moon from the hotel there.