Last Sunday was rolling along smoothly. I put down my new grass seed and really soaked it to keep it moist on its first night out of the sack. I cut back some outdoor plants that almost didn't survive the bitter cold of our record-breakingly frigid winter here. And I pronounced some others dead.

After getting cleaned up, I checked my e-mail and found one from David Wingate, a distant relative of George Mills. He'd sent me a few things of great interest. One item, though, saddened me, but also made me question how much I actually know about George Mills and his family.

Here's a segment from one of those weekend messages:

This is an obit of my grandfather, Maj. Reginald Ramsay Wingate, DCLI. One of the wreaths was sent by Violet Mills (Cadogen Gardens, London S.W.).


Now, Violet Mills is George's younger sister [born 1902], and she's mentioned in the obituary dated 19 March 1938 [above left, and at right]. Violet would have been 36 at the time, the same year that George was publishing his second book, King Willow. George had dedicated that text to the exceptionally mysterious and elusive "Eaton Gate Preparatory School" in London, so I've assumed that's a place where he had recently worked, if he was not still on the staff list at that time. Either way, it did seem safe to say that George Mills and his wife, Vera, were probably somewhere in or around London, circa 1938.

Where his siblings were at that time, however, was open to conjecture. I can find no record of the passing of George's mother, Edith Mills. She had been living in her father's home at 7 Manson Place when he passed away in 1920, and I have no reason to believe that Edith wouldn't still have been living there with her unmarried daughters after her husband, George's father, Rev. Barton R. V. Mills passed away in 1932. After 1932, however, it becomes unclear where and when anyone may have moved, all the way through to Agnes and Violet Mills both passing away in Devon in 1975. George is listed as having died in Devon in 1972.

Major Wingate's obituary pinpoints Violet as living in Cadogen [Cadogan] Gardens, S.W., in March of 1938 [below, left]. Not only that, Violet isn't listed here alone: The wreath is from "Misses Barbara, Agnes, and Violet Mills." 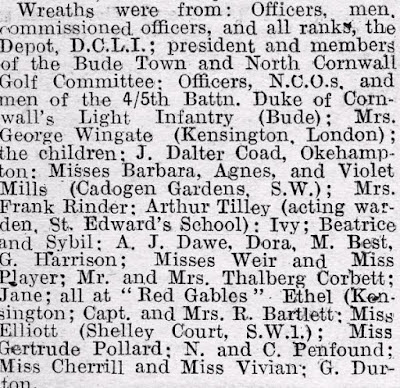 Agnes and Violet are George's sisters, born in 1895 and 1902 respectively. But who in the world is Barbara Mills?

I found myself in need of a family member that could have produced a daughter named "Barbara Mills," and it didn't take me long to sift through George's Uncle Dudley's offspring to find out that Barbara was not a first cousin from that family.

Uncle Dudley is listed as having issued "a son and two das." in the 1911 edition of The Plantagenet Roll of the Blood Royal's Mortimer-Percy Volume. Col. Dudley Acland Mills had married Ethel Joly de Lotbinière, a French Canadian, in February 1896, but finding the names of their children and anything much about them is far trickier.

I believe that Mordaunt Mills survived into adulthood because I found a reference to a Mordaunt Mills in London in the 1930s, when he would have been in his twenties. With so many on-line references to Sir Arthur Mordaunt Mills, however, finding anything about a Mordaunt Mills has been more daunting than other searches—or would that be Mordaunt-ing?

Anyway, if the Plantagenet Roll is correct, that leaves Ottilie, Verity, and Mordaunt alive in 1911, aged about 9, 6, and 3 years, respectively. By 1938, these three would have been 36, 33, and 30 years of age. Had they children by that year, Ottilie's would have been called Huxleys (and likely born in Canada) and Verity's would have been little Forsythes.

Only Mordaunt Mills could have had a legitimate child with the last name of Mills by 1938. Is it reasonable to assume that he probably wouldn't or couldn't have fathered the child at an age younger than 16 or so? If that assumption is correct, any child of his in 1938 couldn't have been much older than 14 years of age.

Now, Agnes and Violet were about 43 and 36 years old in 1938. Assuming that the wreath sent to Major Wingate's funeral was from those two and possibly a teenage daughter of Mordaunt Mills, would they have listed the young girl first? Perhaps it would just be a modern tendency, but wouldn't Agnes and Violet have been listed as they are—in sequence of their ages—with the youngster to follow, not to precede them in signature on the wreath? 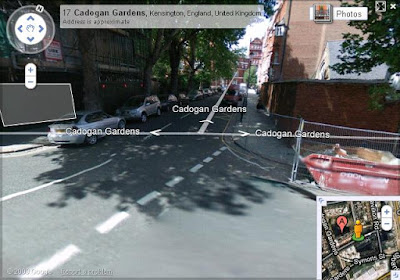 It seems highly unlikely that Barbara Mills was a daughter of Mordaunt Mills living in Cadogen Gardens with Agnes and Violet. So who else could Barbara Mills be?

George's grandfather, Arthur Mills, had a brother, Rev. Henry Mills, who married Mary Hippisley in 1841. They had three children, Catherine [who married Rev. Alfred Freeman in 1882], Francis [who married Selina Mary Knightley in 1877], and Fanny. As far as I know, Fanny Mills never married.

Francis Mills, however, had four children, three daughters and a son: Mabel Frances, Phoebe, Esther Mary, and Henry Valentine Mills. Henry was born on 23 November 1881 and is of a perfect age to have had a daughter similar in age to Agnes and Violet in 1938.

I also found this, though:

That doesn't say anything about Henry and Frances having had a child before 1917. If they did, it's possible she could have been called Barbara Mills.

Now, it's also possible that Barbara is a descendant of William Mills, the brother of George's great-grandfather, Rev. Francis Mills, of Barford, Warwickshire.

They are both great-grandsons of William Mills, mentioned above, and appear to have passed while still childless, also finalizing that branch of the Mills surname in 1917.

I'll admit: I'm at a loss to come up with another female with the surname of Mills who was likely born around the turn of the 20th century into the family of George Mills—but I am, as always, open to suggestions!