Things pile up around me as I do this—at least figuratively because almost everything is kept here on the computer I'm using—and sometimes I realize it all doesn't get put on-line in nearly a timely enough fashion. Sometimes I think that if there actually was a pile of dog-eared papers scrawled with notes at my elbow I'd be better off than with my laptop's desktop strewn with an myriad of amazingly similar looking little files with titles like "haiti_1923_lady_d" and "nswopen".

Anyway, here's word from the redoubtable Barry McAleenan, regarding a recent post:

Just another coincidence...I attach a scan of a contemporary newspaper report about Michael Ockenden's Meads story. Eastbourne was a very easy and frequent target for the German hit-and-run raiders at this time. It's a good thing they failed to realise that there was a massive radio communications centre in the farm behind the Beachy Head radar site.

Thank so much, Barry!

It truly is amazing how the various threads of this story weave together. Having just stumbled upon the involvement of George and Arthur Mills in the Second World War and wondering aloud about the conditions in Britain during the early war years, this fits in beautifully. At this time, George is still in the Royal Army Pay Corps, and would be for several more months. 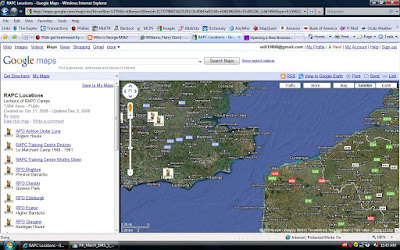 Despite being from Cornwall and having powerful relatives in Devon, George certainly showed a proclivity to spend his time in Sussex or London, if possible.

There's an RPO in Brighton as well as ones in Richmond and Hounslow [pictured, right], and presumably they were there during the Second World War as well [Thanks to the wonderful website, Royal Army Pay Corps; you'll find the interactve map HERE.]. I'm laboring under the assumption that a man of Mills' age wasn't sent abroad to sit beneath khaki canvas and dole out pay to soldiers near the front, but I'll freely admit that could be wrong about that. Still, it seems likely that Mills was at least somewhat near Meads when this terrible event occurred. Is it unreasonable that, with people he cared for enough to write a book about living in Eastbourne at the time, might he have spent some time on the telephone making sure that his friends were all safe?

Rather than take anything out of context here, I've simply included the entire article here for your perusal as a primary source [the second page is at left]. Each of these images should open in a new window when one clicks on it, and then clicking the resulting image should enlarge it entirely to full size.

Again, I appreciate any and all of the clues, details, and bits of information you provide to help me flesh out George Mills, his family, and his friends and acquaintances, as well helping me reconstruct something of the physical and temporal world in which he lived—a world I often have trouble conjuring out here amid the heat, horse farms, and palm trees of central Florida in 2010.

Thank you very much!