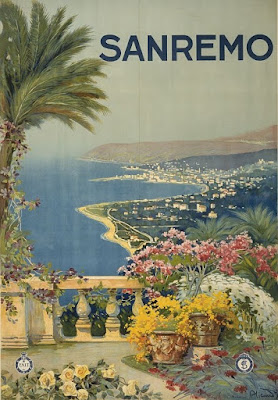 The Rev. Barton Reginald Vaughan Mills, who died suddenly at the age of 74, was the eldest son of the late Arthur Mills, of Budehaven, Cornwall, formerly Conservative member for Taunton and for Exeter. This is the family of Mills of Bisterne, Hants, to which Lord Hillingdon belongs. Mr. Mills's mother was Agnes Lucy, daughter of Sir Thomas Dyke Acland, tenth baronet. He went to Harrow in 1870 and then Christ Church, Oxford, where he took second class honours in modern history in 1880. After serving curacies at Battersea, Broad Clyst, and St. George's Hanover-square, he was vicar of Poughill, Cornwall, from 1887 to 1889, vicar of Bude from 1891 to 1901, and assistant chaplain of the Chapel Royal, Savoy, from 1901 to 1908. In the War he served as an Army chaplain, and had held a general license in the diocese of London since 1926.
Mr. Mills was joint editor of "Select treatises of St. Bernard of Clairvaux" and author of "Marks of the Church" and "Fundamental Christianity." He founded the Association for Improving the Status of the Unbeneficed Clergy, and was hon. secretary of the Society for the Protection of Women and Children. He married, first, Lady Catherine Mary Valentia, sister of the seventh Earl of Buckinghamshire; she died in 1889, leaving a son, Captain A. F. H. Mills, D.C.L.I., who married Lady Dorothy Rachel, daughter of the fifth Earl of Orford. Mr. Mills married, secondly, in 1894, Elizabeth Edith, only daughter of the late Sir George Dalhousie Ramsay, and had a son and two daughters. He had been a member of the Athenaeum for nearly 40 years.
The funeral service will be at St. Saviour's, Walton-street, Chelsea, on Monday, at 2.30.

George Mills's father had passed away on 21 January

This obituary certainly confirms some speculation and fills in one of the gaps in my time line of the Rev. Barton R. V. Mills's life.

In 1880, Mills was awarded the Oxon Bachelor's Degree mentioned above. We knew that Mills had been ordaine 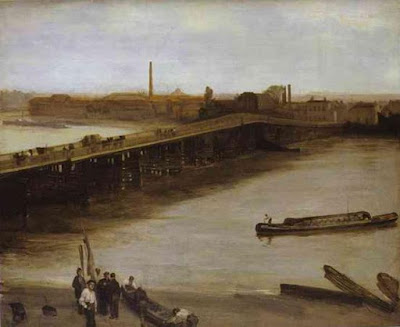 d a deacon in 1882 and a priest in 1883 in the Diocese of Rochester. If I'm not mistaken, Mills final ordination was documented in the 14 June 1883 issue of the London Times. It was also in 1883 that Mills's M.A. degree was conferred by Oxford.

In December 1884, he's documented as sitting as a priest as a member of the Battersea Committee, chaired by the vicar of Battersea [pictured, right, before 1885, in a painting by J. A. M. Whistler]. In April of 1885, his recent pamphlet and presentation on the sieges of Exeter is reviewed in The Western Antiquary, indicating that Mills hasn't completely let go of his interest in secular history.

In 1886, Barton marries his first wife and becomes "chaplain at San Remo" for a brief time, not documented in the obituary above [but pictured at the very top of this post because I really like that poster]. Mills and his pregnant wife were likely driven from the Italian Riviera by a destructive 1887 earthquake, and he is immediately installed as vicar of Poughill.

Now, everything above is seemingly in strict chronological order. It mentions that after being ordained, Mills served the "curacies at Battersea, Broad Clyst, and St. George's Hanover-square." 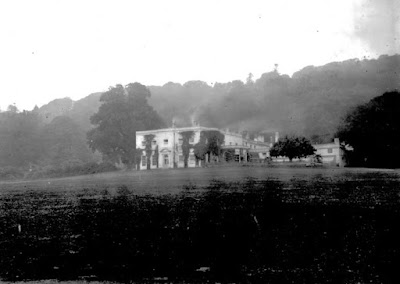 Broad Clyst looks to be about 5 km from Exeter, where it appears Barton read his "sieges" paper during the winter of 1884-1885. Broad Clyst was also the home of Sir Thomas Dyke Acland, 10t bt., a man with whom Mills had spent a good portion of his childhood at Killerton [pictured, left, circa 1890] while his father, Arthur, was away, often traveling to the colonies in North America, India, and the South Seas. Sir Thomas himself had died in 1871, but there was still family at the estate.

Let's assume it was likely that Barton was in Broad Clyst for a least the winter of 1884-1885, where he would have used local resources, including the archives of the new Royal Albert Memorial Museum, to research his paper. 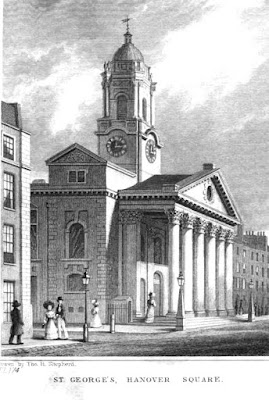 Did Barton meet Lady Catherine while he was there, near Hanover Square? It's probably more likely you'd meet a girl from Buckinghamshire in London than in Exeter, don't you think? That would imply that he was at St. George's long enough to have pursued a courtship and married by July.

It would be interesting—at least for me—to know why Mills bounced around a bit in the mid 1880s. He had a rich and powerful father, rich and powerful relatives, and a university degree of some prominence. I mean, Oxford's a pretty good school, right?

However, it seems to take an Act of God—the Ligurian Earthquake of 1887—to get Barton a vicarage. However, I'm not well aware of what works may have been required of a young cleric in advance of becoming a vicar in the late 19th century.
On the other hand, Barton's life seems to have been one in which he never stayed put in a position for much longer than a decade, no matter what.

This propensity to move about professionally seems to have been passed along to his son, George Mills, at the time an undistinguished schoolmaster, referred to only in passing in the obituary above.

[Many thanks as always, Barry Mc, for all of your research! Also, you can get more on the life of the Rev. B. R. V. Mills here (Part 1), here (Part 2), and here (Part 3), and information on his memorial window in Bude here.]