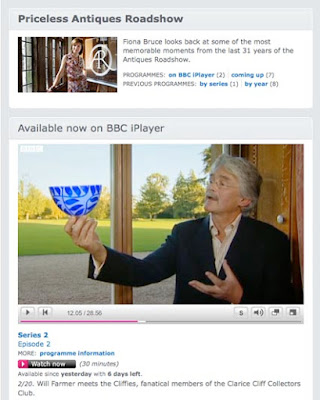 One just never knows what he might find while browsing around the internet and poking his nose into the affairs of others!
From Ask The Antiques Road Show Experts, 21 June 2008:

Q I would like to know more about my table, which came into the family through my great grandmother, Lady Elizabeth Patricia Maule (1846-1941). Can you help?

A This is a lovely sofa table and a very good example of high-quality cabinet making in the late 1840s /early 1850s. I'm sure it is London-made, although I would dearly like to be able to examine it to get a better feel for the piece. Sadly, this type of Victorian furniture has hardly increased in value since a high point in the 1970s, but I think it would make between pounds 3,000-pounds 5,000 at auction.

I'd love to see what the table looked like in the magazine—there was no accompnaying photograph on-line!

The anonymous sender of the question would be related to both George Mills and David Wingate, a good friend of this site.

Also, this was sent to me just today by Barry McAleenan, and it involves members of the Acland family of Devon, relatives of George Ramsay Acland Mills: 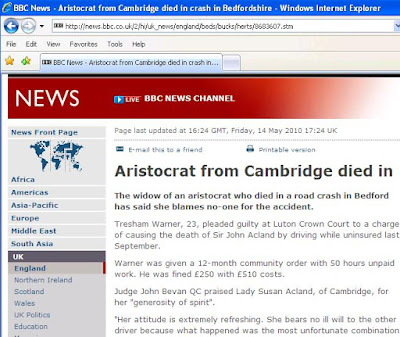 Tresham Warner, 23, pleaded guilty at Luton Crown Court to a charge of causing the death of Sir John Acland by driving while uninsured last September.

"Her attitude is extremely refreshing. She bears no ill will to the other driver because what happened was the most unfortunate combination of circumstances," he said.

Natalie Carter, prosecuting, said Warner had bought the van for £100 the day before which was described as "tired but roadworthy".

The MOT expired just hours after the accident on 25 September and it was due to be serviced.
Warner had insurance for another vehicle and mistakenly believed he was insured to drive the van.

'Car swerved'
He was driving along the A421 out of Bedford, near Eastcotts, when something fell from the engine.
He pulled off the road, but there was a patch of oil in the carriageway.

Lady Susan, who had had advanced driver training, was driving a Toyota Yaris with her 70-year-old husband in the passenger seat.

Mrs Carter said: "She saw the van on the verge with its hazard lights on.

"She swerved to avoid the object in her carriageway that had fallen from the van, but hit the patch of oil causing her car to spin out of control and crash into the van."

Her husband died from head injuries the following day. She sustained minor injuries.

The couple lived in Cambridge Place, Cambridge, and Sir John was the 16th Baronet of Columbjohn in Devon. He had three children.

Warner's barrister Alan Edge said: "There is not a day goes by when he does not have this on his mind."

Thanks to David, Barry, and everyone else! Have a great weekend...