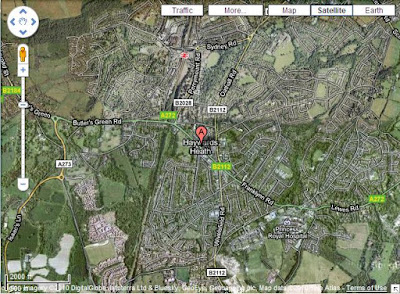 Rounding out the week, here are a few words on my recent writings from the savvy and sagacious Barry McAleenan. They have been culled from a variety of sources, and poorly plastered together here by yours truly…

On Haywards Heath, and my 'virtual' ride along Cuckfield Road this week:

"There is now no Cuckfield Road in Haywards Heath, but a road from Hurstpierpoint (going northwards) to Cuckfield is so-named in places. The coming of the railways to HH blew Cuckfield out of the water commercially. It had thrived as an overnight stop for the coaches travelling from London to Brighton. Apparently, this is why it is to be found on so many 'older' maps."

"In the days before post codes, the full postal address effectively included the chain of sorting offices, and with the coming of the railways, this would have changed. From Wikipedia (for background):

• On 10 January 1840, the Uniform Penny Post was established throughout the UK, facilitating the safe, speedy and cheap conveyance of letters, and from 6 May could be prepaid with the first postage stamp, known as the Penny Black.

A dedication would tend to abbreviate the address, thereby denying us the actual village where the school may have been, and assuredly tell us where the main railway station was."

So, if I understand correctly, Parkfield may not have been in Haywards Heath per se. The alleged relationship between any past Parkfield School and Cuckfield would only have been established by the fact that there are now, along the internet, a few mentions of a "Wick and Parkfield School" on Cuckfield Road. The websites that school is mentioned on are of fairly recent vintage.

Barry continues: "There is a prep school in HH called 'Tavistock and Summerhill' who may be able to offer you an answer that may help."

I'll see what they may be able to tell me, but, ironically, schools can be a very "iffy" proposition when it comes to disseminating information. For every Windlesham House and Warren Hill, schools and communities who embrace their history and freely offer up archival information, there's an Eaton House Prep and a Magdalen College School, institutions that are not disposed to respond to enquiries, at least not to those of an historical nature.

Now, Barry was, as we know, a student at Seaford's Ladycross Preparatory School during the 1950s, and was there when George Mills taught a summer term in 1956. In regard to the changing hairstyles on the children in the Mills books throughout time [and the uniforms as well]: 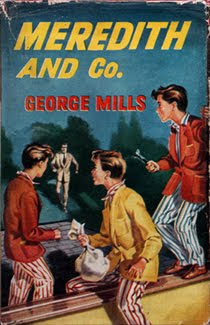 Check out Teddy Boys in Wikipedia on
http://en.wikipedia.org/wiki/Teddy_Boy_%28subculture%29

We Ladycross prep school boys were living a very isolated existence in the mid-50s: No TV, no radio and a copy of the Daily Telegraph in the Games Room; teenagers had hardly been invented and we were essentially very cowed pre-teenagers. The record player in the Music Room was only used for classical music on 78's. To be specific, the updated hair-styles [on the 1957 edition of Meredith and Co., pictured left] are wrong. We had a 'short, back and sides' cut about once a month, leaving us tousle-haired and essentially ungroomed [pictured, below, right] - not long and slicked back [per Vernon]. I think we would have considered that look to be a bit 'spivvy'. A few boys came back from holiday with Crew cuts.

Blazers and short grey flannel trousers were Sunday-best so not likely for japes and scrapes. The white edging on blazers in the school photo was used to signify that cricketing colours had been awarded. 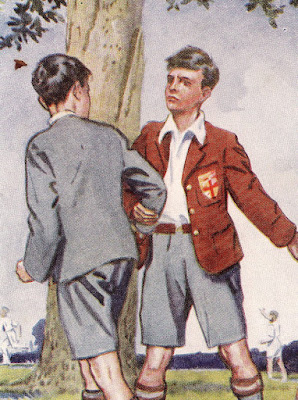 I can't speak for other schools since we only met them in sports kit. In the summer we wore fawn 'Aertex' short-sleeve shirts, red tie, khaki shorts with a 'snake belt', ankle socks, and sandals on a daily basis, with a V-neck school pullover when the weather was bleak. We had full-length dressing gowns - not the jacket-style theatre dressing-room look. Pyjamas were not quite as bold-striped [pictured above, left] as your Uncle Sam's trousers.

I rather like writing these emails, so keep on asking the questions. I hope you are making sense of the contemporary vernacular!

I hope I am, too! It would seem the Brocks [C. E. and H. M.] both seem to have had the correct hairstyle of a prep school boy in place, as described above. The long hair illustrated by "Vernon" [circa 1957] wouldn't have been quite accurate, so it seems that hair might simply have been updated to nudge sales along. But Barry does point out: "In those less egalitarian times, there were plenty of publications (including comics like The Dandy, and Enid Blyton's Malory Towers novels) that suggest that there was entertainment value in the doings of the posh kids."

I certainly owe many thank to Barry for helping me steer through British history, geography, and popular culture. I can't even begin to say how much I appreciate his patience and his knack for shaping the details of the world I'm exploring!

It's our Memorial Day holiday this Monday and we have a long weekend to celebrate, barbecue, and hit the beach. It was created as Decoration Day after the War Between the States, but was adapted following the First World War. It's a different holiday than our Veteran's Day [formerly Armistice Day] which I believe would correspond with the U. K.'s Remembrance Day.

Nonetheless, it's also the unofficial kick-off of summertime in the U. S., the calendar be damned! Have a great weekend!