Concerning the Last Will and Testament of Mr. John Augustus Nicholay of Iver Grove

Recently there was a metaphorical nut I'd been having trouble cracking. I spent hours over several days trying to come up with something that would help me understand it.

Recently I had a snippet of a passage of a book on-line, along with just a bit of publishing information. Here's the exact cut-and-pasted excerpt I found on-line, one that seemed to be completely unavailable in its entirety [my emphasis]:

I'll admit, a court case involving a reverend on one side of the litigation and the National Society for the Prevention of Cruelty to Children on the other piqued my curiosity. And I have to say that it bore the scent of a possible scandal as well.

I harvested some opinions about what could have been the issue, and the speculation was all extremely interesting. I have to confess, however, that some of the things I'd imagined as possibilities were less savory than any of the informed speculation I'd collected. But I was probably all caught up in recollections of Oliver Twist...

But that's sort of the fun of doing what I'm doing. I'm more or less on an archaeological "dig" into the life of George Mills, and when I find an "artifact" I have to try to identify it, date it, and fit it into both the timeline and the body of knowledge. Sometimes the data tells the story explicitly, and other times it makes me feel like Othniel Charles Marsh, trying to stick the wrong head on the Brontosaurus skeleton and hoping it will fit. Sometimes it does, and other times, well, not so much. 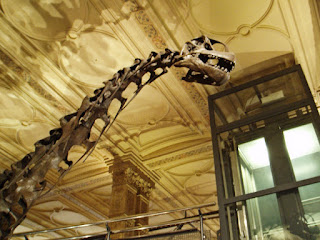 Sometimes an "artifact" causes me to question both the timeline and the body of knowledge I've constructed. Yesterday's unexpected and puzzling discovery of Barbara Mills is an example of a renegade bit of information that's making me take a long, hard look at what I think I know about the Mills family.

The answer to my question about the court case involving the Rev. Barton R. V. Mills mentioned above was far simpler than I imagined. In fact, I know someone who frequently says, "The answer to almost all of your questions is money." It turns out that in this particular case, that's exactly right!

Here's an e-mail I received this morning from the National Society for the Prevention of Cruelty to Children:

Thank you for your email about the 1920 House of Lords Appeal case NSPCC vs. James Scovell Adams, George William Barber and the Reverend Barton Reginald Vaughan Mills.

I don't have any records about this case, but I do know that it was concerning the will of Mr. John Nicholay. The case concerned a clause in the will which left about £7,000 to "the Society for the Prevention of Cruelty to Women and Children". The question was whether the NSPCC or the Associated Societies for the Protection of Women and Children were entitled to receive the bequest. The Rev. Mills was the Secretary of the Associated Societies, the other gentlemen being executors of the will. The source for this information was The Times newspaper, 10 December 1920.

PS. I wonder if this John Nicholay might actually have been John George Nicolay, the biographer and secretary of Abraham Lincoln?

I hope that this is helpful. 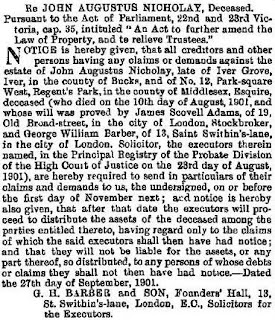 It also appears the tugging went on for quite a while—I believe John Augustus Nicholay of Iver Grove died in 1901. His executors, indeed, had been Adams and Barber.

Having read Bleak House, I do have to wonder how much of the £7,000 was left for the Associated Societies after those years of legal wrangling between 1901 and 1920.
And the fun may not have stopped there: I also stumbled upon a death notice of an Emily Nicholay, a widow from Iver Grove in Buckingham, who passed in 1919. The executors of her will? James Scovell Adams and George William Barber, of course!