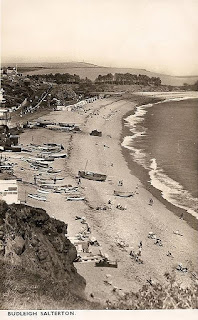 Since I've been stalking George Mills, I never quite know what to expect when I open my e-mail each morning. Here's a note from Barry Mc today:

Is this why you were asking about Grey Friars?
Kind regards

The text he's referring to is a letter published on page 11 of the London Times on Wednesday, April 8 1959:

TO THE EDITOR OF THE TIMES

Sir,—When my father was a young boy he lived with his parents at Bude, and would frequently drive over to evensong at Morwenstow, where the eccentric and much beloved Reverend R. S. Hawker was the vicar. They would always be accompanied by two big black retrievers, Belle and Achille, who would wait outside the church while the service was going on.

On one occasion during the sermon Achille came into the church and walked up the aisle looking for my grandmother, who took him by the collar to lead him out. Hawker, who loved dogs, stopped his sermon. "Let him be, Mrs. Mills, there were dogs on the ark." During the rest of the sermon Achille sat motionless on the pew apparently listening devoutly.

What a great story! The father would appear to be our Rev. Barton R. V. Mills, the grandfather would be Arthur Mills, along with his wife, Lady Agnes.

There were two places on the internet where I found a reference to that location, one spelled Grey Friars and one spelled Greyfriars, both in Budleigh Salterton, Devon. One was from a biography of Vera Mills' grandfather, Sir Robert Hart, and the other was a snippet in a book at books.google.com, but its name escapes me at the moment.

The letter is an interesting one! My first thought was of a Vicar of Dibley episode in which Geraldine actually welcomed animals to church based on the same premise. It's also interesting that this story would be of a very old vintage--the 1860s. George never met his grandmother, and his grandfather passed away just days after George turned two, so the story must have been quite important to Barton Mills for it still to be told by George [and likely his sisters] so much later in time. I imagine it made its way into a number of Barton's sermons as well. 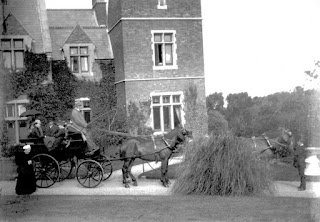 You may already have seen it, but I've attached a photo of George's grandfather, Arthur, preparing for a drive in the early 1890s [pictured, right]. It's another image that stuck in my mind as I read the letter!


Thanks very much, Barry!

He followed up with this wonderful line: It's not for me to say whether this George Mills is your George Mills. I'm counting on your skills as a pedagogue - not merely a pedant! [A very British joke of my own devising.]

Thanks.... I think! Anyway, I decided to check and see if the dates matched up well enough for this George Mills to indeed be "my" George Mills, complete with a family from Bude. I was soon fascinated by a peek I took into the life of the Rev. R. S. Hawker this afternoon, and followed up with this:

It seems too coincidental for this not to have been the George Mills of my interest. The fact that the family had lived in Bude and Barton's boyhood [he was born in 1857] would have overlapped the end of Hawker's career fit in nicely. And, as usual, something like this [from Wikipedia] always seems to crop up where the Mills family is concerned: 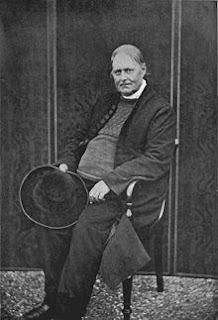 "Hawker died in August 1875, having converted to the Roman Catholic Church on his deathbed. He was buried in Plymouth's Ford Park Cemetery. His funeral was noteworthy because the mourners wore purple instead of the traditional black."

He [Hawker, pictured at left] certainly sounds like an exceptionally interesting fellow when one reads of his entire career! Are you familiar with him?

In thinking about Mills' books, the quality of the character of a schoolboy or a master was often equated with his fondness for dogs, especially Uggles the bulldog. It sounds like it was a family trait!

Yes, it does seem like the above letter references the Reverend Barton R. V. Mills, et al, in Bude. And I can't help but notice that, once again, the subject of conversion to Roman Catholicism seems to trickle into a story about Anglican Vicar Barton Mills and family. Hmmmmm... that's quite a few coincidences!

Another nice thing this letter does is place George Mills in Budleigh Salterton, Devon, over a decade before his death there in 1972.

In 1956, you'll recall, Mills was working during the summer at Ladycross Catholic Boys' Preparatory School in Seaford, seemingly a good distance from Devon. Is it safe to assume that Mills may have moved from the southeast to Devon between autumn of 1956 and April of 1959?

Perhaps, but only time will tell! Meanwhile, I invite you to weigh in with your thoughts...