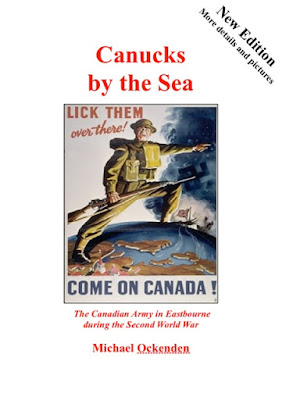 No matter how I may try to breathe life into it, searching for George Mills is really a fairly academic exercise. I do realize I may never know very much about him, his life, or his family. Still Mills was surrounded by living people who knew him and had day-to-day interactions with him. They all helped make up the fabric of Mills' life.

One such person was Eric Streatfeild who would have taught with George (if only as a visiting teacher) in the late 1920s or early 1930s. Streatfeild is linked with Mills, but also to one of the members of the Eastbourne Local History Society [ELHS] who has been helping me a great deal.

Michael Ockenden of the ELHS has come forward with further details of Streatfeild, who taught music at Warren Hill School. Eric does indeed appear on the 1911 census, but the enumerator had misspelled his name as ‘Streatfield’ – no doubt a constant irritation for the Streatfeild family, both then and now. The census has him living in a flat at ‘Coniscliffe’, 22 Meads Street – a mere five minutes’ walk from the school. The other occupants of the house are noted as Frederick Elbro, a 42-year-old bath chair proprietor, window cleaner and carpet beater, his wife Ada Lucy, (aged 41) and their daughter, Ada Valentine (aged 19). This family also had a servant by the name of Ethel Maud Lade, who was 21 years of age.

However, Michael points out that the present house at 22 Meads Street is not the one where Eric Streatfeild lived. That particular house was destroyed, along with numbers 24, 26 and 28, during an air raid on 7 March 1943. The events of that Sunday lunchtime are mentioned in his book, Canucks by the Sea – The Canadian Army in Eastbourne during the Second World War:- “The author was on the receiving end of this raid. I had been invited to lunch with my grandparents and an uncle on leave at 28 Meads Street, but was late because of a broken spring in a clockwork train. My grandmother [Clara Mackay] came to fetch me at 32 Meads Street and arrived just as the bomb exploded at number 28. But for the broken spring, we would probably have been killed along with my grandfather [Glendale Mackay]. My uncle [S D Mackay] was trapped under the debris but crawled free.” 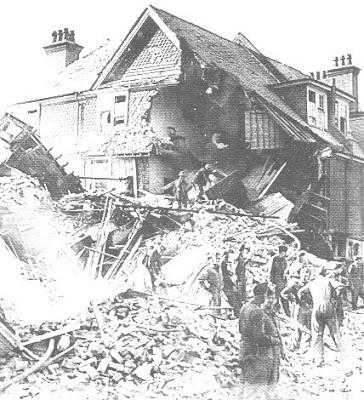 While researching at the BBC archives, Michael chanced upon the transcript of an interview with two of the pilots who had nearly killed him 60 years previously. The returning aircrew were interviewed by reporters of the German Home Service; the interview was broadcast the following day and picked up in England by BBC monitors.

'Coniscliffe', the house where Eric Streatfeild lived in 1911, is pictured to the left - a picture taken on the afternoon of Sunday 7 March 1943 after the air raid on Eastbourne which killed 14 people and injured 50 more. Some of the men clearing the rubble are almost certainly Canadian soldiers, thousands of whom passed through Eastbourne during the course of the war. They shared the dangers and hardships of the locals and many referred to it as their 'home from home'. Some 150 Eastbourne girls had become Canadian war brides by the end of the conflict.

It's certainly all an interesting story, and one that I truly wanted to share. I thank Michael for his permission to do so.

If you're interested in learning more, the book is Canucks by the Sea. The price is £9.99 (plus postage) and the book is available from www.maureenschoice.co.uk with payment in sterling by means of an international transfer, or from www.meadsbooks.com with payment in dollars via credit card. Both booksellers will provide information by e-mail on the cost of postage.

Remember, if you have anything to share about George Mills or the context of his life, please don't hesitate to let me know!