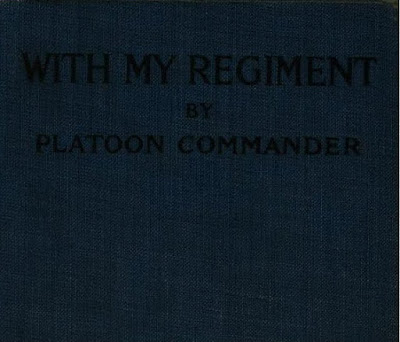 Yesterday, we looked at the later career of Arthur F. H. Mills, the brother of George Mills. Educated at Wellington College and Sandhurst before entering the military in 1908, though, he eventually became a captain and a "Platoon Commander," a pseudonym he used in writing his first book, With My Regiment: From the Aisne to La Bassée [Lippincott: Philadelphia, 1916]—actually a compilation of articles written for The English Review, The Evening Standard, and The Westminster Gazette.

Arthur's writing at this time is measured and a bit stoic, even impersonal, under what must have been very passionate circumstances. As an American, I can't help but stereotypically think of Lieutenant Chard in Cy Enfield's Zulu, only in khaki. According to the book, presumably just after the United Kingdom declared war on Germany on 3 August 1914, Mills is "staying at the time in a large house by the banks of the Thames" with his hostess, a mother of soldiers who "said goodbye to her eldest boy, who was to go with the first troops that left England, arranged for the outfit of her two second sons, and sent for her baby from Eton, whom she saw dispatched to the Royal Military College."

Mills continues, "I went up to London to my rooms to collect a few things." The 1911 census shows Arthur's father, Barton, and his step mother, Elizabeth, living at 12 Cranley Gardens, S.W., in twenty rooms [not counting the scullery, bathrooms, office, shop, or closets] with Arthur's half-sisters, Agnes and Violet, and seven servants. George must be at Harrow. Barton is no longer at the Savoy, having left there in 1908, and its uncertain what his employment at the moment might have been. He still, however, lists his occupation as "Clergyman, Church of England." Arthur's "rooms" still may have been among these, even at 27 years of age. 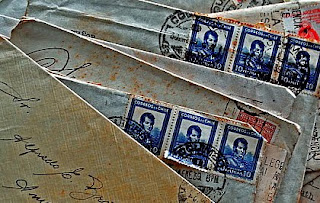 While his landlady helped him pack, Arthur "ransacked drawers [and] came on a bundle of letters and absurd comic postcards. the letters had a faint scent of violet about them. They had to be sealed up and left behind, with directions for their disposal if I didn't come back."

In the most stunningly personal note in the book's introduction, Mills writes: "And there was a photograph to be taken from the mantelpiece and put in a pocket book, a photograph which had been in many places with me. Well, now it must go on its travels again. I got an aching in the back of my throat and hurried to my club for a drink."

About his actual departure, Mills continues: "Many women had come to see their menfolk off, and some to travel with them as far as they could." Does his observation here imply that no one came to see off Arthur as he set off to war, especially no special girl?

Mills would marry Lady Dororthy Walpole in 1916. He's quite obviously not then in the trenches. In August, 1914, he's lingering over violet-scented letters. Are they from Lady Dorothy?

They aren't from Arthur's mother. Arthur was born in 12 July in the year that his father was installed as vicar of Poughill, Cornwall, 1887. The Reverend Mills had just departed from a position as chaplain in San Remo, Italy, and must have arrived to take his new position by July as Arthur is listed as being born in Stratton, Cornwall.

However, Arthur's mother, the Lady Catherine Mary Valentia Hobart-Hampden, passed away on 25 September 1889, the same year his father leaves the vicarage at Poughill. Arthur is just two years old, and Barton, left with a young son, doesn't return to work as a clergyman until taking over as vicar of Bude Haven, Cornwall, in 1891.

If I were a betting man, and I'm typically not, I'd wager it was a photo of his mother that had accompanied young Arthur on his travels to Wellington College in Berkshire, to the Royal Military Academy Sandhurst, into the service in 1908, and off to France in 1914. 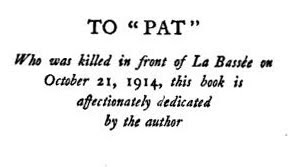 Although locations in the book are almost always deleted with a long dash [the war was continuing at that point, after all], we can assume by his book's dedication [left] that his story takes place at least in some part near La Bassee, a commune in northern France near the border with Belgium, some time after 21 October, 1914. Covered with mud from the trenches while fighting alongside the Dorchester and Westshire regiments, Mills is shot in both legs and evacuated, eventually to Plymouth, where he spends five days convalescing. And, upon being given permission to travel with the intention of ending up in London, Arthur ends the book. 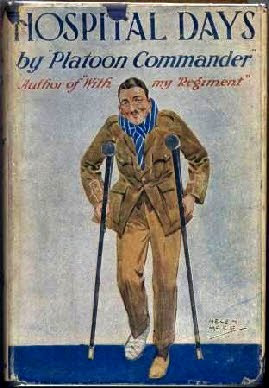 Mills follows this story with a book called Hospital Days [T. Fisher Unwin: London, 1916], and the cover art depicts a soldier standing just as Mills had described himself, waiting to board a hospital ship for England, in With My Regiment: "I smiled gratefully at the doctor, tied the ticket round my neck, put on a woollen waistcoat, muffler, and dressing gown (all presented to me by the hospital) over my pyjamas, and waited my turn to be carried downstairs."

Before, however, on a troop train to the base hospital in Boulogne, Mills recalls in With My Regiment: "The visit from the hospital nurse is one of the things I remember most clearly from an otherwise clouded period. It was the first taste of the infinite sympathy and solicitude which women give to men returned fro the war. All who have experienced it—as every wounded man has in abundant measure—must have felt that anything that he has suffered was worth such a reward."

Mills is definitely implying here that this was the first of his subsequent 'tastes' of the pleasure of feminine attention. While I'm sure his half-sisters met his with pride and affection, there seems to be something that will blossom into being more than just familial within this description.

That's echoed in this tender excerpt from With My Regiment regarding his stay in Boulogne. He had arrived some 10 days after receiving his wounds and awaited surgery: "I had been in the same clothes for a fortnight and they were very muddy, and I remember having my breeches cut off and being helped into a flannel night-shirt. I woke later to find a nurse beside me with a basin of water. 'Would you like to wash?' she asked. I gazed at her apathetically. 'Come on then, I'll do it for you,' she said kindly. She dipped a piece of flannel in the basin and rubbed it gently over my face. Then she took one of my hands and rubbed that; then streaks of white appeared down my fingers as the caked mud was cleared. 'There, I think that is all we'll do for the present,' she said, and feeling beautifully clean—though in reality with ten days' beard and looking perfectly filthy—I lay back on the pillow." 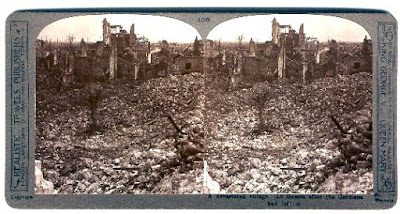 Arthur and Lady Dorothy are listed in records as having been married in Middlesex. Her penchant for travel and adventure—she journeyed abroad with her mother and enjoyed hunting with her father as a girl—likely made Mills a quite appealing suitor upon his return from the horrors he'd endured on the continent [What remained of La Bassée is seen in stereoview, left, circa 1915]. They were soon married, apparently with Lady Dorothy wearing a wedding ring made from the bullet that the surgeon had extracted from Arthur's ankle in Boulogne!

With little household income, Arthur and Dorothy pay the rent in 1916 by each publishing a book, Arthur's text above [which had apparently been first sold in bits to periodicals], and Dorothy's novel, Card Houses.

Lady Dorothy researcher and academic James Earl Wallace has written, "My hunch is Lady Dorothy Mills was a very minor writer who got published at the peripheral of the literary world." If that's true, her listing in the 1933 edition of Who's Who in Literature: The Literary Yearbook next to the entry for A.A. Milne seems at least a bit odd.

Clearly, if Lady Dorothy was a 'very minor writer,' her husband Arthur's career was virtually microscopic—he is not included in the volume—although the fact that the availability of With My Regiment: From the Aisne to La Bassée to this day [You can download it by clicking here and then clicking PDF] gives Arthur a bit of internet immortality that Lady Dorothy doesn't seem to have—yet. 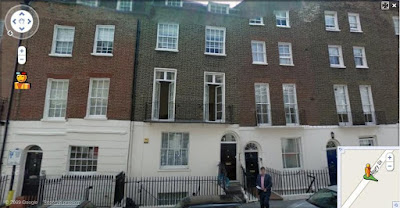 At that point in 1933, apparently, Lady Dorothy lived at 91 Ebury Street, London, S.W. [pictured with open windows, right]. What I don't know is whether that was her residence before, during, or after she was using The Ladies' Empire Club, 69 Grosvenor Street, W., as her address. It was a confusing period of time.

Events had occurred in the lives of both Arthur and Lady Dorothy in the early 1930s that helped their tear their marriage— a union, as we have seen, likley based at least in part on the tenderness shown by a kind-hearted woman toward a wounded soldier—asunder.

But we'll examine those events—and the life of Lady Dorothy Mills—more closely another time.

And, as always, if you've anything to add, take issue with, or want to comment on, please let me know!