Working Out Where Mills Was in the First World War 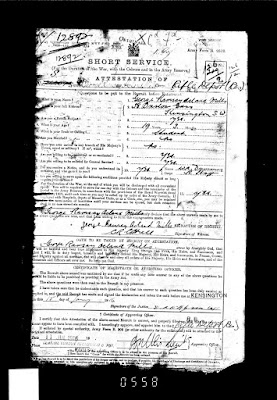 In trying to piece together the service record of George Mills, some of the work must be done by inference. As we saw in the previous entry, Mills was sworn into the army in Kensington, London, on 15 January 1916 and apparently immediately assigned to the "Rifle Depot (Res)." His papers were stamped at Whitehall on 11 July 1916, and you see the original form at left.

Oxford archivist Anabel Peacock has records that show him assigned first to the Royal Rifles, and subsequently to the Royal Army Service Corps. Oxford records the date of his entry into the military as 16 June 1916, though, so perhaps he left home until June, well after he'd been sworn in.

Well, George wasn't the only fellow entering the service in England at the time, so let’s take a look at an exchange I found on-line regarding another couple of soldiers who were enlisting at a quite similar time:

many thanks Ray Hurley 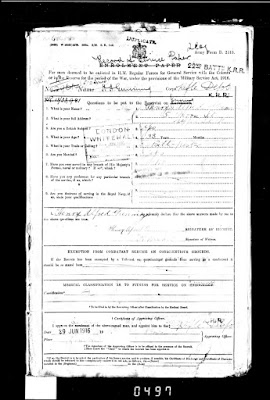 Whilst Arthur Hurley's Service Record appears to be lost, I hope that I can offer a possible timeline for his service by reference to a man who has apparently very similar service.

Now, George's papers had been stamped at Whitehall on 11 July 1916. Gunning's were stamped there on 29 June 1916—less than two weeks earlier. Gunning clearly must have been at the Rifle Depot upon George's arrival there, and given Oxford's record of 16 June 1916, Mills may even have beaten Gunning there!

Gunning obviously had been assigned to the 22nd Battalion of the King's Royal Rifles, but his paperwork must have been stamped with that information later.

Mills, on the other hand, has the letters "R.B." [Regimental Barracks? Royal Battalion?] stamped on his, although it's uncertain to me what that meant and at what time it was done. And, as we saw last time, the letters "MY PAY CORPS" clearly had been typed or stamped near the "Corps" line at the upper right of the enlistment document in a location similar to Gunning's "22ND BATTN K.R.R." stamp. That easily could have been added later. Could it be that Gunning, 33, was assigned to combat immediately, while Mills, 19, might've been seen to need additional maturation and assigned elsewhere? I've always heard it was the other way around. 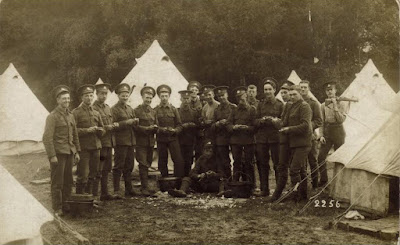 Something else that strikes me as interesting about the above record of H. A. Gunning is that he eventually transfers to the Army Service Corps in late November of 1918. Mills, as we know, eventually transferred to the RASC before the end of the conflict as well.

Would George Mills have followed the same or a similar itinerary into the Great War? It's certainly not beyond reasonable speculation that he easily could have, even though I admit to being ignorant as to how recruits showing up daily at the Rifle Depot would have been deployed, perhaps into the 9th Battalion Rifle Brigade [pictured, left--Is Mills among them?] circa 1916.

Is it safe to say that Private George Ramsay Acland Mills, 24209—or possibly 12892 as his papers have in no uncertain terms been amended—was sent to France, at some point probably joining the Rifles, later in 1916. He may have seen action near the base in Havre, or further afield.

George's brother, Arthur F. H. Mills, had been an officer in the Duke of Cornwall's Light Infantry, and had been wounded at the Aisne in late 1914. 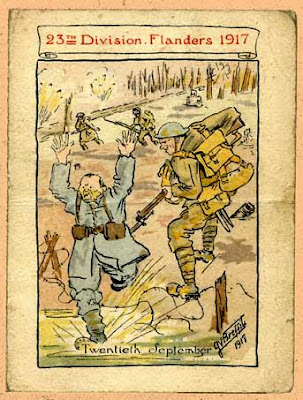 Sometime between 1916 and 1919—Is 1918 a good guess?—Infantryman George Mills received a transfer to the Army Service Corps, a branch of the military whose clothing department had been run by his maternal grandfather, Sir George Dalhousie Ramsay.

It is apparently from there that Mills was discharged from the service in 1919, holding the rank of Lance Corporal. Why does it apparently say "Army Pay Corps" on his primary enlistment document? We don't know—perhaps it was just coincidental, given that George would later re-enter the British Army as a lieutenant in the Royal Army Pay Corps in 1940.

At this point, there's not much else to know about the WW I service of George Mills except to know that, no matter where he had been deployed, he returned safely and enjoyed the benefit of being a veteran to gain admission to Oxford, where he became a student.

Of course, despite having left Harrow some four years before his enlistment in 1916, Mills still listed himself as a "student" on the papers filled out on the day he was sworn in.

Next time, we'll take a look at how Mills might have, indeed, been a student during those "missing years," and a bit of evidence that may or may not back up my speculation…