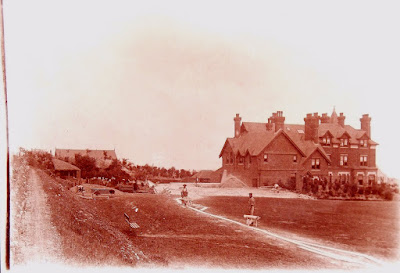 The indefatigable Barry McAleenan is at it once again! Just when we think we've culled all of the archival images of Warren Hill School possible, Barry has sent more—for our personal use in this research [click the images to enlarge]!

Here's a message I recently received from Barry:

The local library found a couple of photos of Warren Hill School taken in 1880. The second assistant was most insistent that copies should only be for personal use - not for books as they have the copyright... The first assistant was affable and helpful. So it goes.

The scanner was unavailable, so I resorted to using a camera and natural lighting from a small window as the flash was far too bright:

Both are stamped BUDGEN BEQUEST

[This image is located above, left]

Reference PG 01316
Builders at work. Note the extensive landscaping that must have occurred. 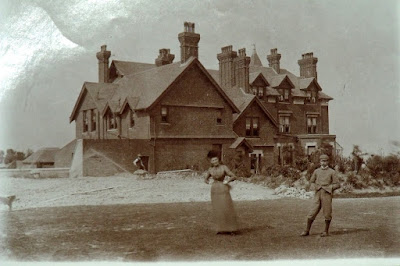 
[This next image is seen, right]

The back says
Building the 3rd Addition to Warren Hill School [Phase 4 since the first sod was cut?]
Photo Genl Buchanan


Are they good enough?

First, it's interesting to note the change from an 1875 Eastbourne map that shows no buildings at all on this site to what apparently is the "third addition" to the main building. There is much to be learned from these images since we know that Warren Hill didn't become a school until 1885!


Right off the bat, we can see that the building layout depicted on the 1930 map [see it by clicking HERE] grew from right to left (east to west), and appears to be growing quickly at the time of these images.

But for what reason? Warren Hill started as a school in 1885, some five years later. Was this the Victorian mansion of a homeowner? If so, why were three additions done in so swift a time—between 1875 and 1880? 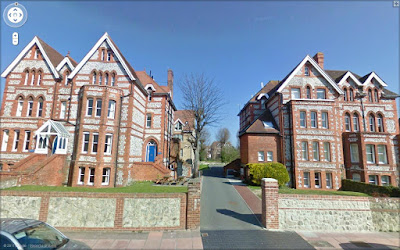 The provenance indicates that these 1880 images were captured by a "General Buchanan."

This is likely Gen. James Buchanan, who appeared on the 1881 UK census living at No. 5, Grange Gardens, in Blackwater Road. He was 63 years old that year, and had been born in Bangalore in the East Indies. His occupation was listed in what appears to be this way: "General [illegible symbol—"H"?] Ind. Army Cavalry." He dwells there with his wife, 54, two adult daughters (one of whom was born in India), and a son-in-law, along with servants.

Incidentally, the General lives next door to a retired Colonel from the Bengal Staff Corps, James W. H. Johnstone, and the Colonel's family—a wife, three daughters, 13 through 21 years of age, and servants—who reside at No. 6.

Grange Gardens [Both No. 6 and No. 5 are pictured today, at left] at Blackwater Road appear to be about a half mile east-northeast of the site where these photographs of the additions to Warren Hill were taken. Just as an aside, but seeing these homes of retired British officers still makes me wonder why Lt. Arthur F. H. Mills, brother of George Mills, was unable to support an allegedly impoverished wife back in England during the First World War (and a promotion to Captain during the conflict did not seem to help). Did wages only become enough to support a wife and consider having a family when one became, say, a Major? And then was one able to afford a home like No. 6 after reaching Colonel?

The index for the files and labels gave the following details


We can now corroborate that the complete roster of principals of Warren Hill were, in order: A. Max Wilkinson, M. A. North, F. R. Ebden, Joshua Goodland, and Bertram de Glanville.

It strikes me as odd, however, that someone might have invested in building this beautiful structure, and spent over five years slowly adding on to the empty structure, turning it into a school for boys headed into the military. It must have first been a home, or even a business, it seems, for however briefly. One wonders why it is identified here as "Warren Hill," and not "The home of Someone-or-Other," even if the annotations were written later. 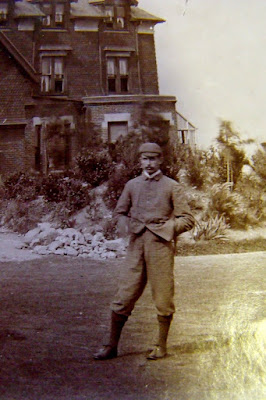 And beautiful this edifice is! We now can easily see the finish of the walls, windows, gables, and chimneys, and what one supposes was the original landscaping to the right [east] in front of what must have been the first part of the structure built.

There's reason to believe that someone constructing an edifice of this size, even for use as a private residence, would have expected a great deal of company. Our assumption that the kitchen is likely located there, in the original structure to the east, remains plausible.

We can also see that the conservatory/greenhouse clearly visible in the sepia image [view it by clicking HERE] is part of that original structure.


Just past the conservatory, to the northeast, Barry writes: "The masters' house appears to be down Beachy Head road and the optimum reproduction scale probably shows it to be behind the man's left ear beyond the lean-to conservatory. It shows up conveniently alone in both the 1899 and 1930 maps. What do think? Number 161 in the parcel (on the 1930 map)."


I had to admit, I couldn't see anything in the image, beyond that left ear [seen, right]. Barry, however, has seen the original image.

Barry continues: "If I look carefully enough, I seem to be able to see a gable - in the mess of tree branches - of what could well be the Masters' house. But it is only discernable briefly if you do a slow zoom!"


Admittedly, I still can't make out a gable, no matter how, but I accede to Barry's careful perusal of the original photograph, and believe that the house across and down Beachy Head Road from the school may have been the mysterious and missing master's residence. 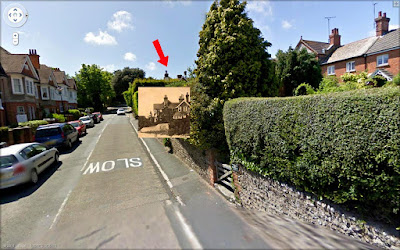 Now, I don't think that house was in the West Ward census from 1901 that I examined here a few weeks ago [see it by clicking HERE]. And my access to those census records from the United States is only searchable by people--I need surnames, at least. Once I "hit" someone in that locale, I can search it entirely, including all surrounding dwellings, but I can't enter it in any other way. Without the name of someone living in that home during the late 19th or early 20th century, I can't check census documents to see if it may, indeed, have been chock full of schoolmasters!

We can see further evidence of the house to which Barry refers by examining the vintage image of it from the post card photograph as it is inset against a screen shot of the road as it appears today [pictured, left], captured from Google Maps Street View. We can see that, while some modifications have been made, the real structure of the dwelling's chimnneys still are exactly the same!


Lastly, these old photographs indicate that I must flip-flop one again in my speculation regarding the age of the post card image (seen by clicking HERE) of Warren Hill School that we have previously discussed. I had originally thought that it must have been the oldest of the images, but changed my mind to it being the newest—perhaps more recent than 1930—and thinking it simply must have been "antiqued." 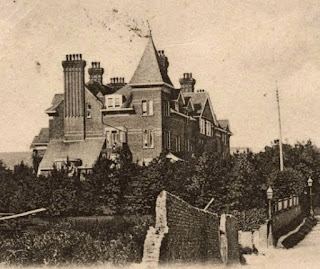 Still, that didn't explain the flatness of the front façade of the building, facing Beachy Head Road. These 1880 images depict the structure before the final westward additions have been built, and it seems likely to me that the front of the building would not yet have included the bulge in the front that is missing in the image on the post card.

Hence, I believe that the post card image is the oldest of Warren Hill [seen, right] out of the original three I received from the Eastbourne Local History Society, and nearly identical in overall structure to these latest 1880 images found in the library by Barry Mc!


Once again, I owe Barry a greater debt of gratitude than I could ever begin to express. His resolve and ingenuity have helped me grope my way along the way here at Who Is George Mills? and I am most grateful.

As always, thanks, Barry!