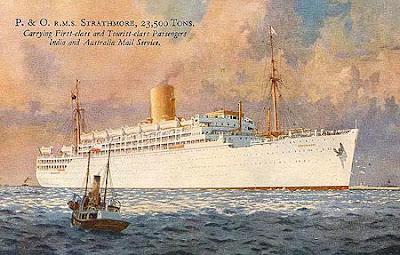 If you've been following our thread regarding Joan Warwick, we've looked briefly at her childhood and more deeply into her career as a hockey player and manager. In fact, we vicariously went along via press reports as she toured New Zealand and Australia in 1938. Sailing back to England aboard the RMS Strathmore, she returned to her home in Peterborough to write a still noteworthy book on women's hockey umpiring.

Still, our interest in her began as a croquet player, particularly while living with her brother, Guy Warwick, at Sherwood on Westfield Road in Budleigh Salterton. The unfailing Chris Williams of the Croquet Association has some knowledge of the area and weighed in on Wednesday 29 June with this:

With regards to their house Sherwood, I think it was 3 Westfield Road and looks as if it had been turned into flats. Two houses in Westfield Road (3 and 5) (on the left as you go up the hill) have been knocked down and a small estate is being built on them. The view on Google Street View was taken early in the building process. When I was last there about a month ago the houses were nearly finished.

Blue Cedar Homes are the developers. 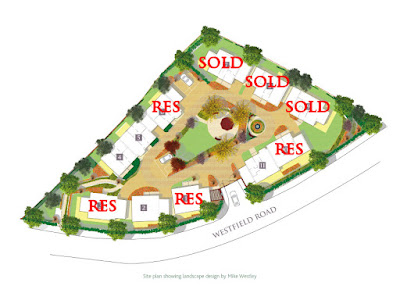 By clicking on the link above, one can get a better look at changing Westfield Road than available through Google Maps. From this, we can surmise that Guy and Joan lived at the far end of Westfield from their neighbours and croquet comrades, George, Agnes, and Violet Mills.

However, that's not all Chris sent. From the archives of the CA, he also provided us with this, Joan Warwick's obituary from the September 1973 issue of Croquet Gazette:

Not a few croquet players have become attached to Budleigh Salterton, because of Joan Warwick. She always had a welcome for everyone, and especially for new visitors, so it seemed natural to see her - albeit in a wheelchair - at the club on the Monday of their big July tournament. What courage this must have taken was only realised when on Wednesday morning, July 4th, she died.

Joan had learnt her croquet from her brother Guy and after playing in a tournament at Budleigh Salterton they decided to move there together in 1957, a happy and successful venture for them both. That year Joan was selected for the Ladies' Field Cup and for the next twelve years she and Mrs Rotherham dominated Women's Croquet. Joan won the Ladies' Eight and the Women's Championship five times each. She appeared four times in the President's Cup and was a much sought after Doubles partner, winning the Mixed Doubles Championship with three different partners. But the peak of her croquet career came when she was the only woman included in the 1963 Triangular Test Tour of New Zealand, which she also toured in 1927 as a Hockey International. 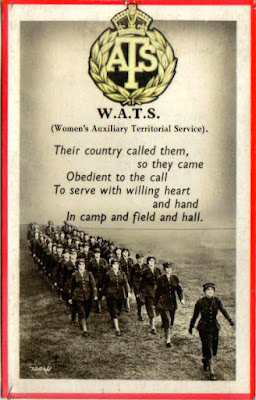 Joan excelled in other spheres besides sport. She was commissioned in the A.T.S. at its inception and helped to form it; she ended the War as a Senior Commander. She then trained as a Housing Manager and did invaluable work in Paddington until she had to return home to look after her mother, herself a well known croquet player. After serving as a County Councillor for the Soke of Peterborough, Joan originated and organised the Home Help service there. After retiring she became a regular driver for the hospital service and only gave up reluctantly when she became ill a year ago.

It is hard to believe we will not see Joan again; standing solidly with her left foot forward, swinging her mallet determinedly on its straight low course and keeping her head severely down while we watch the ball speeding to its target. She was a staunch friend, unselfishly sharing her knowledge and generous with her advice and praise. Joan's personality and style has left its imprint on croquet.


What a remarkable woman, and what a pleasure it is for me to help ensure that her complex and generous life and legacy are not forgotten. And all that from someone who, as we know, simply listed her occupation as "home duties."

And for readers in America (and anywhere else), who make up a large portion of those dropping by this website, the "A.T.S." mentioned above was the Auxiliary Territorial Service, and much more can be learned about it at http://www.atsremembered.org.uk/, where Mr. Williams was kind enough to direct me. An interesting note is that then future Queen of England, Elizabeth II, joined the A.T.S. and rose quickly from Subaltern (equivalent to a Lieutenant) to Junior Commander (Captain) by the end of the Second World War. She "completed the course at No. 1 Mechanical Training Centre of the ATS and passed out as a fully qualified driver."

It certainly is a very limited list of characters we've studied here who outranked the Queen at any time, as Joan would have done as a Senior Commander (Major)! Warwick was decommissioned in 1945 upon "attaining the age limit," according to the London Gazette, 10 August 1945, page 4073, but found other ways to continue to serve the people of her country.


Joan is also remembered on-line by the Wrest Park Croquet Club [below, right] in a 2010 newsletter that can be found at http://angliacroquet.co.uk/2010/Wrest_Park_newsletter_2010_12.pdf. 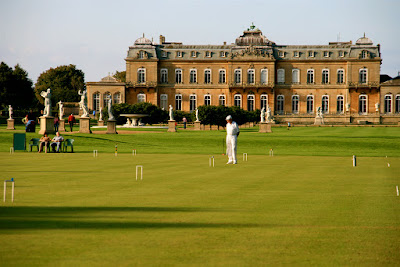 This cup has a history. It is inscribed Bedford Croquet Club, Steel Challenge Cup, Class C, and the first winner was Muriel Hume in 1929. The cup was presumably donated by or associated with Dorothy Dyne Steel. Today Class C means players of handicap 6-11 (A being 2 or less and B 2-5), but this may not have been the case 80 years ago. We also don’t know if the competition was for handicap or advanced play. Of the 22 winners between 1929 and 1956 sixteen were women, and women won on the last 11 occasions. I leave it to others to describe how and when we acquired the cup, but it reappeared as a club trophy in 1985 when the winner was John Wheeler.


The winner in 1955 was Miss E.J. Warwick. Joan Warwick was a first-class hockey player before taking up croquet. Described in Prichard’s History
of Croquet as “a dogged player of the orthodox 4-back and peg type, cautious and careful,” she won the Women’s Championship on five occasions between 1960 and 1968, the Ladies Field Cup five times, and the Mixed Doubles three times. She played in the President’s Cup on four occasions and was also in the victorious MacRobertson Shield team which travelled to New Zealand in 1963.


Some 25 years after her glittering farewell dinner in Australia, following a playing tour of New Zealand with the All-England women's hockey team during which she served as manager, Joan returned to play yet another sport—and win.

One last note regarding Joan Warwick can be found in 1973's The Bedside 'Guardian': A Selection from 'The Guardian': Volume 22 by William Leslie Webb, as we can see in this excerpt: 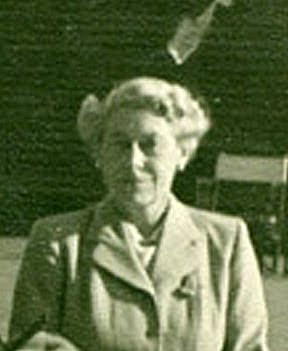 "And some of the people to beat are Hope Rotherham [pictured in 1957, left] - with a mysterious swing from somewhere behind her which nevertheless operates brilliantly - and Kitty Sessions, and Joan Warwick. They follow a trail blazed by Mrs Joad, first women's champion in 1869. How far have they come in a century of decorous aggression? Are women likely to be found in the England line-up for the MacRobertson Shield in the Tests against Australia next year? Not very likely… though male pre-eminence seems to lie not so much in their strong wrists as in their friendships with computers."


Exactly how much computers have allowed male players to dominate since 1973 would be for others to determine, but at that time—near the end of her life, in flagging health, and aged 75 years—Joan Warwick was still considered one of the "people to beat" in what appears to have been the increasingly male-dominated sport of croquet.

Records and statistics pertaining to her career—spanning 1954 –1972, and throughout which she won a stunning 60% of her games—are available by clicking HERE.

We already know she went 18-15 against her brother Guy, who ironically taught her to play. Regarding other players we know, she went 45-40 against the above-mentioned Hope Rotherham [by far her most frequent opponent], an amazing 21-1 versus Barbara Chittenden, 21-4 facing Nora Elvey, a devastating 15-1 against Agnes Mills, 9-3 against both Isobel Roe and Betty Prichard (author of the obituary above), 6-4 versus Maurice Reckitt, 5-0 facing Lady Ursula Abbey, 5-2 against Ralph Creed Meredith, 2-2 vs. Dacre Stoker, only 2-7 playing Bill Perry, and 1-1 when pitted against Violet Mills. She suffered her greatest number of defeats at the hands of croquet legend Pat Cotter, against whom she was 3-19.

I think it is also remarkable that Warwick—a woman, and almost 65 years of age as well—made the roster of the 1963 MacRobertson Shield team. With there being some some debate, as seen above, about the ability of women to play at this level and on the world stage, let's take a look at her performances during that significant January 1963 event, her return trip to New Zealand after 25 years: 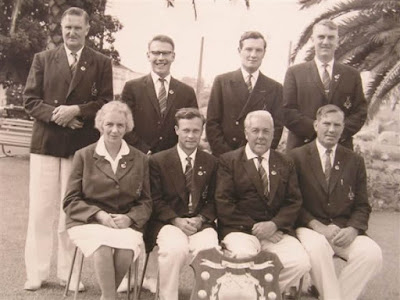 
That 1963 MacRob team from Great Britain is depicted, right:


As noted above, Joan passed away on 4 July 1973. She truly exemplifies the qualities of what has become known as the "Greatest Generation."

In thanking Chris Williams for generously providing Miss Warwick's CA obituary, I added that sometimes I am floored by what I learn by doing all of this. I pry in a tiny way into the life of a person, but what I often find is merely data--birth, death, marriage, divorce, date of arrival, date of departure, etc. [as exampled in the composite image below; click to enlarge] from the London Gazette, 1973 and 1981].

Learning so much additional information about her as a person, beyond simply mere scores and cold, impersonal data, is what makes what I do here so very rewarding. After following Joan via newspaper reports through Australia in 1938, I will then run this obituary separately. I am very happy that it will then be accessible to a wider audience, especially including Americans who never would have had much of a chance to know of her. And I thank Mr. Williams and everyone else who has assisted me along the way in doing my small part in remembering her. She was a remarkable croquet player, but that seems to pale in comparison to how much more remarkable and inspirational she was as a person.


My hat's off to Miss E. J. Warwick as an athlete, a working woman, a volunteer, and as a person. She's without a doubt one of the favourite characters I've met via my research into the life and times of her neighbour, George Mills.

If you have any additional information about or memories of Joan Warwick that you would be willing to share, please let me know!

Oh--and happy Canada Day to our readers from the north!