A Scrapbook of Croquet Memories 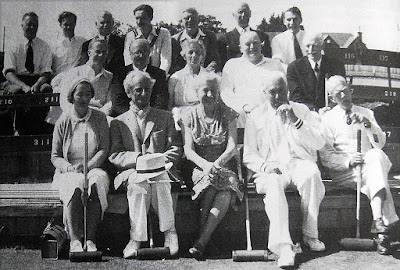 Today, we'll take a look at a scrapbook full of photographs and writing that have been shared with me. They match faces with many of the names we've mentioned here at Who Is George Mills? and should be of interest, particularly to croquet enthusiasts or denizens of Budleigh Salterton—or both! (You can click any image to enlarge it in a new window.)

Our first one, seen above, is scan I received from Michael Downes of Budleigh, and he provides the source volume below, as well as a list of local players at the Budleigh Salterton Croquet Club in 1958, along with a visiting team from London. Michael wrote:

Next up is a scanned newspaper article along with a photograph sent by the omnipresent Barry McAleenan. It describes a tournament at the Saffrons in which Barry's grandfather, Dr. H. R. McAleenan, competed as an octogenarian and won the X Handicap. Pictured is Mrs. Barbara Chittenden, then captain of the Compton Club. 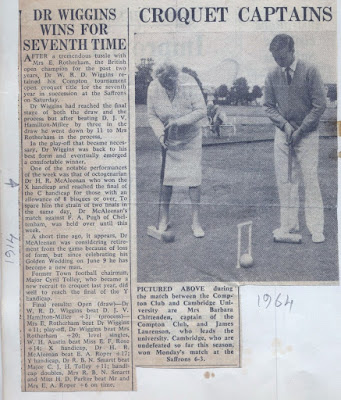 Taking a look at the article, it mentions some familiar names: Mrs. E. (Hope) Rotherham and Mr. E. A. (Tony) Roper, Dr. McAleenan's victim in the X Handicap finals.

Barry adds: "Dr HR 'Herbie' McAleenan was my grandfather. In 1957 he would have been 76 years old, but played on for another decade. Eventually, he gave up on the grounds that the youngsters 'ought to be allowed to win more often.' I attach a cutting from the local paper for 1964. He was born in 1881 and married in 1914. I presume he was a member of the Compton Club."


Next up, we'll see a series of images sent by the extremely generous Judy Perry, daughter of Bill Perry of the Budleigh Salterton Croquet Club.

In the first, below, we see what Judy describes as "Geraldine Cave (2nd left) and Bill Perry(Best Man) (right) at Gerald Cave's wedding to Marjorie in London." 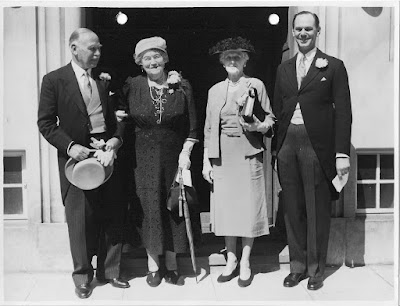 Judy: "Sorry I can't remember date, nor do I know who the other two people are." If you happen to recognize either, please let me know!


Judy continues: "The 2nd photo is a line-up for, I think, the President's Cup, not sure which year (if you can't work it out I probably will be able to). Location looks to me to be the Hurlingham Club, London. They are Back row. Bill Perry, Douglas Strachan, Gerald Cave, Nigel Aspinall, and Roger Bray. Front Row is Bernard Neal, John Solomon, William Ormerod and John Simon" 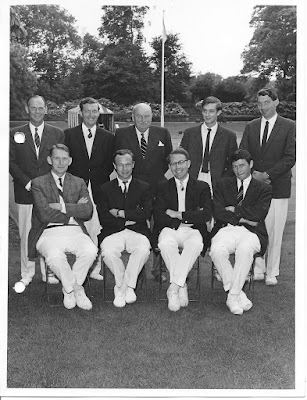 Anyone having an idea about the year, again, please let me know! [Update: From Chris Williams of the Croquet Association: "The President's Cup photo would be 1968 at Hurlingham."]


As well as the above photographs, Judy shared something very special:

I have discovered a poem by Gerald Cave as follows:-

THE BIG FOUR – AN AFTERTHOUGHT
By G.E.Cave.

Nigel & Keith, Roger and John –
Their names are fresh to ponder upon.

Champion of Champions: the title is new;
John keeps his grip on it, what can we do?
Nigel, the toast of Australia, snoops
Round the court, leaving balls tucked in hoops.
Keith is the artist, displaying his zeal
With quadruple, Quintuple, Sextuple peel.
While Roger strides smilingly round on his way,
With a Triple – taken – ‘Three times a Day’.

Solomon, Aspinall, Wylie & Bray:
Which is the one for your money today?

While you’re deciding, remember the skill
Of William & Patrick & Bernard & Bill:
Also David O’Connor, John Simon and Strachan
Who well may come back in unbeatable form.
The future is bright with a host of young stars,
But we do need a Venus to stand up to Mars.

So again I’ll endeavour to sum the thing up –
WHO will part John from his Championship Cup?"


In addition, Judy sent the following colour images. I've included her descriptions with each. 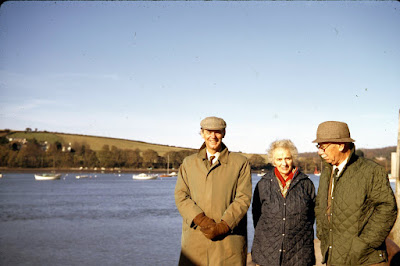 This is a photo taken on the bottom lawn at Budleigh Salterton Croquet Club. Date unknown, (late 60s early 70s?) but several people who weren't locals are in it so it must have been a tournament of some sort. 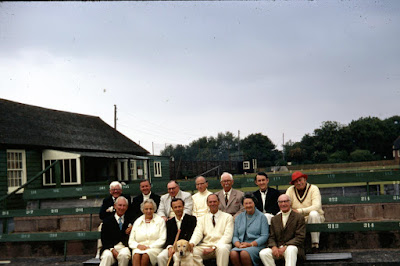 Front Row: Unknown could be Robin Godby who lived in London, Joan Warwick, John Solomon (who was the subject of the poem I sent you by Gerald Cave), Bill Perry + Sally his dog, unknown, Sir Leonard Daldry.


What wonderful image of several of the characters we've been following here. Should you be able to identify any of the "unknowns," please let me know and I'll update this at once!


In closing, Judy also included this:

I thank thee Lord that in my life
Croquet has played a lovely part;
Has found me friends and kept me fit
And warmed the cockles of my heart.

So when I play my final match
May I not have the smallest doubt
That when I've run the Rover hoop
Thou wilt be there to peg me out.


I know that all the croquet players of that generation loved it.


What a wonderful way to close things here this afternoon.

It is difficult for me to express adequately my gratitude for the generosity and kindness of Michael, Barry, and Judy. In fact, my thanks go out to everyone who has helped me along the way!

Next time, we'll return to Warren Hill in Meads and get help from a different source in finding something that's been elusive. Stay tuned…