More for the "Scrapbook"... 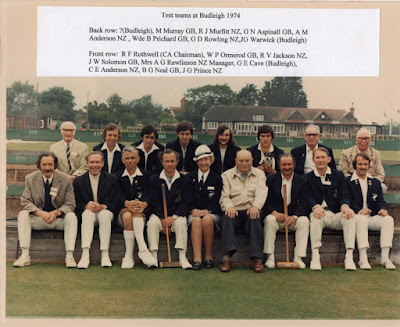 This just in from thoughtful Joanna Healing of Budleigh Salterton, a bit to late to make Saturday's first "scrapbook" (of sorts) of memorabilia:

You may already have this information, but I thought I had better send it to you in case.

First up is the impressive photograph at the left, taken at Budleigh in 1974. We've seen this MacRobertson Shield image before, but only a smaller, black-and-white, low-resolution version that appears on the website of the World Croquet Federation. (Click this wonderful, colour photograph to enlarge it in a new window.) 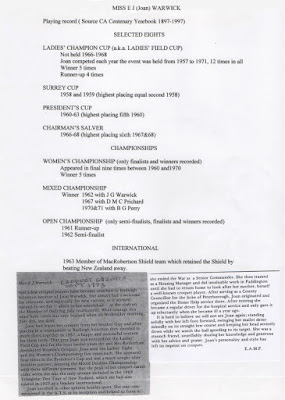 One player above is unidentified—the gentleman in the back row to the fr left—but it is clearly Sir Leonard Daldry. The WCF site records him as having been a referee in 1974. J. G. "Guy" Warwick was also a refree that year, and is pictured opposite Daldry in the back row, far right.

Complete details of that year's competition can also be found at the Croquet Records Site.


In addition, Joanna enclosed this croquet résumé of Guy's sister, the great Joan Warwick, including a scan of her 1973 obituary from the Croquet Gazette. Many thanks to Joanna for her generosity and kindness to an ignorant stranger with a growing love of the sport!
Posted by Sam [Also known as Harry] at 1:43 AM