As regular readers know, some time ago, Michael Ockenden of the Eastbourne Local History Society sent this message: "Another Michael of Eastbourne Local History has turned up these two photographs of Warren Hill School. The first is probably from a postcard and shows the view looking up what is now Beachy Head Road with the school on the left. It's hard to date precisely but one can suppose that it is pre 1900. The masters' residence must be the house on the right. The girls walking down the hill are almost level with a group of flint cottages which still stand."

It's that post card image that interests us today, especially regarding that master's residence.

The last time we looked at Warren Hill School, we determined that the configuration of the structure in those 1880 photographs discovered by Barry McAleenan was essentially the same as the image of the school from the post card mentioned above. Mr. Ockenden's assessment of the image as dating from before the turn of the century was spot on!

The house in the image is now 10, Beachy Head Road, and we've wondered for a while here about the possibility of it being the hard-to-find master's residence. I had searched the "West Ward" census for 1901 and found nothing that could be called a Master's residence, although I did find many homes and flats containing a schoolmaster or two! 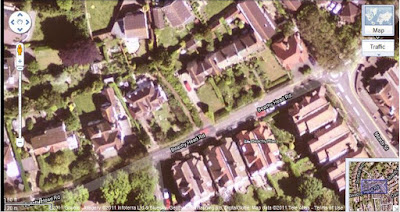 It turns out that the "West Ward" document I could access using the name of Head Master A. Max Wilkinson (giving me access to the census at Warren Hill School that day) did not contain the houses across the street down near what is now the junction with Colistocks Road [pictured above, today]. And the only way of "getting in" was by knowing the name of a resident—shutting me out of those nearby houses completely.

The problem has been solved by the intrepid Jennifer M., a dear friend and a wizard with these census documents.

Here's what she had to say:

I think #6 BHR is “Fairfield Cottage.” It has a family living in it by the name of Broson. I think. The handwriting is old-fashioned and curly. The family members names are Arthur, Orpha, Katie and Edith.

And when I searched, yes, the school itself was in a different district from all the cottages on the other side of BHR.


So, we find that the cottage of schoolmasters was appropriately named "Warren Hill Cottage." You can see the entire page of the census document by clicking HERE. 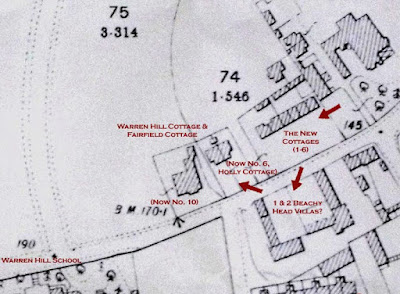 Along the road today, traveling west toward the site of Warren Hill School [as seen, above], we can start at the intersection of Beachy Head and Meads Street. On the right hand side, now recessed off the road and behind a thick hedgerow, would seem to be the "new cottages." We clearly can see cottages number 5 and 6, however, listed on this excerpt from the full census page.

Then the census taker came to Nos. 1 & 2 Beachy Head Villas. They would seem to be the L-shaped buildings across the road, to the south. 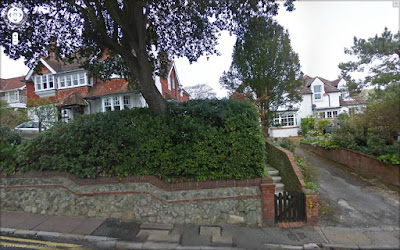 Then the taker went to both Warren Hill Cottage and Fairfield Cottages [seen, above, as they appear today, No. 10 (left) and No. 6]. One of the two buildings would be the master's residence of Warren Hill School, although I might have guessed it would have been what is now No. 6, Holly Cottage. We'll never know, however, the exact path walked by the census taker on 31 March 1901.

What is particularly interesting would be to know if the cottage was owned by Warren Hill School. We know the school's grounds encompassed land along Carlisle Road up to Boston House, which is now a girls' school. Could that tract of land have extended east to include the cottages mentioned above? Or did the school simply rent a house for the use of the schoolmasters. It would seem to have been a fairly posh set-up: In no other residence of an ordinary schoolmaster did we find domestic servants—at least not in the West Ward!

Nonetheless, it would seem the entrepreneurial enterprise known as Warren Hill School would have been flush with assets that went beyond the mere operation of the school early in the 20th century. It is staggering to consider what all of that land would be worth today!

When Joshua Goodland bought and then sold the institution [above], around and during the onset of the Great Depression, it was probably a substantial transaction. It also allowed Goodland to hire a young schoolmaster named George Mills, who is the focus of our research here.

George in all likelihood lived in that master's residence while his wife, Vera, stayed in Knightsbridge with her mother and sister, and described it in his novels. It may not be exciting for everyone, but I'm delighted to have a location for Mills during his time in Meads!

Many thanks to the relentless Jennifer, the Sultana of the Census, for her persistence in locating first, the census document, and then the residence itself. And many thanks for her kindness and friendship as well.