Looking at the Life of J. Goodland: Part 3 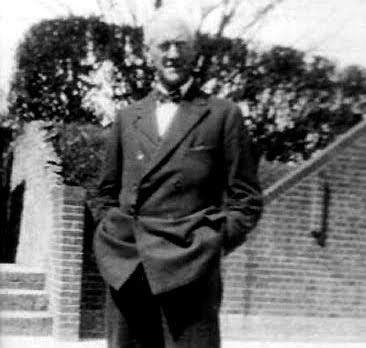 When Gillmore Goodland's family boarded the S.S. Saxonia along with former neighbour Edmund Stephenson in 1918, bound for New York and then Hollywood, their "nearest relative" recorded on the ship's manifest was not Gillmore, waiting in North America.

It was Joshua Goodland [pictured, left, circa 1930; image courtesy ELHS], Gillmore's younger brother, a barrister who lived with his wife, Florence, and his daughter, Josephine, at 144 Ashley Gardens in London.

From everything we now know, Gillmore Goodland financed his brother Joshua's re-education in the field of Law. As we've seen, Joshua had been first an assistant teacher in Exmouth, and then spent most of the final decade of the 19th century in Cardiff, Glamorganshire, as a "probationer," studying to become an architect. He passed his exams and even mentored another architect for a year before eschewing it all and beginning his legal studies at Cambridge in 1901. 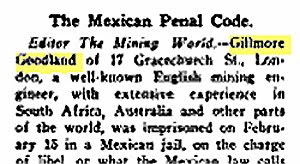 Looking over the life of Gillmore Goodland, it's easy to see why he might have wanted a barrister on hand, especially one he could trust inherently. Gillmore ran afoul of the law on several occasions—a couple of bankruptcy proceedings in England, an arrest in Mexico [right], and a civil lawsuit in the United States. It's clear how very much he liked money. What we don't know is the exact nature of his dealings to acquire it.

Gillmore loved to travel first class in his capacity as a mining engineer and consultant. This proclivity to see far off lands also seems to have rubbed off on Joshua, who spent much of his time during his eight years studying at Cambridge travelling around England, Europe, and the world.

Joshua settled in as counsel on some very substantial cases before the First World War, and worked for the government as an advisor in the Department of Munitions during that conflict. He subsequently was awarded an M.B.E. in January 1918 for his work on behalf of the crown.

Later in 1918, we know he was involved in an extremely high-profile case on behalf of the Department of Munitions and the Metropolitan Water Board of London.

At the end of the war, Gillmore's family's departure from the U.K. in 1918 coincided with Joshua's return to private practice in London.

Goodland had become a barrister, at least in part, to help his brother in Gillmore's frequent dealings with capitalists and investors regarding their mines. Once the elder brother skipped the country, however, Joshua would no longer have had any substantial tie to a profession that really had not been his "first choice."

While Joshua might easily have returned to the discipline of architecture, we have come to realize that that was not his first choice, either. His father had been a "certificated elementary school teacher," and as an adult, he had assisted at the school during his own first steps into adulthood.

By 1 May 1922, we find a ship's manifest of interest. On it, Mrs F.A. (Florence) Goodland of "144 Ashley Gardens" and Miss M.E. (Margaret) Goodland of "Westminster" [both "domestics"] steamed into London from Sydney on the S.S. Borda of the shipping line P. & O. S.N. Co. Ltd. That would be Joshua's wife, Florence, and his sister Margaret, the latter then sporting a Westminster address. That gives us a clue as to how Gillmore Goodland's family was able to live in London while he was ensconced in America from 1915 through 1918.

It also gives a good idea of how close the Goodland family attempted to remain in general, despite the vast distances between and among many of them. It would be uncanny to me to find that Margaret Goodland hadn't been visiting her brothers Ernest and Kenny, and possibly even Theodore, along with her sister-in-law, Florence, whom they had likely never met.

The following years, 1923, 1924 and 1925, reveal telephone listings for Joshua Goodland, barrister, at home in Ashley Gardens and at his offices in the Paper Buildings. 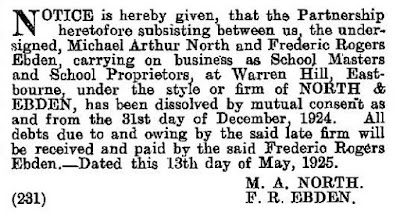 By that time, Joshua Goodland had made a career move. This vocational change also entailed a geographical move from central London to Eastbourne, Sussex. Goodland's new career would begin at a local preparatory school, Warren Hill. Joshua had taught in Exmouth, taken a student under his wing immediately after becoming an architect in 1899, and had served as a law coach at Cambridge and thereafter in London. In some ways, he had always been a teacher, so this shouldn't have come as too much of a surprise to anyone.

Warren Hill School in Meads [below, right; image courtesy ELHS] had been run by Michael Arthur North and Frederic Rogers Ebden under the auspices of the firm North & Ebden until the partnership was dissolved officially on the "31st Day of December, 1924," and announced in the London Gazette on 15 May 1925.

That dissolution, for some reason must have attracted Goodland. Joshua was quite possibly an advisor in the proceedings, or perhaps he heard of it around chambers. We do know Goodland was an enthusiast of golf and loved playing in Sussex in the summer. Joshua turned 52 in 1925 and, although a fit-looking and energetic man, the weight of the law and of private practice may have become a real burden to him, so a move to a quieter setting by the sea may have greatly appealed to him—and why not? 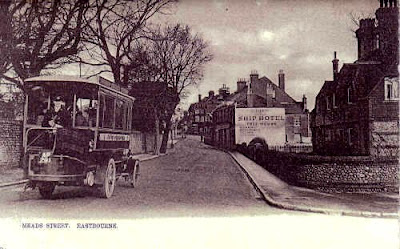 Perhaps it had even been what we today might call a 'mid-life crisis'—a desire to return to the pursuits of a simpler and seemingly happier time.

For whatever reason, Joshua committed himself to a return to the discipline of education in 1925. He likely would have had some savings in the bank, and with experience in the law and in contracts, it would seem that he could have made himself quite valuable to F. R. Ebden while becoming his partner.

Far from being cloistered in Eastbourne and quietly enjoying his waning years, we find Goodland mentioned in Volume 6 of the periodical Hockey Field and Lacrosse, distributed by the All England Women's Hockey Association in 1926. His name is mentioned in an item as having been selected to serve on an "Umpires Sub-Committee." How unusual might it have been for one of the Heads of a boys' prep school to not only serve as an girls' hockey umpire, but to serve on the Association's Umpires Sub-Committee back in 1926?

If anyone needed further proof of Goodland being an avid sportsman, even into his fifth decade, membership on that committee would seemingly do the trick! After that 1926 mention, though, we lose track of Goodland to a degree. We've read a promotional leaflet from Warren Hill, circa 1930, in which his school is described in great detail, and, of course, we've seen Goodland mentioned as being the "sometime Head Master" of Warren Hill in the dedication to George Mills's Meredith and Co.: The Story of a Modern Preparatory School in 1933. It has been assumed that "sometime Head Master" referred to Goodland's partnership with Ebden.

The most interesting post-1926 reference to Goodland, however, is another one from 1930. It's on page 1960 of Crockford's Clerical Directory, published by the Oxford University Press in that year. Although I can only read a "snippet" of the text on-line, it records a list of former and current bishops and priests, among them "J. Goodland,  P.-in-c." following an entry for a "G. Camp,  I." (Did the capital "I" mean 'incumbent'?)

Where exactly Goodland served as a "Priest in Charge" in 1930 cannot be determined from this snippet, but it is presumably somewhere in or near Eastbourne. Wherever he was "in charge," he may have been waiting for bishop to offer an incumbency and change that title to "Vicar."

It seems that Goodland's 1925 love affair with education was a brief one. Perhaps he simply looked at partnership in the school as an investment. Perhaps he found he liked dabbling in education and theology simultaneously.

Either way, we now have a much clearer idea of what George Mills meant by "sometime Head Master" of Warren Hill School. This was likely not a reference to sharing duties with Ebden, but to splitting time between school and church. 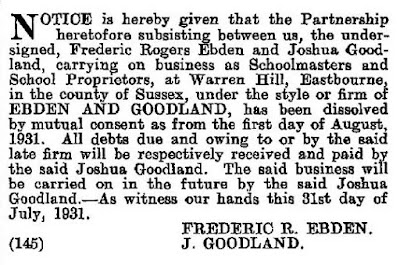 It's interesting to note, though, that Goodland appears amongst archival photographs circa 1930 without any sort of clerical accoutrements. In fact, Goodland looks quite worldly and dapper in a taut bow tie and nicely tailored, double-breasted suit [top, left]!

Joshua Goodland took over Warren Hill School himself in 1931, dissolving by "mutual consent" his partnership with Ebden on 1 August, according to the 7 August 1931 issue of the London Gazette. Goodland resolved to receive and pay "all debts due or owing to the said late firm." Goodland at this point seemed to have been staying the proverbial course. Warren Hill School was all his!

There is no continued entry, however, in 1933. Well, at least not in Eastbourne!

Needless to say (but I'll say it anyway), residing in Twickenham, almost 90 miles NNE of Meads, made a daily commute to Warren Hill quite impossible.

We do know, however, that Goodland at some point sold the school to Bertram George de Glanville, a former long-time magistrate in the Ceylon Civil Service and more recently the Chairman of the Colombo Port Commission, through his final appearance on "The Dominions Office and Colonial Office List" in 1932. 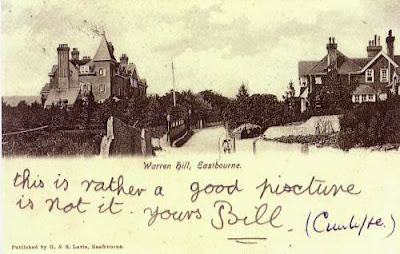 That number at de Glanville's private residence is the same number as had been Warren Hill's. It is questionable at that point if the school still existed, or was simply hanging on perilously, hoping for a miracle in the midst of a worldwide economic depression. 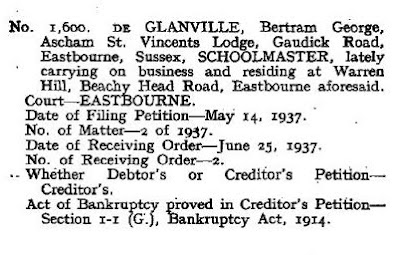 Warren Hill was quite certainly out of business as dawn broke on the year 1937.

Joshua Goodland probably was fortunate to find a buyer returning from decades overseas, a man who was unaware of the financial climate of the times. I hesitate to conjecture that the deal was in any way shady—caveat emptor, after all.

Unlike Gillmore Goodland, who fled his creditors, de Glanville, incidentally, made his debts for "5s. in the £" by 3 November 1937, according to the London Gazette dated 16 November (page 7239).

Goodland, who had been dabbling in religion as well as education, had closed the book on his life as a Head Master.

And next time we'll examine the remaining years of Joshua's life, as well his last career change…