For the next few posts, we'll be making some "quick hits" on various aspects of Warren Hill School, once employer of schoolmaster George Mills, and later the inspirational setting for the books of author George Mills.

First off, it's actually amazing that I am not a thinner fellow with all of the jumping to conclusions that I do!

Recently, we examined a photograph of the school, located in Meads, Eastbourne, and compared it to a map that showed a plan of the school in 1930.

Here is a look at the map plan of Warren Hill and its southern campus, enlarged as well as I can manage without blurring the image: 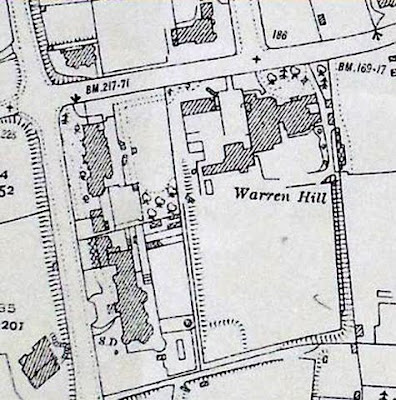 It was my belief that the building addition at the lower left, just above the "W" in Warren Hill must have been either the sick wing or gymnasium described in the undated leaflet written by Bertram de Glanville sometime between 1933 and 1937.

I think I was completely wrong about it being a gymnasium.

Looking at the photograph of it, enlarged below, next to the main building, it would seem to have far too low a ceiling to have been a right gymnasium—unless 1920s British gyms were much smaller in size than those in the United States. 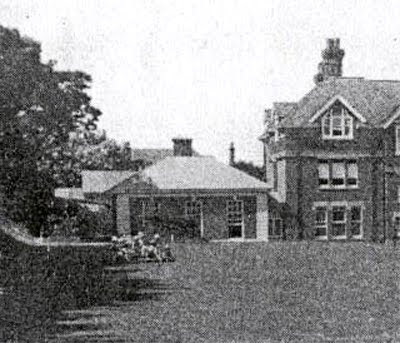 Below, comparably, is another Victorian era prep gymnasium, this time at a school for girls. It seems gym ceilings must have been high, worldwide, and that the addition above would have been far too low-slung to have served that purpose. 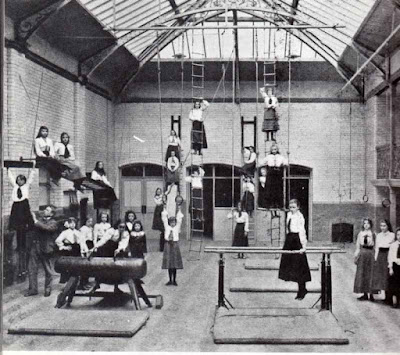 A clue that I'd originally overlooked was actually staring right at me from de Glanville's promotional leaflet, which we looked at once before: "In addition to the big school room, there is a fine library and reading room built as a memorial to those Warren Hill boys who lost their lives in the War."

Wherever that library/reading room may have been, it was built after the end of the First World War—after 1918. It appears that the newer, single story building at the southwest corner of Warren Hill was the "new" library.

The Eastbourne Local History Society's Michael Ockenden once wrote of that addition: "The low structure to the left is probably the house which still stands on the site (50 45 22 95 N and 0 15 52 90 E) - the last vestige of Warren Hill School."

Ground-level access to that exact area via Google Street View is closed off by foliage. It would be interesting to know if that structure does still exist, and if it in fact could have been Warren Hill's library. Behind it, on the 1930 map, we can see another, smaller outbuilding to its north, and one wonders if that one may have survived the school's razing as well! 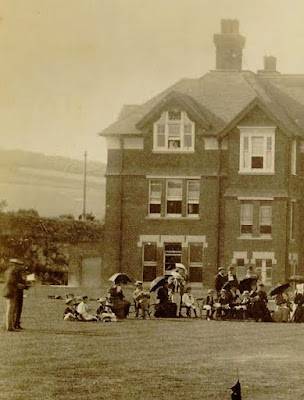 A pre-1900 photograph provided by the ELHS shows that the area originally was occupied by what appears to have been a garage [above], probably attached somewhere along the west wall of the main building, and ample room for an addition honoring the sacrifice made by the boys of Warren Hill in the First World War.

There's good reason to believe that the library would have been added around 1920, and we'll take a look at that reason next time!