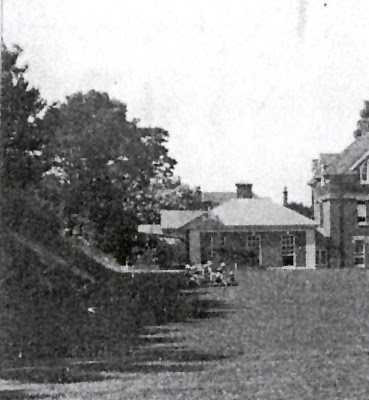 Here's one last "quick hit" regarding Warren Hill School (1885-1936) in Meads, Eastbourne. It may not seem like much, but it does help verify a couple of matters.

Over the past year we have received some photographs courtesy of the Eastbourne Local History Association, and those images have divulged much about Warren Hill. Today we'll look at the specific images of the Head Masters (or at least business partners), Joshua Goodland (referred to on at least one image as "Jim") and F. R. Ebden, Goodland's partner at the time, circa 1930.

First let's look once again at an enlargement of the southeast corner of the main building [above left]. We can see a low, one-story addition that is not in the pre-1900 image from the same angle. We can also see an embankment behind parents watching the cricket game that's occurring outside of the frame.

Warren Hill rested on the south side of Beachy Head Road between Darley Road to the west and Coltstocks Roads to the east. As one traveled westward toward the school, one would have been rising uphill. The above image of the school, however, shows a perfectly level field behind the building—hence the embankment to the left (west) in the photograph.

Let's now take a look at the image taken of "Jim" Goodland around the same time [below]. 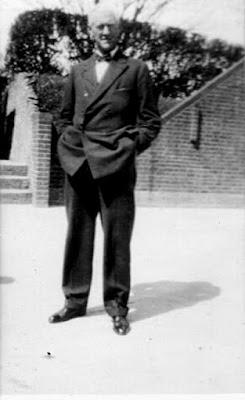 Goodland appears to be standing, facing southeast by judging the position of the morning sun, on a level concrete slab of some large dimension—a playground.

Behind him we can see what is obviously a retaining wall and steps upward, off the playground, to the west-northwest. And that's just where we would expect a retaining wall next to a level area, given the uphill rise to the school's west.

The Goodland photograph gives us an idea of how developed the playground area was, including some very nicely conceived brickwork rising at about a 45° angle behind him.

We also have an image of Ebden taken the same day, and have every reason to believe it was taken nearby. In the image at the top of the entry, we can make note of its light-colored roof of the lower building, its large windows, and distinctive wide, white corners at each end of the wall.

Let's take a look at the circa 1930 photograph of Ebden [below], quite probably captured the same day as the image of Goodland. 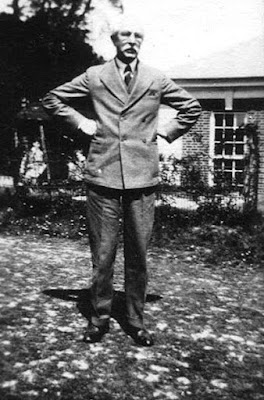 Ebden faces directly into the morning sun, revealing behind him a background to the northwest. We see foliage and the ground rising slightly as the image proceeds to the left—the west. Also behind the one time Head Master is a low-slung, light roofed building with large glazed windows of panes and muntins. Finishing off the image and disappearing behind Ebden's dated double-breasted suit is the white-coloured corner of the building finishing the brick façade.

This building clearly is built too low in the roof to have been an adequate gymnasium for a boys' preparatory school, reinforcing our notion that the large windows provided fine light for reading in the school's library/reading room, which had been a built as a memorial to alumni lost in the First World War.

We can see on the area map below where Goodland [red] and Ebden [blue] must have been standing when those photographs were taken, giving us some better idea of what the grounds looked like there to the west of the school. Each man is represented by the 'dot' in the center of a circle representing the possible area photographed. 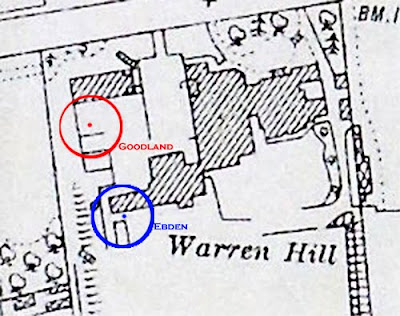 Incidentally, also behind Ebden there appears to be a fenced in patch of ground that may have served as the garden of one of the boys. Perhaps students were not welcome to plant in the glass-walled greenhouse to the east, but were welcome to tend small plots in the southern exposure near the new library.

Your thoughts on my speculation, your memories, and your ephemera would be most welcome, and thank you!