Looking at the Life of J. Goodland: Part 4 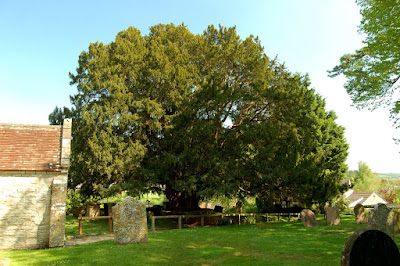 There is a 1600-year-old yew in the Old Churchyard in Compton Dundon.

I was born just outside of Philadelphia in Haverford Hospital and grew up in the next community over, Broomall. I'm not sure of the age of Haverford Township, but Broomall was founded in 1682.

I now live in Florida, just a 90 minute drive to St. Augustine, founded by the Spaniards and the oldest continually inhabited city in North America. It was established in 1565. Walking through the main gate into the old city always seems a trip back in time.

However, if the yew were to be exactly 1600 years old, that meant that the seed split open and the moist green tendril would have taken root and begun its life in the year 411. 411!

That's staggering for an American—relatively speaking we're barely out of nappies— to wrap his or her mind around fully because, as opposed to something like Stonehenge, a Roman aqueduct, or a Saxon sundial, the yew is living, breathing, and still shading the ancient churchyard. And there's little here that's nearly as old—living or dead. 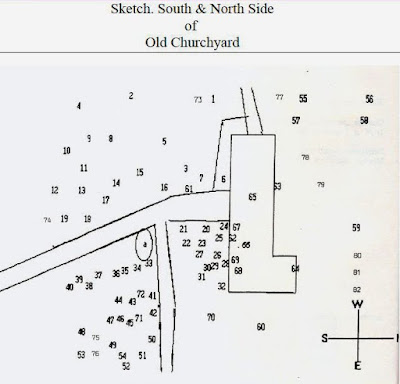 At right, you see a diagram of the Old Churchyard indicating the locations of the memorials to those buried there.

At Number 73 the headstone reads:

Josua Goodland was no longer a "priest in charge." He had become vicar in the charming village of Compton Dundon in Somerset.

When last we met, Goodland had sold Warren Hill Preparatory School in Sussex to Bertram de Glanville in the depths of the worldwide depression. The year was probably 1933 based on a change in telephone directories. His name was removed from the school's listing in Eastbourne, and the name Joshua Goodland cropped up at the River House on St. Peters Road, Twickenham, near Hounslow in Greater London.

The impetus for selling Warren Hill, however, may not simply have been the Great Depression (although it would be foolish to think it did not play some role). Rather, the record shows that in 1932 a woman named Josephine M. Goodland married a gentleman named Bernard M. Lowe in Marylebone. Josephine was Joshua and Florence Goodland's daughter, and there is a real possibility that she is the younger woman in the archival photographs from Warren Hill, circa 1930, just before her marriage.

Based on telephone directories, Bernard was an estate agent on High Street in Heathfield, about 20 miles due north of Eastbourne.

Her death record indicates that Josephine Mary Goodland was born on 23 May 1910, probably while Joshua was on the "North Eastern Circuit," but there is no available record recording her birth. She appears on the 1911 census [left] as a 10 ½-month-old infant living with her mother in Hertfordshire. There was a servant at home at the time, Mary Kate Grey, a 26-year-old listed as "Dom: Servant Nurse Housemaid." There was also a "visitor" in the home that day, 2 April. He was a 25-year-old, single "student-at-law" named W. A. Bainbridge.

A couple of oddities jump out. Joshua, 37 years of age, was not at home at the time. He was almost 200 miles away, visiting the family home of a retired tar distiller, John George Lyon, in Pontefract, Yorkshire, which was presumably on his circuit. Part of me wonders why a 25-year-old law student was visiting his 25-year-old wife while Goodland was so far afield. Perhaps Bainbridge was sweet on Miss Grey, who was also single.

The form clearly indicates he either "arrived on the morning of Monday, April 3rd," or "passed the night of Sunday, April 2nd, in this dwelling and was alive at midnight."

Another thing I find odd is that next to the entry for Florence Annie Goodland, she was originally recorded in black ink as "Wife." That entry is amended later in blue ink to read "Head." The numeral "1," written in black ink, is used to record the number of years she has been married, the number of children she had borne alive, and the number of "Children still living." Then a red line is drawn through them all, striking out every numeral.

Finally, Florence's "Personal Occupation" is recorded in crisp black ink as "Married Woman." Subsequently, that information is crossed out several times in blue ink. Still, Joshua and Florence were married in the parish of St. Mary, Finchley, in London on 19 June 1909.

I have no real understanding of any 'colour coding' that may have been used in compiling data for the 1911 census, but something tells me that Florence Annie, far from being a subservient housewife to Joshua, at least may have been resentful of being left alone in Hertfordshire by the father of her new baby. In fact, it is not difficult to surmise that she wasn't enamored of being saddled not only with the baby, but with Joshua as well. Perhaps, if she had been born before the wedding, that may be why there is no real record of Josephine's birth.

Other than some few details of her own marriage in 1932, we know little about Josephine Goodland save that she passed away in December of 1988 in Liverpool, Lancashire. Turning over care of his daughter to Bernard Lowe [his 1934 telephone listing is seen, right], however, could have eased Joshua's mind about his responsibility to her and allowed him to consider his final career change that he was at the very least toying with: Becoming a vicar.

In 1934, the name on Goodland's Twickenham listing changes slightly, giving us evidence of the direction in which he was heading. In 1933, it read: "Goodland Joshua." In 1934, it changes to "Goodland Rev Joshua."

Now, I'm quite uncertain how, in the Anglican Church, one would become a vicar. We've read of the circuitous route that George Mills's father, Rev. Barton R. V. Mills, took from Battersea to the Chapel Royal after he gained a Master's Degree in History from Oxford. Would Twickenham have been a similar stop for Goodland on his way to his own vicarage? And was any sort of education in divinity necessary at the time, or would a law degree from Cambridge have sufficed? 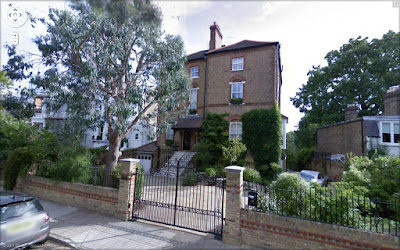 Anyway, the stop at River House [left] in Twickenham was apparently brief: Goodland does not appear in any of the 1935 or 1936 directories, which covered all of Greater London. 1935, Goodland had clearly left town.

How and where Joshua and Florence Goodland spent those two years is open to conjecture at this point. A listing for a "Goodland J" reappears in the London telephone directory, residing at "34 Bloomfield rd E.3," but that listing remains in place in the February 1938 directory—and we know from Goodland's headstone that he began his living in Compton Dundon in August 1937.

Perhaps he spent time with Josephine and Bernard in Heathfield as he sought a living. Perhaps he was tucked away in another parish elsewhere, using a phone listed under another name

Nevertheless, he took up residence at The Vicarage of St. Andrew's Church [below, right] in Compton Dundon at summer's end in 1937.

There isn't much known about his time there, but we know that his long-dormant lust for travel may have been unquenched. 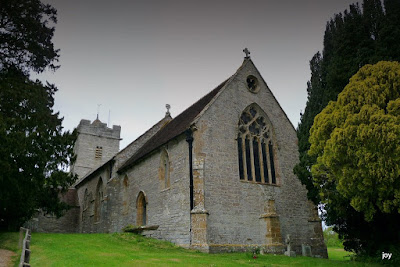 On 16 June 1938, Joshua and Florence Goodland steamed into Avonmouth at Bristol aboard the S.S. Bayano out of Port Antonio, Jamaica. The couple, a 63-year-old "priest" and 53-year-old "housewife" respectively, gave their address as "Compton Dundon Vicg, Somerton, Somerset."

It had been 30 some years since Goodland had been able to travel abroad. We don't know how long Goodland spent in Jamaica, or if this was a vacation or a recuperative trip for the benefit of his health.

What we do know is that Joshua Goodland passed away just months later on 22 January 1939.

The National Probate Calendar for 1939 reads:

Britain was on the eve of conflict with Germany, and the entire world braced for war. It was a trying and anxious time for many in England.

1939 was a banner year for our George Mills, though. After publishing a novel, King Willow, in 1938, he published a pair in 1939—Minor and Major and Saint Thomas of Canterbury.

However, Mills—who had dedicated his only other book, Meredith and Co., to Joshua Goodland in 1933—would never publish anything more than a letter to The Times.

Next time we'll take a look at both Mills and Goodland, how their paths must have crossed, and what influence Joshua must have had on George.