My goodness! I've been fooling around with Joshua Goodland the Goodland family almost exclusively since 26 March. Other items have accumulated on the back burners and getting to them is long overdue.

Continuing my expression of gratitude to the Eastbourne Local History Society, I would like to offer special thank for a message I recently received, and reads:

Here, from the Eastbourne Local History Society with our compliments, is a biography of George Mills, researched for you by my friend Bill Bowden, genealogist extraordinaire!

You, I know, have some of this info already, but I do hope that it adds to your knowledge and will be of some help to you.

Do let me know.

For anyone who is just joining us here, this would probably be a great time to review what we know about George Mills—schoolmaster, author, paymaster, and gentleman.

Here is the document I received, along with the illustrations it included. I only took the liberty of editing a spelling mistake. Its research reflects a great deal of time and effort: 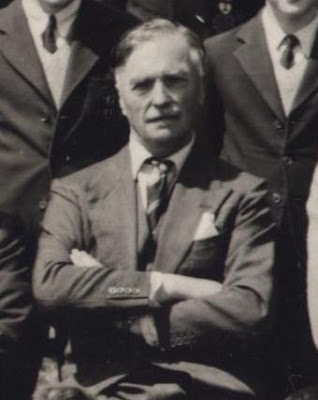 George Ramsay Acland Mills was born on 1st October 1896 in Bude Cornwall. He was the second son of the Reverend Barton R V Mills a holy cleric and scholar who was an authority on the works of Bernard of Clairvaux. His grandfather was Arthur Mills an MP representing Taunton and Exeter and his great grandfather was Sir Thomas Dyke Acland 10th Baronet of Killerton.

After attending Parkfield school in Haywards Heath Mills attended Harrow school from 1910 to 1912. He served in WW1 from 1916 to 1919 beginning as a private in the Rifle Brigade and then transferring to the Royal Army Service Corps. When he was discharged he had the rank of Lance Corporal.

After the war Mills took advantage of a decree from the University of Oxford that until the end of Trinity Term 1923 any member of the university who had been engaged in military service for 12 months or more before their matriculation was permitted to offer themself for examination in the Final Honours School, despite not having met the statutory conditions for admission. Consequently he entered Christ Church Oxford in 1919 and then the university in May 1921. However there are no records to show Mills having passed any examination in the Final Honours School or that he gained a degree at Oxford.

Mills married Vera Louise Beauclerk (1893-1942) on the 24th April 1925 at Holy Trinity church, Brompton. His father officiated at the service along with three other ordained priests. They held a reception at the Hans Crescent Hotel and honeymooned in Devon. Vera was a granddaughter of Sir Robert Hart and daughter of the Duke of St Albans.

In 1925 Mills was a junior teacher at Windlesham School then in Portslade near Brighton where he and his wife bought a house. By the end of 1926 Mills was no longer on the teaching roster of Windlesham school and he then had a number of positions at Warren Hill school Eastbourne, The Craig,Windermere, The English Preparatory School,Glion in Switzerland and then in 1938 at Eaton Gate Preparatory School in London. There is a suggestion that Mills might have been sympathetic to the demands of the strikers in the 1926 General Strike or that his lack of a degree, despite giving himself on his applications, caused him to move. If the former holds any truth his family, as well as his wife’s, may have disagreed with him. During this time his wife did not always go with Mills to his posts but stayed in London with her family. Whilst at Windlesham Mills taught English and was involved in extra-curricular activities such especially in the arts, music and drama.

Warren Hill School in Eastbourne was located in the Meads area of Eastbourne (Beachy Head Road) with a playing field in Carlisle Road. 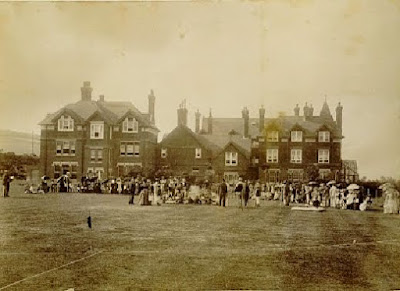 The above pictures are of Warren Hill School.

During WW2 Mills returned to military service and was assigned the rank of Second Lieutenant as paymaster in the Royal Army Pay Corps. He was promoted to Lieutenant on 11th April 1942 three months after his wife Vera died on 5th January 1942 after only 17 years of marriage. On 3rd November 1943 Mills relinquished his commission due to ill health and was granted the honorary rank of Lieutenant.

Mills and his wife did not have any children and Mills did not marry again. He moved to Budleigh Salterton and with his sisters Agnes and Violet became very proficient at croquet, playing at Grey Friars very near to their home. Agnes was a very good player and won the Luard Cup in 1953 at Roehampton. The family played up to the early 1970s.and used to travel to competitions at Roehampton, Eastbourne, Hurlingham and Cheltenham.

In the summer term of 1956 Mills was teaching at Ladycross Catholic Boy’s Preparatory school in Seaford but there is no other evidence to show if he taught anywhere else in the 1950s.

Mills was a writer of tales often revolving around boy’s preparatory schools and involving sports such as cricket, pranks and mysteries, as well as a beloved pet Bulldog named Uggles. His most famous book, Meredith and Co.,published in 1933 captured the idiom of pupils during the interwar years more accurately than other similar novels. 5 years later he published a sequel King Willow. The books followed the maturation and adventures of a group of boys at the fictional Leadham House Preparatory School and were based on Mills experience as a teacher. The third book in the series was Minor and Major published in 1939. Also in 1939 Mills had St Thomas of Canterbury published.

Thank you so much to Michael, Bill, and everyone else at the ELHS for all they have done.

And I invite readers from England, Canada, Australia, New Zealand, or anywhere else to add to what we know about Mills, his family, his careers, his acquaintances, the communities in which he lived, and his era in general.

Thanks in advance for your help!