Searching for the Residence of the Masters

How much land did the school actually possess? We know from Joshua Goodland's freehold listing in a 1931 London Gazette, he held "Warren Hill, Beachy Head Road, and land in Carlisle Road, Eastbourne."

So how do references to a "master's residence" or "house for masters" figure into all of this? Is it possible that, despite owning the land mentioned above, the school rented a home in which the masters could live during the terms?

Let's take a look at some references to the house that we've had already.

From the Eastbourne Local History Society came this description of the post card image we see above, left: "[This image] is probably from a postcard and shows the view looking up what is now Beachy Head Road with the school on the left. It's hard to date precisely but one can suppose that it is pre 1900. The masters' residence must be the house on the right. The girls walking down the hill are almost level with a group of flint cottages which still stand. One of these was rented during various summers by Arthur Conan Doyle." 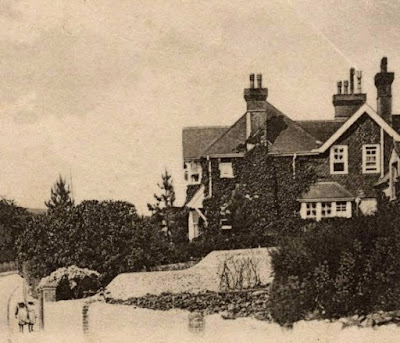 Here's a close-up of that house, across from Warren Hill [above]. We've seen it today in a street view from the front, its southern side [click HERE to view the image]. Let's see if we can espy that same side as above by 'driving' down the side street, Denton Road, via Google Street View and peering behind the foliage to get a peek at the eastern wall. 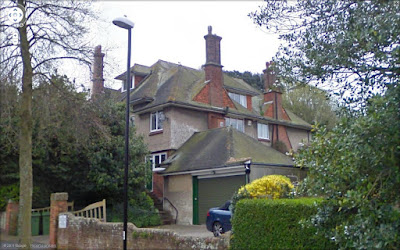 It appears that the same structure is still standing today, with some modifications having been made. If this was, indeed, the master's residence, and the small homes behind it are the "flint cottages" to which the ELHS refers, then it's very possible that the school (and Goodland in 1931) had possession of all of the land across from the school to the north, possibly all the way through to Upper Carlisle Road—some fine acreage!

On the 1930 map we have of the area, there are no structures on either of the two tracts of land below, or east of, the structure discussed above. Arthur Conan Doyle passed away in Sussex in 1930, and if cottages on those parcels are standing today, they must have been standing then. One wonders where the cottages mentioned actually might be. 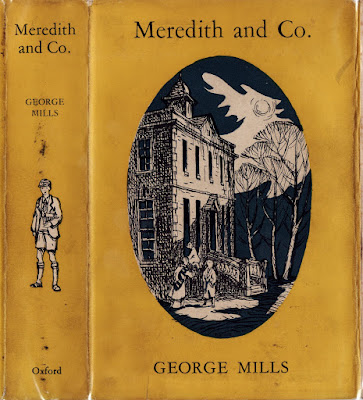 One other bit of evidence for that large edifice having been the residence of the schoolmasters comes from the writing of George Mills.

In Chapter 6 of Meredith and Co. (1933; the dust jacket of the 1950 Oxford University Press edition is depicted below, right), several of the boys sneak out during the wee hours of the night to retrieve a troublesome lost envelope from the desk in the common-room of the master's residence. Here's the text: "Three perfectly noiseless figures crept down the corridor, a big door at the end was slightly unbarred, and the figures walked across the playground towards the master's cottage."

It appears from photographs and the map that the 'playground' at Warren Hill would have been on the west side of the building [far below], in an area between two outlying buildings. If Mills is referring to the landscape of Warren Hill, and not Windlesham House School which was in Portslade at the time, it seems likely the boys left the building from a corridor leading to the playground in the west and probably would have stolen across the quiet street.

The boys then slip into the cottage through a window with a broken latch, as depicted on the cover shown here. After almost being caught by the obnoxious Mr. Lloyd, we find out the master's cottage in Mills's book has two floors. When Lloyd finally shouts for Mr. Gold, another master, we find: "After a few minutes interval Gold appeared at the top of the stairs. He was in a dressing gown and a bad temper."

While we can't necessarily assume Mills wasn't taking artistic license with this schoolboy yarn and conjuring up everything, we find that, after making the boys had made their way into the larder: "Luck was with them. The window yielded to a little persuasion, and two minutes later they were cautiously entering the school building." 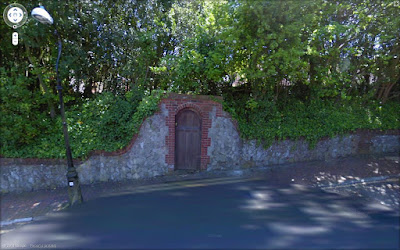 While I'm certain nothing was clocked by a stop-watch, two minutes would seem about right for three frightened boys to scurry from the house across the street, back to Warren Hill, jump the low wall [beside the doorway, above], dart through the foliage, cross the playground, and enter the school.

Of course, we don't know the layout of Windlesham while in Portslade, but the escapade in Mills's book does fit neatly with the geography of Warren Hill.

Except for one thing.

In the page we've examined from an ELHS newsletter (No. 104), we find the troubling, yet very confident sentence [above]: "A house for masters was situated on the other side [of Beachy Hill Road] just below the Denton Road junction." 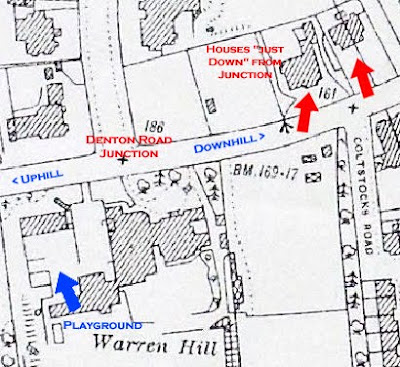 If one of these houses had been, indeed, the house in which the schoolmasters lived, then it may not have been purchased in the same transaction in which the school was, and Goodland's freehold registration may not have encompassed the residence of the masters. It's even possible Goodland owned it as his own home, with master's rooming there while in Meads. Its status as a rental is also a possibility. 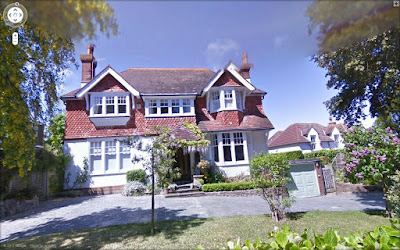 In addition, if either of these two lower houses [seen above and below] was in fact the home of the masters, Mills was clearly envisioning the layout of a different school—perhaps Windlesham—in his 1933 text. 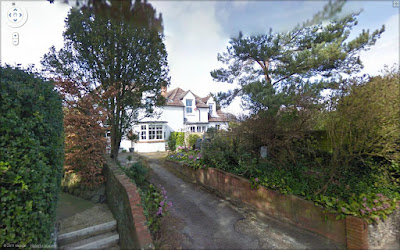