Antarctica , Ceylon, and a Gaggle of de Glanvilles 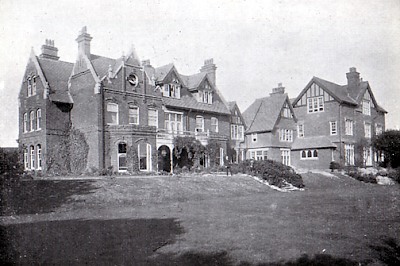 While Bertram George de Glanville, terminal owner of defunct Warren Hill School in Eastbourne, is not intrinsic to the story of George Mills—there's no reason to believe the men ever even met, for example—there is a bit more to know about him, courtesy of resolute researcher extraordinaire and friend of this site, Barry McAleenan.

This is from a recent message from Barry [with my emphases]:


I thought that you would like scans of the press cutting from The Times of Ceylon for January 31st 1925. You will find a reference to Mr and Mrs BG de Glanville in the G's. What I can't explain is how I remembered the name to link it with your recent citation. My great aunt Ursula Pirrie (nee McAleenan) was mother of the bride. Her sister, Evelyn Masters was an aunt to the bride. To further compound the coincidence, is to add that the bride was widowed in 1929 and, having done a runner from Spain at the beginning of the Civil War, was in Eastbourne in early August 1936 [cutting exists]. She could have met up with the de Glanvilles before Bertie went bust ...

May Pirrie's father [Norman] was a first cousin of the Titanic's Lord Pirrie. Allegedly, they were brought up together for a short while. Same generation, but the orphaned Lord Pirrie (born 1847) was 17 years older and working when Norman (the last of 12) was born in 1864, so probably not in the same house.

[Throughout this entry, please find the entire clipping from The Ceylon Times regarding the wedding—click the images to enlarge.]


Barry also directs us to this excerpt from a blog, Turtle Bunbury [again, my emphases]:

The younger sister Kathleen Crawford Ievers (Kitty) married B. de Glanville of the Ceylon Civil Service. I believe this was Bertram George de Glanville, born in 1885 and educated at Taylor’s School, Crosby, and Worcester College in Oxford. [viii] He joined the Ceylon Civil Service as a cadet in 1908 and worked his way up the ladder to the offices of magistrate and district judge… In 1909, he marrried Dorothea Frances Allen (1879-1910), daughter of David Bird Allen of the Bengal Civil Service. Sadly she died the following year… In 1929, the year the Silvermugs succeeded as 3rd Baron Rathdonnell, Bertram became Chairman of the Colombo Port Commission (and was till there when “The Dominions Office and Colonial Office List” was released in 1932). The CPC was established in 1913… to administer the affairs of the Port and to collect customs from passing ships.[ix] They were responsible for developing the harbour, dredging the water and extending the warehouses, quays and waterways in the port. Kitty bore B[ertram] four sons (Ranulph[x], Geoffrey[xi], Robert[xii] and John) and two daughters (Joan[xiii] and Moira Dorothea[xiv]). These were also first cousins of The Baron.


According to a family tree at ancestry.com, Kitty was born in Jaffna, Ceylon (now Sri Lanka) in 1886, although her death certificate provides her birth year as "about 1885."

On 2 July 1928, she steamed into Plymouth from Colombo aboard the S.S. Herefordshire of the Bibby Bros. & Co. Line. She was alone, and her age is given as 42—hence a speculative birth year of 1886. She was traveling alone to "Eastnor, Exmouth," and intended to make England her "Country of Intended Future Permanent Residence."

The family tree also records 29 May 1931 as the date Mrs. de Glanville sailed into London with her children John and Moira, but there is no attached citation to provide evidence. (I have, however, found the manifest and that data is accurate.)

She passed away in Bishop Stortford in Hertfordshire in the late Spring of 1970.

Bertram George de Glanville, her husband and future principal of Warren Hill School, was born in Ashby Passa, Leicestershire, on 1 July 1885. The 1901 and 1911 U.K. censuses recorded him as living at Formby, Lancashire. On the latter date, Bertram was a 16-year-old "scholar" living with his older sister, Louise.

As above, the tree cites that he was educated at [Merchant] Taylor's School in Crosby, and at Worcester College, Oxford, where we already know he was an "Open Mathematical Scholar".

The tree records him joining the Ceylon Civil Service as a cadet in 1908 at the age of 23, followed soon by a marriage to Dorothea Frances Allen at St. Michael's Church in Colombo, Ceylon, on 21 September 1909.

The marriage did not last long, and the family records his residence in 1911 as having been 14 King's Square, Mitchelstown, Cork, Ireland. He was 26 and already a "widower." Dorothea had passed away in December 1910.

[From RootsWeb, Barry notes a relationship to Cork, Ireland, where Bertram had probably gone to mourn Dorothea's passing:

The family tree next lists his promotion to Chairman of the Colombo Port Commission in 1929 at the age of 44.


The 1929 edition of The Dominions Office and Colonial Office List (comprising historical and statistical information respecting the oversea dominions and colonial dependencies of Great Britain) contains the following entry. It has been gleaned through dozens of dubious and often conflicting snippets generated by Google Books, by whom it was read mechanically. I have pieced it together as accurately as possible. Make of it what you will:

Kathleen Crawford Ievers was de Glanville's second wife, but no date of that marriage is evident anywhere that I can find. Named children of the couple, however, are listed in his on-line family tree as:

Robert de Glanville (1918 – 1942; born in Ceylon, he lived in Sussex at the onset of WWII, was commissioned as a 2nd Lieutenant, posted to the Middle east, and was killed in action on 2 June near Bir Harmat leaving behind a wife he had married in 1940; his body was never recovered)

Moira Dorothea de Glanville (1921 – 1975; she arrived from Colombo on the S.S. Chesire in 1931 with her twin brother, John, her mother, and her maternal Grandmother, Cathleen Y. Ievers, aged 78, on their way to "Dr. Glanville, Eastnor, Essex"; she later lived in Sussex and married in 1945; she passed away in Epping Forest, Essex, as Mrs. Moira Dorthea Wait, age 53).

There are three other children, each listed only as "Living de Glanville," although that may or may not be fact. But it is possible that Randulph, John, and Joan may, indeed, be alive.


Here are some additional tidbits gleaned from a reference section of Turtle Bunbury:

[ix] The Port of Colombo [left] has existed for many centuries but, due to its vulnerability to the South Western monsoons, was superseded by the Port of Galle as a landing place for passenger ships during the 19th century. In 1874 Governor William Gregory initiated work on the SouthWest breakwater for which he received a knighthood. This major development led to the shift of traffic from Galle to Colombo. The evolution of Colombo as the business centre of Ceylon commenced thereafter and all imports and exports came through the Colombo harbour. The commercial and mercantile sector grew within the Fort of Colombo. The Macan Markar jewellery business, established in Galle in 1860 shifted to Colombo in the early 1870s. From : "The Port of Colombo 1860- 1939", Dr K. Dharmasena (an economist). Published in 1980 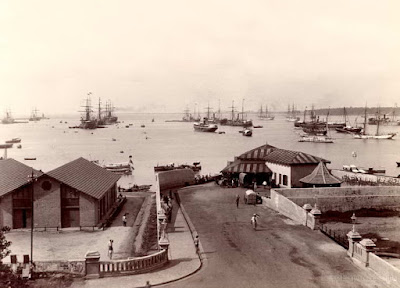 
One last word from Barry:

I'd swapped emails with Lynne Nelson [compiler of the RootsWeb info above] notionally because she mentions Emily Creagh [my grandmother's maiden surname] in her de Glanville listing and I'd been at university with a Tim de Glanville who had links with Ceylon, though I can't claim to have known him very well…

The local family history society have talks occasionally at one of the local schools. One such was by Peter Bailey [of Families in British India Society, including Ceylon, Burma etc; FIBIS.org]. Of the 700,000 names on their database, the 15, including 'de Glanville' [that I looked for] failed to get a single hit except for one - but that was for Johnson! 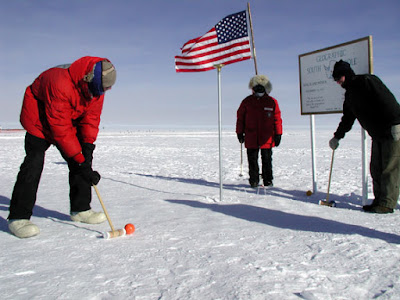 As time passes, I become more keenly aware of how small a planet we really do live upon. In researching George Mills and his life and times, I've been transported vicariously, via one character or another in this saga, to every continent on Earth, save one.

If someone could link this research to Antarctica, I would be most grateful. I even now can envision the aging-but-athletic Agnes & Violet Mills, clad in tweed-and-Gore-Tex® parkas and mukluks, having wielded their mallets amid penguins during the big Geographic South Pole Croquet Tournament, while George sat inside their Quonset hut, out of the stinging polar breezes, sipping a hot cup of tea, and working the Times crossword…

Just kidding. Thanks again for everything!