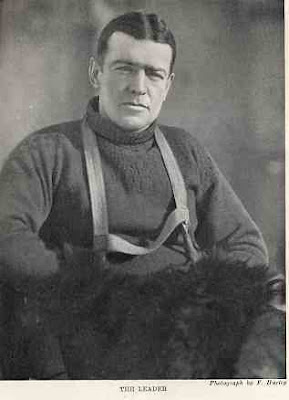 Sometimes, while working on this George Mills project, I wonder what actually gets read and what doesn't. Do my hits from Uzbekistan or Benin really mean anything? Probably not. Still, who knows? I just click "Publish," and whatever I've written whirls out into the world via broadband, and I often never know what comes of it.

But sometimes a reaction from a reader arrives, and it's simply… Brilliant!

Just a few hours after I posted my tongue-in-cheek request for information that might tie my research to Antarctica, I received this anonymous message:


Of course, I was completely unaware of Shackleton's Eastbourne connection. And what a timely response! 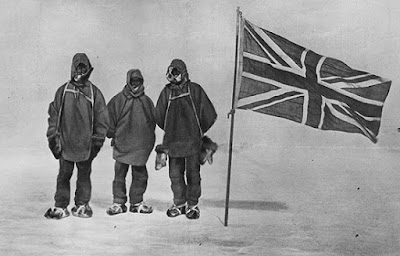 (Born , Feb. 15, 1874, Kilkea, County Kildare, Ireland—died Jan. 5, 1922, Grytviken, South Georgia) British explorer. In 1901 he joined Robert Falcon Scott's expedition to the Antarctic. He returned to Antarctica in 1908 and led a sledging party to within 97 mi (156 km) of the pole. In 1914 he led the British Trans-Antarctic Expedition, which planned to cross Antarctica via the South Pole. His expedition ship Endurance was caught in pack ice and drifted for 10 months before being crushed. Shackleton and his crew drifted on ice floes for another five months until they reached Elephant Island. He and five others sailed 800 mi (1,300 km) to South Georgia Island to get help, then he led four relief expeditions to rescue his men. Shackleton died on South Georgia at the outset of another Antarctic expedition.


Regarding his residence in Eastbourne, here's information from a site entitled Low-Latitude Antarctic Gazetteer Database Index.

House No 11 — The Eastbourne house. 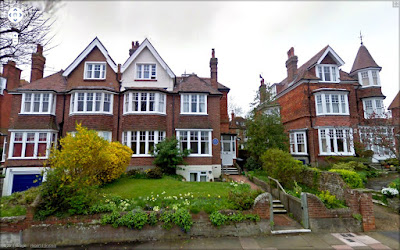 In later years the Shackletons, certainly Emily and the children, seemed to be living at Eastbourne on the Sussex coast. Sir Ernest was there between April and December, 1919, from June to December 1920 and April to August, 1921 (according to James and Margery Fisher's Shackleton).

My visit of 1/30/98: The house is located perhaps a mile west (I believe) from the center of Eastbourne. It is in a very interesting section of the town called The Meads and only a block or two from the seafront.

I also visited the house with Jonathan Shackleton on 1 November 2007, and had tea with the current residents. (The house was reconfigured into four flats about 20 years before.)

When information on the Eastbourne house appeared as a 'Low-Latitude episode," Judith Faulkner in Surrey wrote to say that she had visited the Eastbourne house in June 1994 and that it had, shortly thereafter, been honored by a ceramic blue plaque placed on the ground floor facade by the Eastbourne Civic Society and the Eastbourne Borough Council. The accompanying newspaper cutting (East Sussex Eastbourne Evening Argus) notes that Shackleton lived at 14 Milnthorpe Road "...for the last five years of his life before he died in 1922." The unveiling, on the 23rd of November 1994, was overseen by Shackleton's granddaughter, Alexandra Bergel. The photographs accompanying Ms Faulkner's letter show a 2-1/2 story semi-detached brick house on a tree-lined street.

Emily lived on at this address for sometime after Shackleton's death. Her correspondence with Hugh Robert Mill while the latter was writing his Life of Sir Ernest Shackleton (1923) is from this address.


This additional information was found on a site called China Rhyming: 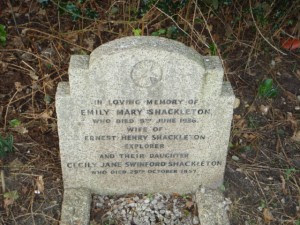 A rather weird but potentially interesting deviation this weekend. While back visiting the UK a few weeks ago I happened to be exploring villages around West Sussex. One, Coldwaltham, is an interesting little place – picturesque. Wandering around I happened to notice that the local churchyard, St Giles, contains the grave of the wife of Sir Ernest Shackleton, the Antarctic explorer. Shackleton’s daughter, Cicely, is also buried there.

Shackleton himself died while exploring and was buried in South Georgia in the South Atlantic in 1922 (how and why he was not shipped home for burial is apparently the subject of some controversy) while Emily, at home in Coldwaltham, died in 1936.


Google Maps shows that Shackleton's home at 14 Milnethorpe Road was a mere 1200 feet away from Warren Hill School, as the idiomatic crow flies, and it's highly unlikely that the boys were unaware of that the great polar explorer was so near. He must have been their hero, and quite a 'real' one at that! 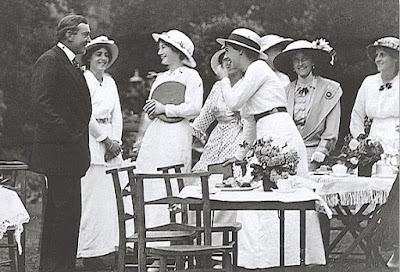 Also, given sometime Head Master Joshua Goodland's standing as a Fellow in the Royal Geographical Society and lifelong love of travel and adventure, he at the very least is likely to have heard Shackleton speak in Kensington or elsewhere. For all we know, it may have been Shackleton's residence in Eastbourne that eventually drew Goodland to seek a place there as well!

It seems that Shackleton's celebrity would have made him a popular guest at local parties, and his charm is apparent in the accompanying photograph.

Anyway, many thanks to "Keith's mum" for linking Antarctica to my research here!