Looking at the Life of J. Goodland, Part 1

We know from our examination of the post-WWII croquet playing of the Mills siblings—George, Agnes, and Violet—that studying the Mills often introduces us to interesting characters who help us better understand George and Co.

One such person we've discussed recently and wondered about often is "J. Goodland," to whom George's 1933 Meredith and Co.: The Story of a Modern Preparatory School is dedicated.

Joshua Goodland [left] was "a some time Head Master" of Warren Hill School on Beachy Head Road in Meads, and we were recently introduced to photographs of Goodland, one-time business partner F.R. Ebden, and some others.

Goodland obviously was admired by Mills, but further research shows the Head Master to have been the sort of man Mills couldn't have helped but to respond to and admire.

Goodland was born sometime in July 1873 in Exeter, Devon, to Gillmore Goodland, a "certificated" elementary school teacher at a school in Exeter. The elder Goodland hailed from Bristol, Gloucestershire, and lived with his wife Frances at 39 Exeter Road at the taking of the 1881 census.

Joshua, seven years of age, was the second of four Goodland sons at the time, with a daughter, Grace, having been born in the middle of them. The family lived with two boarders, one of whom was a teacher at Gillmore's school, and the census counted a domestic servant and a nurse—Joshua's as yet unnamed youngest brother apparently had just been born!

As we reach the time for the 1891 census, we then find the Goodlands living in Exmouth at 5 Parade in Withycombe Raleigh. Joshua, then 17, is listed as a "school teacher's assistant."

Goodland drops from the grid until 1901 when he is recorded as a Trinity Hall student at Cambridge who was "Throwing the Polo Ball" at an athletic event (Joshua finished third) in Volume 23 of the Cambridge Review, and also as the visitor to the home of a building contractor who lived at 24 Hawthordew in Bristol. Goodland's occupation is recorded as "architect." He was 24 at the time.

Five years later, the record shows that Goodland had become a Fellow of the Royal Geograhic Society on 7 May 1906 meeting of the Royal Geographical Society at which he heard delivered a paper, From Victoria Nyanza to Kilimanjaro, by Captain G.E. Smith of the Royal Engineers. This snippet from volume 27 of The Geographical Journal [left] attests to Goodland's interest in travel.

In 1908, we find Goodland doing something about that interest. On 1 January 1908, Joshua crossed from St. John's, New Brunswick, Canada into the United States at St. Albans, Vermont, having sailed in on a ship of the Allan Line. He lists his address as "Mrs. Gillmore Goodland, Gresham House, London, England," and claimed to be a "tourist" with a destination of San Francisco, California. Using his mother's address at 24 Holborn Viaduct, near Blackfriars Bridge, would seem to indicate that, despite his age (35-ish), Joshua had yet to put down any roots.

Goodland was travelling with his friend Peter Wallace, an Australian attending Cambridge, as well as a university mate we've met before, Vyvyan Holland, the son of playwright Oscar Wilde. Holland later wrote a line in his 1954 autobiography, Son of Oscar Wilde, "Another month passed, and then one day Joshua Goodland came to see me and told me that he and Peter Wallace, with whom I had traveled to Russia and Sweden, were going to Canada on a shooting expedition in the north of Quebec." Presumably, the trip to Canada documented in the paragraph above was to Quebec. We also know that Goodland already had made a trip through northern and eastern Europe. 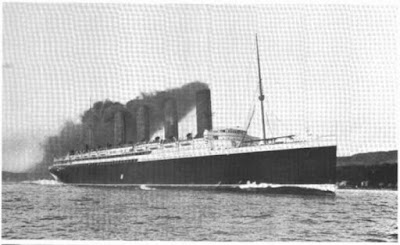 Then, on 13 May 1908, Joshua sailed into Seattle, Washington on the S.S. Minnesota, having traveled from Yokohama, Japan on 1 May. He then listed his home as "Inshaw House, London" (now apparently an artists' studio), and his occupation as "lawyer," not architect. He was 5' 9" tall, with a ruddy complexion, in good health, and was "passing through."

The record at this point is unclear how he came to arrive in Japan, but we know where he was bound from Seattle.

At the age of 34 and still travelling with Wallace, Goodland sailed out of New York City on the famed Lusitania [above, right] and into Liverpool, England, arriving on 11 August 1908.

Having left England sometime in 1907, Goodland and Wallace (with Holland along for some of the trip) had taken what amounted to a whirlwind trip around the world. When a 34-year-old bachelor takes the trip of a lifetime with his university pals, something big must have been in the wind.

On 19 June 1909, Goodland, aged 35, married Florence Annie Holdsworth in Middlesex. He is described as a bachelor "Barrister-at-Law," and she as the 24-year-old spinster daughter of the late William Holdsworth, Doctor of Medicine. It is likely that the younger woman that we see in the recent photographs from Warren Hill School were images of Florence Goodland.

The next documented event in the life of Joshua Goodland is a manifest showing Goodland arriving in Brisbane, Australia, on 27 October 1909—just in time for Spring!—after sailing out of Colombo, Brazil, on a ship called the Oroya. The young couple's honeymoon? Probably, although I can find no record of Florence being aboard any ship until 1938!

Actually, there are no records showing the couple traveling to South America, or anywhere else, by ship, or returning home—at least not until 1938. But, they must have returned.

It was apparently time for Goodland and wife to settle down and leave his life as a student at Cambridge behind, and in 1912 what could have proved that better than being tagged by the telephone company. Joshua was listed as having a number in the Holborn exchange, 4571, with an address at 9 King's Bench Walk, Temple, just off the Thames (near his mother's address, also close to Blackfriars Bridge), east-southeast of the Royal Courts of Justice and the Chancery. Interestingly, the listing above Joshua's was for his older brother, Gillmore Goodland, then a Consulting Engineer at 17 Gracechurch Street, about a mile to the east of Joshua. As you can see [right], you could ring Gillmore at London Wall 1969.

We find Goodland, according to the Law Reports, Chancery Division, volume 2, 1912, working in the court in the Court of Appeal and serving as junior counsel in a case (behind Cambridge's Mr. William Otto Adolph Julius Danckwerts, KC, highly-paid counsel (left) to Commissioners of Works and Public Buildings, and whose office was at 11 King's Bench Walk, Temple) involving the Metropolitan Water Board.

According to volume 29 of Reports of Patent, Design, Trade Mark, and Other Cases (Patent Office, 1912), he also summed up the plaintiff's argument in a copyright infringement case that year. 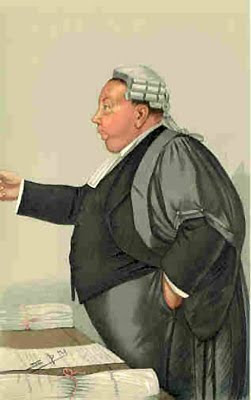 We lose track of Goodland and his career until he crops up in 1915 as a minor shareholder in the Standard Woodwork Manufacturing Co., Ltd. (The Electrical Review, vol. 76, 1915).

Then in 1918, he worked on an appeal in the House of Lords between the Water Board, appellants, and Dick, Kerr, & Co., respondents, regarding the construction of a £670,000 waterworks reservoir.

This case was lead by learned counsel P.O. Lawrence, KC, and assisted by junior counsel Goodland and Gregory Holman, KC (according to British Ruling Cases from the Courts of Great Britain, Canada, Ireland, &c., volume 8, 1919).

These seem to be very high profile cases, involving some heavyweights of litigation. Finding Goodland's address next to the prolific Danckwerts, who was rumoured to have earned in excess of £20,000 per annum at the time, speaks volumes about how quickly this long-time world traveler and some time architect became fairly prominent in the legal profession in London.

Next time we'll come back and find Goodland at new address, and, before long, in a new profession. See you then…