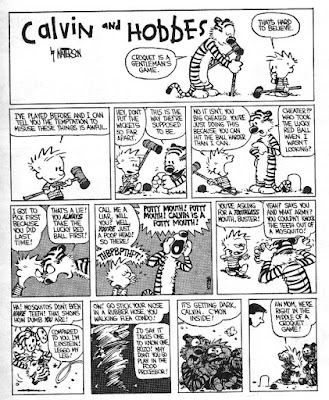 Today I'd like to make some adjustments to previous posts about the croquet playing careers of George, Agnes, and Violet Mills. This would not have been even remotely possible without the effort of Chris Williams, an archivist for The Croquet Association. I've needed much help because my real experience of the game of croquet is extremely similar to the comic at left, and I did in fact lose a tooth to my brother (circa 1963) in an imbroglio that was finally broken up by my irritated father, who'd been awakened from a well-deserved weekend nap by the din!

Almost a month ago, I finally posted information that I'd been pursuing, compiling, and disaggregating since last summer regarding the Mills and their participation in tournaments throughout England. Thanks to Mr. Williams, I am now able to rectify my mistakes, inadequacies, and misguided assumptions.

First, regarding the handicaps of the Mills siblings over time, I was in error. Here are the actual facts:

It may be relevant to recall that Mr. Williams noted that "most lower handicaps were increased by 2 at the start of the season" in 1958.

I had also tallied up tournament wins for the Mills siblings, and I couldn't have been farther off base. The Croquet Association's database shows the following 1st place finishes for them:

George was the last sibling to win a tournament, and it is fitting that the final prize came in his beloved Eastbourne. Meads, of course, is a large part of the fictionalized setting for two of George's most popular children's books, Meredith and Co. and King Willow.

It turns out that I was far from correct in yet another way. The archive search engine at The Times had turned up only 4 Final Rounds in which one of the Mills had finished as champion, one by George and three by Agnes. It turns out that the siblings actually racked up no less than 32 official 1st Place Prizes in 19 seasons, ranging from 1948 to 1966. And that doesn't even begin to account for 2nd and 3rd place prizes—certainly an amazing amount of success by the youngest three of the four children of Rev. Barton R. V. Mills!

It also makes me wonder about that search engine at The Times. While I was entering into Excel the literally hundreds of data that I spent hour upon hour, week after week, painstakingly wringing from their archives, I often wondered what percent of the whole was going to end up with? Half? A third? A quarter? I thought I'd never know.

Based on the number of final round wins that unreliable engine produced for me, it turns out the number I'd gleaned was exactly one-eighth, just 12.5%. 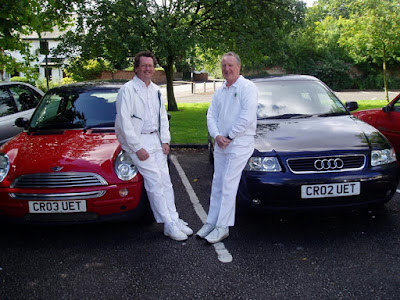 Now you easily can see why I am so exceptionally thankful for the assistance of Chris Williams and Ken Cooper of Bowdon Croquet Club for helping me—in the course of just two weeks or so, rather than many months—sift through what turns out to have been such a massive amount of data and players. They've done most of the metaphorical heavy-lifting in dealing with a task far more daunting than I'd ever imagined. Missing out on seven-eighths, or 77.5%, of the possible croquet data simply would have been a shame. Missing almost 78% of anyone's finest moments would be a genuine pity. The accomplishments of the Mills family on the croquet lawns of the era may not have been elite at the time, but it certainly was a level of success that deserved to be lauded and appreciated exactly for what it was: Remarkable.

Thank you again, gentlemen, for helping me sort through the Mills croquet years. And thank you once again to everyone who has taken time to offer assistance. In the last few days I've received even more messages from people with offers of help, new information, and even more vintage photographs.

I'll be sharing it all very soon. Stay tuned…