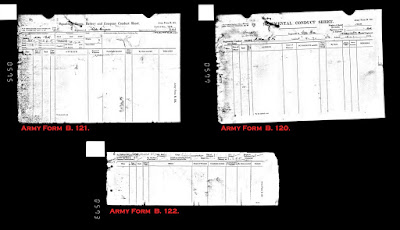 We are taking a break from our examination of the retirement years of George Mills, much of which was spent with his sisters, Agnes and Violet, at Grey Friars in Budleigh Salterton, as well as on croquet lawns all around south and central England.

Today, we'll stay with our look into the military files of George during the First World War, from 1916 – 1919. Last time, we found that the youthful Mills was having difficulty making any sort of lasting mark in the service, having been compulsorily transferred out of the Army Pay Corps while serving as a 'fatigue man.'

Before we examine what happened to George Mills after his departure from the APC, it may be fair to take a look at some other records in his file. It is distinctly possible that Mills may have been dismissed from the Pay Corps due to misconduct, and that he may have drunk, brawled, or even 'thieved' his way out the proverbial door.

One glance at his conduct record, seen above on Army Forms B. 120., B. 121., and B. 122. [above, left; click to enlarge] are all quite obviously free from any taint. In fact, after having been filled out upon his beginning to serve the Colours, the only amendments occur when he was transferred and subsequently assigned new serial numbers.

These documents clearly show that Mills engaged in no detrimental conduct—there is not even an entry in the blank requiring the date of his "last drunk"—and he received no punishments. 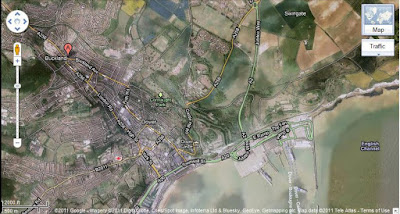 These pristine and extremely wide, open spaces also provide evidence of something else: During his entire tenure during the Great War, Mills never received what Army Form B. 121. refers to in whole as: "Good conduct badges, service pay, or proficiency pay."

Mills certainly has no black marks on his record. In fact, Mills apparently made no mark in any way, positive or negative. No bad conduct. No conduct. Not a single thing.

His transfer out of the Army Pay Corps must simply have been based on competency—or lack thereof—and we do know that officers during his tenure in the APC at Buckland, Dover [right], did not see much potential in a certain Pte. G. R. Mills.

Would things be different when he reached the Army Service Corps?