Devonshire Park: Then and Now

I have to admit that it is with some relief that we have finally finished examining the WWI army file of George Mills [see the post below]. It was a windfall and answered many questions we had about George, but, as always with new information, it seemed to raise as many new questions as it answered.

My new goal: A glimpse into his WWII army file!

Meanwhile, reviewing and researching all of those documents put something of interest on the back burner, and I'd like to share it today.

Regarding our many discussions of players found in a group photograph of the competitors in a 1957 croquet tournament at Devonshire Park, the redoubtable Barry McAleenan forwarded a photograph of the park as it looks today [above; click to enlarge].

On 4 March, Barry wrote: "Here's a recent panorama of a much re-developed Devonshire Park. You should be able to see the turrets. Taken with a Fuji FS1500 "bridge" camera which splices 3 overlapping snaps together and relies on minimising the seam to get a result—but is not easy to use and sometimes lets itself down if the images have extreme perspectives or are distorted by lens curvature."

My, it does appear to have been re-developed! If I'm not mistaken, the 1957 photo from the website of the Bowdon Croquet Club would have been taken somewhere along the left hand side of the near court in what is now the park's "International Lawn Tennis Centre."

I've cropped the turrets Barry mentions out of each photograph and juxtaposed them [at left], providing a reference point for use when comparing the two images. 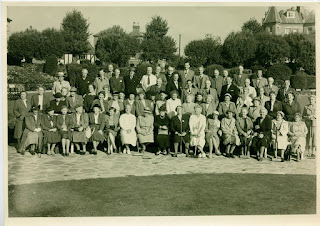 It's amazing how much has changed since 1957 at Devonshire Park [right], the year before my birth, but I see it when I return to my hometown of Broomall, Pennsylvania. It seems the city of Philadelphia creeps closer each year, threatening to overrun what once was a lovely little town in the distant suburbs.

Such is the passage of time, however. The old age that crept closer to my parents each year finally overtook them and now has me in its inexorable grip as well.

And on that sombre note, I think I will dodder on out of the porch here on this glorious morning and get some chores done while I am young enough to be able to walk, climb a ladder, and feed myself…