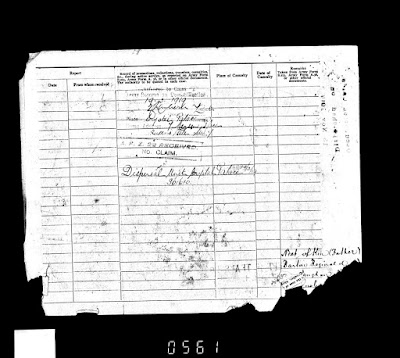 Our final peek into the World War I army record of Pte. George Ramsay Acland Mills concludes here. We know that Mills was demobilised to the No. 1 Dispersal Unit at the Crystal Palace on 19 February 1919 and presumably was welcomed into the loving bosom of his family. Shown, left, it is actually the back side of a document we've already examined: Army Form B. 103., CASUALTY FORM—ACTIVE SERVICE. Here we clearly see the documentation of the demobilisation of our protagonist.

We don't know who might have met George at Sydenham Hill, or if he made his way home in some other way—Perhaps taxi? By rail?—to his waiting family in Kensington. With one son, Arthur, already having been wounded by the trenches of France and then returned to the Colours to serve once again in Palestine and China, it must have been a joy to Rev. Barton R. V. Mills (who served during the conflict as an Army chaplain) and wife Edith to know that their son, George, was relatively safe in England—although there were air raid drills at the APC in Dover—and now coming home for good. 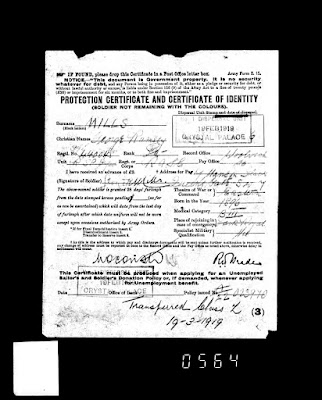 It was "The War to End All Wars," after all.

Upon his dispersal, George was issued Army Form Z. 11. [right], his PROTECTION CERTIFICATE AND CERTIFICATE OF IDENTITY (SOLDIER NOT REMAINING WITH THE COLOURS). While the information about Mills at the top of this form is what we already know [Except for the line: "Specialist Military Qualification} Nil."], a key phrase stands out: "The above named soldier is granted 28 days' furlough from the date stamped hereon pending [19 FEB 1919] (as far as can be ascertained) which will date from the last day of furlough after which date uniform will not be worn except upon occasions authorized by Army Orders."

It goes on to state in bold-faced print below: "This certificate must be produced when applying for an Unemployed Sailor's and Soldier's Donation Policy, or, if demanded, whenever applying for Unemployment benefit."

So, this document proved Mills was a soldier on furlough until 19 March 1919, and after could be used to apply for unemployment benefits. He needed to hang on to this form. Got it!

It is recorded on the above documents that he was, indeed, "Transferred [to] Class Z [on] 19 – 3 – 1919." George finally became a civilian once again almost 92 years ago to the day. That's a happy ending to a not-always-so-happy tale, is it not?

Or is it the end? 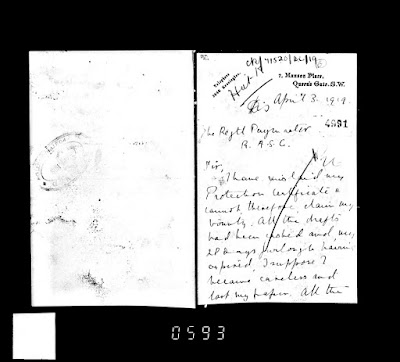 The actual final document in the file of George Mills is a handwritten message, written on stationery imprinted with his grandfather's address and telephone number (3545 Kensington, if you're interested).

Seen to the left and below, right [click to enlarge], it reads:

I have mislaid my Protection Certificate & cannot, therefore, gain my bounty. All the drafts had been cashed and my 28 days furlough having expired, I suppose I became careless and lost my paper. All the other documents issued to me at my demobilization are safe. Could you tell me if I can obtain another certificate?

I was discharged on the 19th of February this year from the Reserve Supply Personnel Depot at Hastings.

I should be very much obliged to you if you could help me in any way. If, in the meantime, my Protection Certificate turns up I will at once communicate with you.

I am, sir
Yours faithfully,

An inked rubber stamp tells us that this missive was received at the paymaster's post room at Woolwich Common on 7 April 1919. We have no way of knowing if Mills eventually found his Army Form Z. 11., or if it a duplicate was sent to him. It does appear that the copy here in his file is the primary carbon duplicate transcribed on the date of his demobilization. 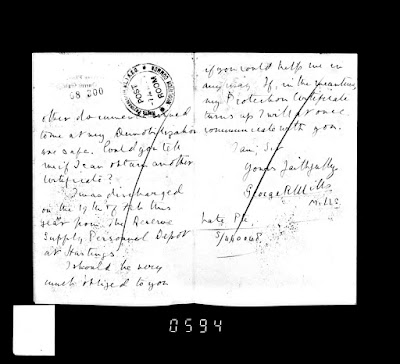 By "bounty," Mills must have meant what an on-line source at the WWI website The Long, Long Trail refers to as "additional payments due to him [that] were sent in three installments by Money Orders or Postal Drafts. These could be cashed at a Post Office on production of the Protection Certificate." Terry Reeves at Great War Forum adds: "The serviceman was issued with a Protection Certificate for the period of his leave and a rail warrant. An out-of-work donation policy was also issued, which was effective for 12 months after his demobilization. The benefit was 24 shillings pw for men over 18 with allowances for those with children; women received 20 shillings. This rate was later increased to 29 shillings and 25 shillings respectively."

George also may have wanted the certificate so he could apply for unemployment benefits. Such a need wouldn't last long, however. We already know that Mills then "matriculated from Christ Church on 16 October 1919 [my emphasis]," and by a decree of 9 March 1920, "he was exempted from taking Responsions (preliminary examinations for entry) and the examinations of the First Public Examination," allowing George to enter Oxford, according to their archives.

Anabel Peacock, an archivist at Oxford continues: "This decree stipulated that until the end of Trinity Term 1923 any member of the University who had been engaged in military service for twelve months or more before his matriculation, was permitted to offer himself for examination in any Final Honours School, despite not having met the statutory conditions for admission to that School. This was on condition that he had obtained permission from the Vice Chancellor and the proctors; that he had entered upon the third term and had not exceeded the twelfth term following his matriculation; and that he had paid the fee for admission to the examinations the decree excused him from."

With a well-respected father and grandfather who'd graduated Oxon, it's easy to imagine that all must have been a veritable 'slam dunk' for young George. He easily cleared those hurdles and did pay his fees of £5—2s on 21 May 1921. 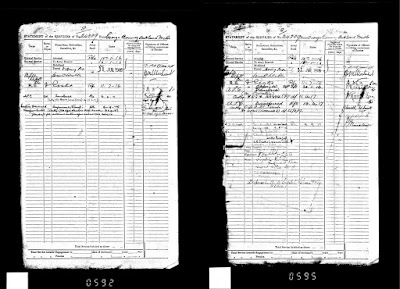 George was off to college in 1919 after last having attended classes in 1912 at Harrow. That is, unless you count his stint in the classrooms at S.C.T.C. Fovant at the School of Instruction, where he learned shorthand theory and typewriting—the latter being quite a useful skill for a man who'd eventually become a novelist.

And looking back on the clearly lacklustre military career (thus far) of George Mills, Pte., S/440048, doesn't it seem fitting that the army's newly-minted but almost immediately demobilised clerk did what many of his officers along the way [His various assignments are seen on his Statement of the Services forms, both of which are seen, either left or right] probably would have expected him to do?

He lost a critical piece of the paperwork he was handed on his way out the door of the Crystal Palace on 19 February 1919.

Although there is certainly a warm place in my heart, full of admiration, for George Mills, this final document in his WWI record seems almost fitting: He was a failed clerk who was even forced to admit he couldn't locate a very important military document after becoming a civilian again. I'm sure no one in the Army Pay Corps would have been surprised in the least.