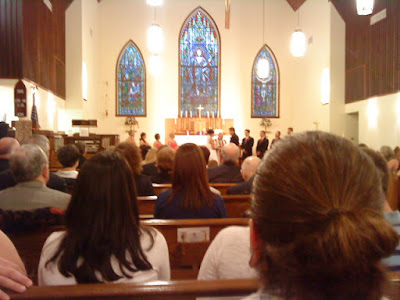 Today, I'll be spending time cleaning up the living quarters around here. Yesterday was filled with a wedding celebration for a colleague [left], but now I am facing visits from my daughters this week. One is a Zoo Studies major on spring break from college and the other is a junior forensic analyst at a firm in Philadelphia. I'd like them to arrive, as my mother would have so delicately said, without the place looking like a tornado swept through it!

As much as I'd like to put off this bout of spring cleaning longer, I'll go today with something quick: A message found recently in the Who Is George Mills? mailbag in response to an earlier post. It's from Martin of Mollie's Loft Books:

Harry - I'm the owner of Mollie's Loft Books, with the copy of Minor and Major.

I think that you've made a leap too far in assuming that this book was published in 1962. It has a presentation label dated 1962, but that just shows that the book was already in existence at that date. There is, unfortunately, not the slightest sign of any date of publication anywhere, though at the bottom of the verso of the title page there is "T 563" which may or may not mean "March 1956". Sorry that I can't help more. My DJ, incidentally, is rather better than the one on your site - if you want a scan, please tell me. 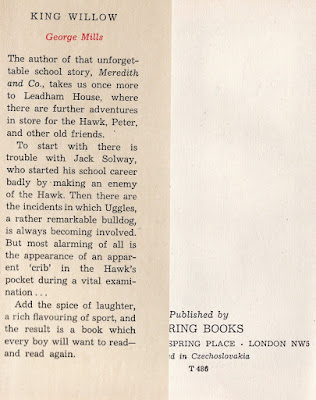 Just to review, it appears that the three prep school books of George Mills (Meredith and Co., King Willow, and Minor and Major) were re-released in the 1950s or early 1960s based on the updated haircuts and style of artwork as compared to earlier editions.

George's titles, according to informed opinion, appear to have been the precursors of the Jennings books by Anthony Buckeridge. Mills, however, never published a children's book after the whimsical Minor and Major in 1939, and lost his foothold as the originator of the genre. I have read on-line speculation that the three titles by Mills were released for the purpose of "cashing in on" the popularity of the Jennings series.

In my same edition of Minor and Major, there is "T 563" printed beneath the publisher's information. Specualtion above indicates a publication date of March 1956.

In the reissue of King Willow, also by Spring Books, there is printed: "T 486" [pictured, right, with identifying fly leaf] Might that indicate publication in June of 1948?

I should note that both above editions are of exactly the same dimensions, and are described as being part of the "Fanfare Series" by Spring Books."

Meredith and Co., however, is a Dakers publication, although from the same address. On-line searches don't turn up much, but Dakers and Spring Books both appear to have published books in 1954 according to volume 168 of The Publisher in 1985. Is it probable that they were simply two branches of the same company?

My Dakers edition of Meredith has a handwritten gift inscription dated "Xmas 1957," and no similar configuration of letter and numerals as found in the other two Mills books. Otherwise, the overall design of the Dakers edition is identical in format except for its dimensions, it being exactly 1¼ inches taller and ⅜ of an inch wider.

My hunch is that the "563" and "486" do not appear to be dates, unless these editions were published eight years apart, which is possible—King Willow is listed as part of the Fanfare series on the dust jacket of Minor and Major, but not vice versa, probably indicating King Willow was, indeed, published first.

I simply can't think of a reason, however, that after purchasing the rights to Mills's work, there would be an eight year delay between publications unless Spring Books actually reissued these titles multiple times throughout the 1940s and '50s—and there is simply no reason for us to believe that was the case.

And despite the fact that the well cared for edition of Minor and Major at Mollie's Loft has a presentation label dated 1962 that is apparently relatively meaningless in determining the publication date of a book, it still seems logically more probable than less so that the presentation label of the book would have been written closer to the publication date rather than farther from it.

I'm still willing to state that these titles by Mills are far more likely to date from 1957 and after, even into the 1960s, rather than back into the 1940s.

Either way, there appears to have been a rekindled interest in the prep school titles of George Mills sometime during the postwar era. They remain excellent "reads" today, if you haven't already enjoyed them, and Mollie's Loft might be a good place to start if you're hunting for the fine literary efforts of George Mills!