1918: DISPOSAL OF SOLDIER PASSING THROUGH THE TRANSFER CENTRE. 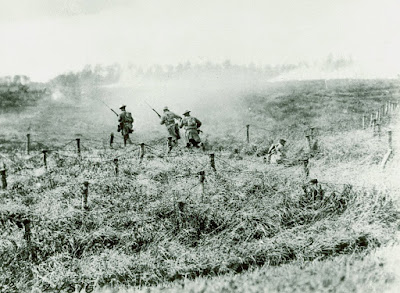 Late summer, 1918. The turning point in the First World War. The Battle of Amiens opened a string of Allied successes that is now known as the Hundred Day Offensive, a massive attack initially coordinated by Gen. Henry Rawlinson of the British Fourth Army integrating the use of tanks, aeroplanes, and artillery in support of a suddenly highly-mobile infantry and cavalry, ushering military tactics out of the trenches and into a modern age of warfare.

Rawlinson's powerful strike on August 8, 1918, had been cloaked in secrecy, and its aftermath led to the nervous breakdown of German General Erich Ludendorff, the 15 October mustard gassing of a bitter young German soldier named Adolf Hitler, and the signing of the 11 November Armistice. 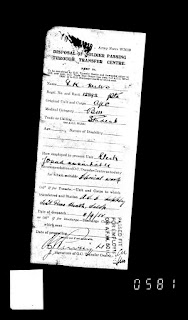 Rawlinson's desire for secrecy in the days leading up to the Battle of Amiens even manifested itself in this unusual way: The British Army's Army Pay Corps had pasted a message into the latest pay books of their troops ordering them, if captured during the offensive, to give only their name, serial number and rank, the message concluding with the words: "Keep your mouths shut." Word of Rawlinson's new stratagem could not be permitted to leak.

While I am uncertain whether those pasted messages were inserted into pay books in Great Britain or abroad, at more advanced pay headquarters on the continent closer to the front, we do know that in August 1918, George Mills was a serving the war effort as a clerk in the APC back in England.

What exactly his duties may have been at the time is unknown, but carrying the rank of Rifleman, or Private, to the APC may not have endowed him at first with responsibilities far greater than care of those glue pots.

Mills had been transferred out of the Rifle Brigade and into the APC on 16 April 1917. By 9 September 1918—almost a month to the day after what Ludendorff had called the "the black day of the German Army," Mills was unceremoniously and involuntarily transferred out of the Army Pay Corps [above, right; click to enlarge images]. 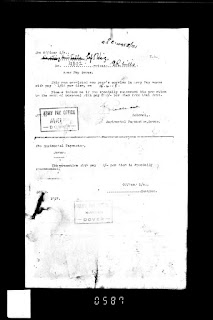 Army Form W5010 is entitled DISPOSAL OF SOLDIER PASSING THROUGH THE TRANSFER CENTRE. Mills is listed with his requisite details: "G. R. Mills, 12892 Pte., APC, BIII, Student," but the telling phrase here seems to be "disposal of soldier."

The next entry says: "Recommendation of OC. Transfer Centre as to duty for which suitable clerical work ."

Mills apparently arrived at the Transfer Centre and had this form stamped on 10 September 1918. The document is also stamped PASSED FIT FOR EMPLOYMENT ON A.F.W. 5010. The next handwritten entry is: "Unit and Corps to which transferred and Station ASC Supply List Prees Heath, Salop ."

After some 17 months on the job in the Army Pay Corps, Mills not only hadn't earned a promotion, but was compulsorily forced out. On 13 April 1918, the Regimental Paymaster in Dover sent a message [at left] to the "Officer 1c." in charge of Mills asking if he might, after a full year in the APC, "specially recommend" George for "promotion to the rank of Lance Corporal with pay @ 2/— per diem from that date." (A raise from what we know was his 1/8 pay rate.) 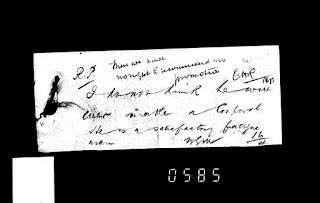 The next day that form was returned to Dover without ever having been filled out, along with this handwritten note [right]: "R.P./ I do not think he will ever make a corporal. He is a satisfactory fatigue man." The Regimental Paymaster subsequently jotted: "Then we have no right to recommend his promotion."

Another document, this one handwritten in what appears to be pencil on scrap paper, is dated 15 June 1918. Presumably this one is also about George Mills, and it reads:

"Sir/ This man is not in this section now. He is on fatigue with Harbinson the messenger, was one time in Lan…s section. Is not much use I fancy." 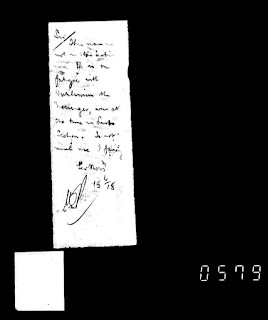 The signature of the author of the message and the receiving officer are not legible to me, but can be seen in the image at left.

While I'm not 100% sure what the term 'fatigue man' meant in the British Army circa 1918, it hasn't been a position of honor on the United States military. A WWII veteran, Bill Oneby of Wisconsin was drafted into the army out of high school in 1943 and said in an interview: "I was a fatigue man. It was a sort of holding pattern for some recruits while the military decided where they should serve."

One does get the feeling that despite being 22 years old in 1918 and having received something of a Harrow education, as well as already having served as an unpaid Lance Corporal in the Rifle Brigade (a promotion that certainly did not last), the army still didn't know what exactly to do with George Mills.

It must have been somewhat disheartening for George to realize that after two years in the army, Mills was ostensibly still just the 'fatigue man' sidekick of the company messenger in the APC. 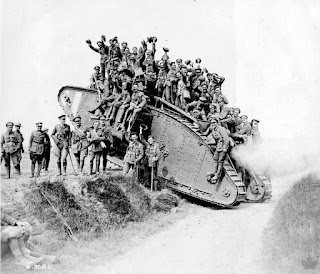 On 27 September 1918, British war correspondent Philip Gibbs wrote of the aftermath of that decisive Battle of Amiens: "On our side the army seems to be buoyed up with the enormous hope of getting on with this business quickly" and that German soldiers on the Western Front "no longer have even a dim hope of victory on this western front. All they hope for now is to defend themselves long enough to gain peace by negotiation."

While the British, Australians, Canadians [pictured, right], French, and Americans pursued the retreating Germans, Mills was being trained for clerical work outside of the APC, where he definitely had not been held in great esteem.

Failed APC clerk George eventually would end up in the Army Service Corps in Prees Heath, Shropshire, and acquire some new skills that would serve him well through the Armistice and well beyond. We'll take a look at all of that sometime soon!