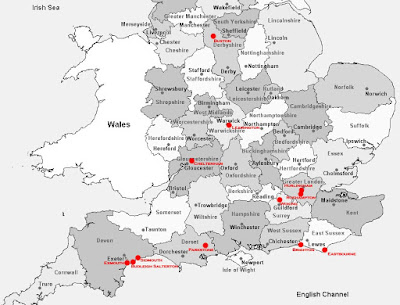 [Click to enlarge]
Here's yet another necessary update of incomplete information in a previous post of mine. Below, find the specific tournaments one or more of the Mills siblings are documented as having played from 1948, when the Misses Mills moved to Budleigh Salterton, through 1971 when George apparently took ill:

It should be noted that, short of more extensive digging, this table is now as complete as I reasonably can make it. It contains specific tournaments in which the Mills had played that I found while trolling the archives of The Times, as well as competitions after which they had placed 1st, 2nd, or 3rd on a Prize List [Many thanks to Chris Williams of The Croquet Association for the complete information]. This table may, however, not include tournaments in which one or more of the Mills played and didn't take a prize, or that simply didn't crop up in months of searching the Byzantine archives of The Times.

While the above data might not be the completely comprehensive, it does give a far better sense of both the length and the breadth of the croquet careers, as well as the depth of real commitment, of George, Violet, and Agnes Mills of Grey Friars, Budleigh Salterton.