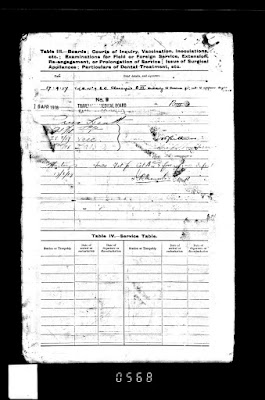 Tucked away in the WWI file of Pte. George Ramsay Acland Mills, we find yet another medical document, in this case referred to as a table. This item is burdened with the cumbersome title: Table III.—Boards; Courts of Inquiry, Vaccination, Inoculations, etc.; Examinations for Field or Foreign Service, Extension, Re-engagement, or Prolongation of Service; Issues of Surgical Appliances; Particulars of Dental Treatment, etc.

9 September 1918, as we know, is the date on which Mills was compulsorily transferred out of the Army Pay Corps.

Those entries are bracketed to the right, accompanied by the notation "BIII" and stamped with a floral asterisk, then signed below by a captain with an indistinguishable surname. It is all accompanied by a carefully penned word [pictured, right] that appears for the life of me to be "faithness," with a flourish preceding the initial "f." It could also read, I suppose: "NO faithness," if that is not a flourish.

(If anyone has any idea as to the meaning of that word, or if I haven't identified it correctly, I would welcome your assistance!)

Arriving with George at Prees Heath on 9 September would have been yet another bit of paperwork, Army Form B. 278. This form, entitled LIST OF TRANSFER DOCUMENTS, would have catalogued all other documents that the OC Eastern Command Transfer Centre would have expected to receive along with the warm body of Mills. 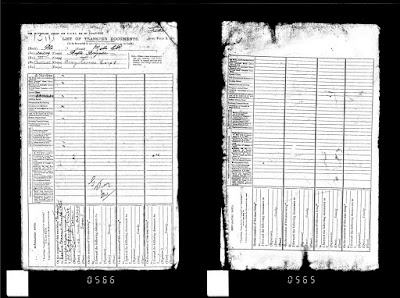 We've actually examined all of these forms at this point except one: Army Form W 3068, which was added in handwriting to the above form. This form is simply not in Mills file. Army Form B 122, however, has been copied (front and back) twice within the file. It is unclear if AFW 3068 was missed during that duplication error, or if 3068 was simply misplaced and lost.

Doing some research, mention of AFW 3068 was found in an on-line obituary for a British soldier named Frank Bourne, a driver for the Army Service Corps' 800th Horse Transport Company, who died of influenza on 5 October 1918. Here's an excerpt:

"He joined the Army Service Corps and became T/4/143126. After enlisting Frank's war was at home as he wasn't posted for nearly a year. On the 29th February 1916 he was transferred from the Essex Regt depot at Warley and went to Woolwich. Army Form 3068 shows that he left with two pairs of boots, one cap, two drawers, 2 jackets, one pair of puttees, two pairs of trousers, one cardigan, and one drab greatcoat, but was not issued with a cap badge or razor."

It would probably not be of great interest to anyone except a git like me, but I'd have liked a look at that form—although why I'd need to know he had a pair of puttees or a cardigan tucked away, I don't know! 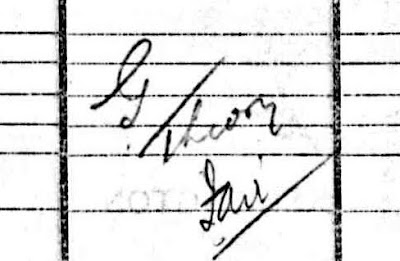 The only other notation on this List of Transfer Documents are the following items, written in script, and stacked one atop the other: "G/ Theory/ Fair." It doesn't seem to be located in a particular place as much as it appears to have been a quickly dashed notation in an empty space.

I have a hunch what that note regards, but I'll save that for another time. After all, George has just arrived in Prees Heath, and we have more discover regarding his transfer to the Army Service Corps.

Incidentally, Dr. H. R. Hansell was apparently a civilian doctor who did the final medical examination on George Mills in Hastings upon demobilization and George's release from service.

One can read a bit about Hansell on-line at Google Books by entering the search phrase "Dr. H. R. Hansell," including the particulars a malpractice suit for the misuse of Röntgen rays in diagnosing a woman's fractured thigh and her subsequent radiation burns. (35 minutes under an x-ray machine might have been a bit excessive, but all agreed that was normal.) He also was an accomplished soloist, having belted out "masterly renditions" of Non è Ver and Queen of the Earth at a "lengthy and well-varies musical programme" at the Queen's Hotel in Hastings on 10 February 1910 (at least according to The Dickensian).

Isn't the internet an amazing invention for those of us who love trivial and virtually pointless information? Imagine how wealthy I might be if I put this kind of research effort into, say, investing in the stock market!

Anyway, for more about George Mills and his brief stay in Shropshire before demobilisation in 1919, stay tuned…