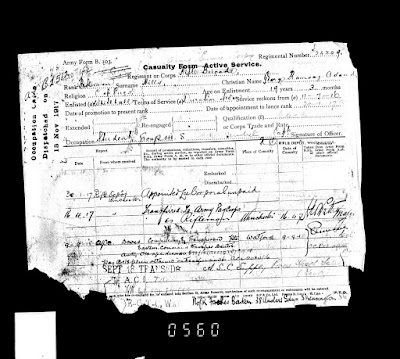 The next document we'll look at from the First World War military record of George Mills will be Army Form B. 103., his "CASUALTY FORM—ACTIVE SERVICE" [left]. One might (and by "one," I quite definitely mean me) expect this sheet to be completely empty, save for some routine, fill-in-the-blank identification information at the very top. One (or at least I) would have expected it because we know from last time that Mills was never wounded, or even otherwise injured, during his stint with the army between 1916 and 1919.

Anyway, let's see what this form does reveal, first examining the minutiae at the top. Mills has been qualified here as a "clerk." "Qualification (b)" is undated, but is written by the same hand that struck his "Rifle Brigade" regimental assignment above and altered it to read "Army Service Corps." It doesn't seem to be much a leap to assume that his clerk qualification and assignment to the A.S.C. were temporally close, if not simultaneous. They seem, indeed, to have been recorded here simultaneously.

Of some interest is that, for the only place in this file, Mills was required to list his religious affiliation, and it reads: "C. of Engd." We know his father, Rev. Barton R. V. Mills, converted from Church of England to Roman Catholicism sometime in the early 1870s (the diocese are, for some reason, reticent to check the exact date for us) at Christ Church, Oxford. The senior Mills (listed on this document as George's next-of-kin) became and continued to be, however, a practicing cleric in the Church of England until his passing in 1932.

Here we see Mills affiliating himself with the denomination of his father's vocation, and not his father's actual faith, in 1916. We know that George's funeral services were held at the St. Peter's Catholic Church in Budleigh Salterton, indicating that his own religious affiliation also became Roman Catholic sometime after WWI, likely after 1932, a time when George's affiliation with Catholicism could no longer be an embarrassment to Barton's ongoing employment under the auspices of the Anglican Church.

George's occupation is listed here as "Student, Group HI. S." In the United States, that would seem to mean "High School," likely indicating completion of a secondary curriculum. What it meant in 1916 in England, however, I've been unable to ascertain beyond discovering that Britain's secondary schools occasionally have been referred to as "high schools."

Mills attended Harrow from 1910 through 1912, as we know. Could this indicate that it would have been "Harrow School" that was referred to as "HI. S." even though the second letter seems to have been emphasized as a capitalized "i"? Or does it indicate that Harrow, at least to the army, was a "high school"? I am uncertain, but it does seem to have been important to document his education exactly, even if cursorily.

In other locations we learn that George's "Service reckons from 11 – 7 – 16," and his "Date of appointment to Lance Rank" was "30 – 1 – 17." We've seen that he had enlisted on 15 January 1916, and had been 'appointed' to the Rifle Depot by the Central London Recruiting Depot in Whitehall on 11 July 1916. Reckoning his service from 7 November 1916 (presumably for "boot camp," as we call it in the States) Mills, in less than 90 days of reckoned service, had earned a promotion to Lance Corporal.

Apparently, Mills was off to a relatively fine start in the military – at least until his transfer to the A.P.C. Let's take a look at the three bits of information below the 'blank,' in the body of the document, recorded over time from early 1917, well into 1918.

Here at Who Is George Mills? We have an semi-official Information Officer and Handwriting Analyst, the redoubtable Barry McAleenan, who weighs in with this observation: "A Lance Corporal, L/Cpl has one stripe: a V chevron; a corporal has 2 stripes; a sergeant, 3. The V is not inverted as for a US-type chevron."

Barry continues: "A rifleman is equivalent to a private (entry level) – abbreviated as Pte or P/E in these documents." 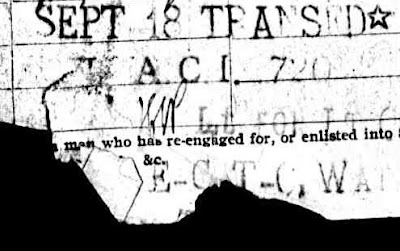 Great info! We now know that, although it appears that Mills was invested with at least a modicum of additional responsibility (although unpaid for it!), he did not carry his stripe along with him to the A.P.C. Exactly why he did not retain his appointment as Lance Corporal upon transfer and why he was never paid as such, as well as why he voluntarily transferred in the first place, is left to the imagination at this point.

The final entry on this page, which includes a small amount of information, illegible to me, that records the regulations under which Mills was transferred. I will any record illegible writing using an ellipsis (…): 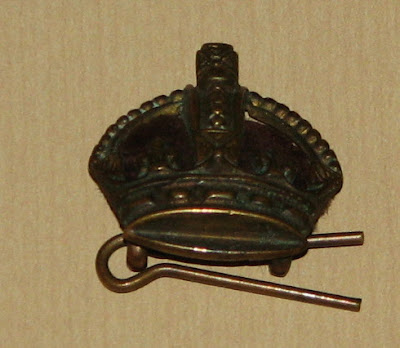 Thanks, Barry, who also enlightened me to the fact that Salop = Shropshire.

As you can see, a portion of the bottom of the page has been damaged, but not enough to eradicate any documentation.

We have no idea how Mills rate of pay had been adjusted during his tenure in the service through 9 September 1918, if at all. Nonetheless, we can see that his transfer out of the Army Pay Corps [and lost the collar badge you see, right] in September of 1918 was not of his own choosing—interesting considering that in 1939, Mills would return directly to the APC, newly dubbed the Royal Army Pay Corps, as a 2nd Lieutenant Paymaster.

This multi-purpose page, ostensibly a form simply the date and place of a soldier's casualties also doubles as a as a record of transfers, a promotions, the retraction of that promotions, and even pay rates. There are other documents associated with the transfer of George Mills out of the Army Pay Corps, however, and we'll examine some of them next time!