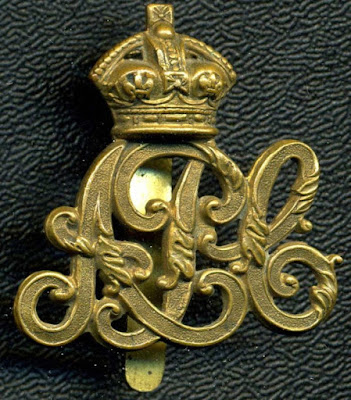 It may be instructive at this point to examine what sort of an operation the Army Pay Corps was during the tenure of George Mills from 11 April 1917, when he transferred into Dover (presumably voluntarily), to his permanent and compulsory transfer out on 9 September 1918.

John Black published a paper entitled War, women and accounting: Female staff in the UK Army Pay Department offices, 1914-1920 in the Accounting History Review, Volume 16, Issue 2, July 2006 , on pages 195 – 218. Its abstract describes the situation in which members of the APC found themselves at the onset of hostilities during the First World War:

"The role of the APD [Army Pay Department] offices was to manage the pay and allowances of soldiers of the British Army, using the 'Dover' system of military finance and accounting which had been introduced in 1905 along with the command structure of the Army Finance Branch. The flexible 'Dover' system coped with the unprecedented increase in bureaucracy as the strength of the army rose from 140,000 in 1914 to over 5 million by 1918." 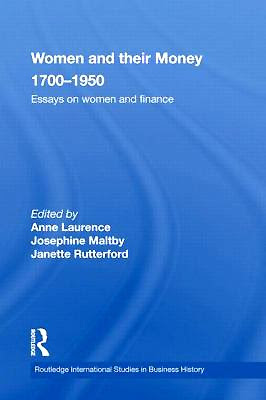 A valuable 2008 book, Women and Their Money 1700-1950: Essays on Women and Finance, edited by Anne Laurence, Josephine Maltby, and Janette Rutterford, features Black's detailed essay describing the operation of the APD and APC during the First World War, with their emphasis being on the women staffers. At one point, by some estimates, 28,000 women were employed in the department and corps.

One interesting part of the history of army payrolls is that apparently the system previously had been retrenched and reformed, leaving the APD and the APC in a state of temporary abandonment from 1904 to 1910. Black writes: "The onset of total war [in 1914] resulted in the urgent need for industrial as well as military expansion and mobilization… [and] for enormous administrative and clerical support, as the immediate bureaucratic expansion of the financial system of the Army caused a near-meltdown of the existing system."

The need for assistance resulted in women being recruited as unofficial volunteers to help at the Army Pay Office at Woolwich between August and the end of October 1914. The War Office, however, didn't approve and ordered their removal.

Ironically, just one week later, in November 1914, women were officially recruited for work in the War Office Finance Branch, working on "matters involving separation allowances and the disposal of the effects of soldiers who were battle casualties."

Black continues: "From January 1915 the War Office began to officially recruit clerks on a temporary basis for employment in all APD establishments, including the army pay offices… From 1915 onwards, there were increasing numbers of women clerks employed within APD establishments in the UK measured against the decline of male clerks from 1915 to 1920." 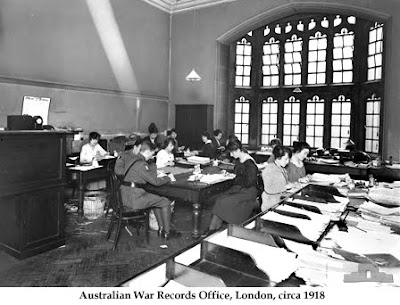 What we see here is that the Army Pay Corps, overwhelmed at the opening of hostilities and in need of clerical help, likely took advantage of as many BIII classified soldiers as possible. George Mills was probably a somewhat hot commodity, even in 1917, coming over from the Rifle Brigade where he'd served as an unpaid Lance Corporal. Even if Mills had left that brigade due to any sort of deficiency, physical or otherwise, we can see that an extra pair of hands would have been considered a boon to the suddenly burgeoning and understaffed APC.

The author also points out that expansion of the army's pay services spiraled because the "notion that the war begun in 1914 would be a short one, over by Christmas, had evaporated in November 1914," and the services suddenly needed to rethink what was necessary to meet such increased and prolonged demand. New technologies were introduced to pay offices that wouldn't find their way into other sections of the military until after the war. 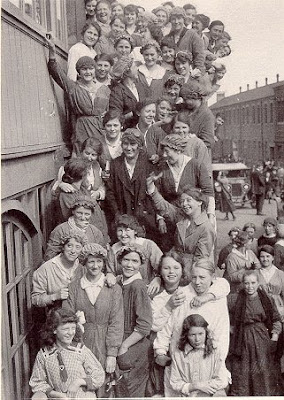 Not only had loose-leaf mechanics replaced leather-bound ledgers, but stencil duplicators were also in common use, as well as "Qwerty" keyboard typewriters. Evidence of the use of all of these modernisms can easily be found in the WWI records of George Mills. The author also asserts that there is ample evidence the "Burroughs adding machines and other labour-saving devices were also being used at this time."

Black goes on to suggest that there was a "shallow learning curve" associated with the daily APC routine, and that "women and girls whose previous employment may have been as machine operatives and other unskilled factory work took on the role as compiler clerks within the army pay offices very quickly."

The payroll office in Nottingham in 1916 did research that "tends to demonstrate that the transfer of mechanical skills from blue collar to white blouse was quick and effective both in training and performance."

Not everyone was in agreement, however. A contemporary document, the Griffiths Committee Report, related the fact that up to 70% of clerical work in offices was being done by female labour, "much of it an inferior and inexperienced type… The majority of the remainder being men unfit for combatant service and many of them hardly fit for strenuous office work."

While this report certainly knocks the women working for the APC, it is certainly not the least bit flattering to the men in those offices, either. George Mills was likely not alone in being seen as a relatively useless cog in a increasingly complex paperwork-generating machine that was desperately in need of skilled assistance. In 1916, for example, the Army Pay Office dealt with "660,000 accounts, while 25,000 postal communications postal communication are received each day," many of which required follow up investigations. That overwhelming workload would have steadily increased as the war dragged on into 1917 and 1918. 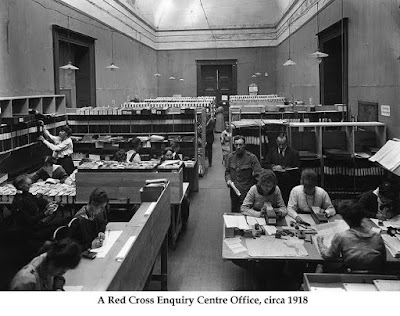 One must keep in mind that Black has pointed out that the APD and APC were at the vanguard ushering in office technologies that most would have found uncommon at the time, especially in the UK. He offers the following quote: "In the United States [at the time] office mechanisation was driven in large part by an ideology of systematic management; this ideology did not make it to Britain until after World War 1."

Finding enough capable workers to operate in fast-paced, increasingly modern offices full of the latest technology—yes, even the clacking typewriter was still 'modern technology' at that time—must have been a yeoman task. A man like George Mills, schooled at Harrow and sequestered in the The Grove, a house "strong in Art and Drama, and increasingly in Music, with a longer reputation for sporting prowess," was unlikely by education or by breeding—George was great-grandson of the Aclands of Killerton, grandson of rich and powerful Arthur Mills, MP, and son of well-to-do cleric and biblical scholar, the Rev. Barton R. V. Mills—to have had even the most remote clerical skills to allow him to keep pace with his distinctly plebeian office mates.

The patience shown by harried superiors is unlikely to have been much, and his situation must constantly have been tenuous at best. I will offer this olive branch of understanding to Mills regarding reverse-sexism that must have bitten him often at the time: Officers watching civilian women of that "inferior and inexperienced type" outperforming him, with his 30-inch chest and upper-crust upbringing, on a daily basis for an entire year must have, indeed, made him seem, by comparison, like one of the biggest failures in khaki. 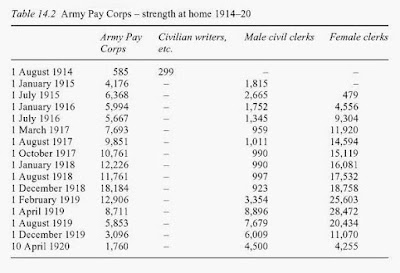 And there were certainly enough women around to outshine him continually. In March 1917, a month before George Mills transferred into the APC, its overall military manpower was 7,693. That was augmented by 959 male civil clerks and a whopping 11,920 female civil clerks.

In August 1918, just before Mills was unceremoniously shown the door, the totals stood at 11,761 APC military staff, 997 male civil clerks, and a stunning 17,532 female civil clerks in the employ of the Pay Corps.

Between August 1918 and December 1918, the staff of the APC ballooned from that 11,761 figure above to 18,184—an influx of 6,423 actual soldiers in just four months—to reach its high water mark of wartime military staff.

However, at least one soldier was being transferred in the opposite direction, and involuntarily at that: Pte. G. R. Mills, APC 12892.

In a branch of the military so obviously starved for labour, it must have been quite an indictment of Rifleman George Mills to have been described, as we've seen, as a "fatigue man" who wouldn't "ever make corporal" and was simply "not much use." 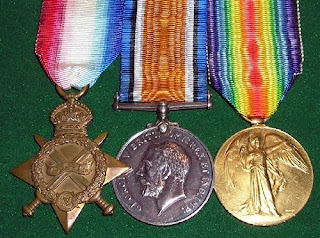 To have been summarily and permanently sent on his merry way must have been a crushing blow to young and sensitive George, whose Uncle Dudley Mills was a highly respected captain in the Royal Engineers, and whose elder half-brother, Arthur Frederick Hobart Mills, was a recent war hero who had been wounded in France and awarded the 1914 Star, the British War Medal, and the Inter-Allied Victory Medal [left].

This is not to imply that George's family would have been ashamed of him in any way. Still, he would have to have been utterly oblivious or the owner of a certifiably bullet-proof self-esteem not to have felt injured to some degree by the way circumstances had played out for him.

George Mills—Army Form W5010 in hand and on his way to the O.C. Transfer Centre in September of 1918—would need to reinvent himself, both as a soldier in what was left of the Great War and as a potential member of the workforce when peace finally arrived.

How much of the responsibility he must have borne himself, perhaps out of laziness or even an initial feeling of disrespected privilege, is open to conjecture. It seems clear, though, that the slight, polite, and possibly even timid (at least by comparison with other recruits) Mills was quite unprepared in a great many ways for his military duties.

Next time we'll examine in more depth some of the medical reasons Mills had been classified physically as a BIII, including some issues that certainly couldn't have helped matters at all.