Examining George Mills in the Great War and My Own Expectations 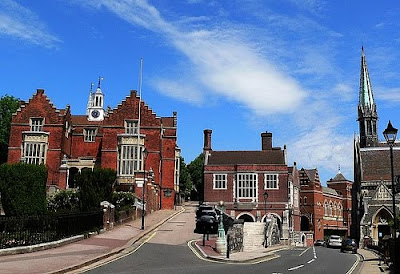 Yesterday, I was feeling quite pleased with myself for having linked aspects of the life of George Mills (specifically his penchant for drama) to his time spent at Harrow living at The Grove. I was also fairly well pleased with myself for extending George's use of the address of the Military and Naval Club as his own from 1944 to at least 1951.

I'd certainly exceeded the original expectations I'd had for Michael P.'s message, forwarded from Rita Boswell of the Harrow Archives. And in my excitement to explore those research avenues above, I neglected to read three little letters very carefully: A.P.C.

Last year, we'd heard from Harrow Information Officer Luke Meadows, who enlightened us then on the military career of George Mills in the First World War: "We know that he was in the Rifle Brigade and then transferred to the Royal Army Service Corps (R.A.S.C.) during the First World War between 1916-1919."

Here's the key excerpt from Ms. Boswell's newer message from Harrow [above, left] this week: "He served in the Great War from 1916-1919 as a Corporal in the Rifle Brigade but transferred to A.P.C. and then the R.A.S.C."

I have to admit, it wasn't until I was writing yesterday's posting that those three little letters—the acronym A.P.C.—jumped out at me. And they not only are a key addition to our knowledge of the life and career of George Mills, they helped open a torrent of new knowledge about George, as well as providing fuel for a wealth of new questions!

The A.P.C., or Army Pay Corps as it was known in the Great War (WWI), later became the R.A.P.C.—the Royal Army Pay Corps, in which George served as a Lieutenant from 1940-1943 before relinquishing his commission due to "ill-health." 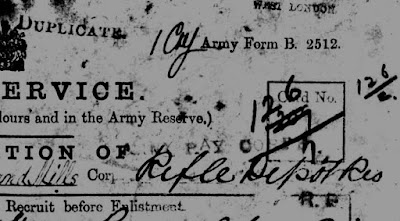 We had a fleeting glimpse of what appeared to be the words " …MY PAY CORPS" on the duplicate copy of George's recruitment form [right], presumably accidentally affixed via carbon copy. Harrow's archives do, indeed, confirm a stint having been done by George Mills in the Army Pay Corps during the First World War.

In the last 24 hours, this information has led to the discovery of some 40 documents contained in George's military file from 1916 to 1919 outlining his transfers and his physical condition (initially B III, later C III), confirming that he never went overseas during the war, and, most interestingly, describing his departure from the Army Pay Corps—where he returned as an officer in the next World War—as an involuntary transfer to the Royal Army Service Corps at Prees Heath, Shropshire.

I'm still sorting through the compendium of information about George Mills, 1916-1919, and it may reveal much about the man that could go a long way toward explaining his subsequent life and trials. I'm still uncertain about the exact circumstances that link his unceremonious dismissal from the A.P.C. as a clerk and a private to his triumphant return as an officer and paymaster in the R.A.P.C. over 20 years later (Mills, it turns out had never officially been promoted to lance corporal).

And, once again, I'd like to offer my deepest gratitude to both Michael P. of the Eastbourne Local History Association and Ms. Boswell of the Harrow Archives for their kind assistance. One never knows when the smallest bit of information will lead to enormously significant discoveries. Hence, the reason I always need to keep an open mind about my own expectations!