October in Devonshire Park, Eastbourne, circa 1957 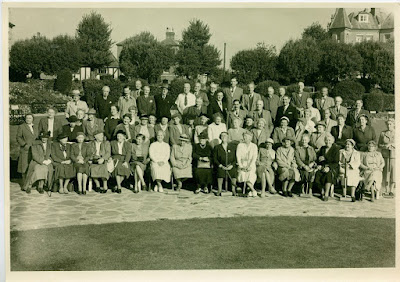 As promised, let's take a closer look at the unexpected and delightful photographs found in the Photo Archives of the Bowdon Croquet Club. While there are many interesting images, two of them are pertinent to our objectives here at Who Is George Mills?

The first is a group photograph [left; click to enlarge] that, according to the website, was "probably" taken at Devonshire Park in Eastbourne during the "Southern Championships." If that event is synonymous with the "South of England Championship," it was held in October of 1957. A tournament at Roehampton had been held through the 30th of September, involving some of the same players. 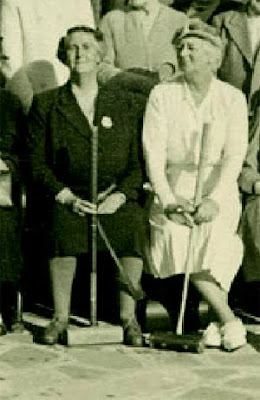 Initial searches for croquet results for the Mills family at that October 1957 tournament turned up only one incidence: Agnes Mills played twice in partnership with Mrs. G. D. Perowne, beating the duo of Mrs. E. Reeve & Mrs. H. L. Roberts in the 2nd round, but falling to Lt.-Col. G. E. Cave & Miss E. J. Warwick in the Semi-Final of Handicap Doubles.

After attempting over a dozen more searches to try to produce additional results from the matches at Eastbourne that October, I finally hit another set of useful results [using, oddly, 'penny croquet' as my search terms], the matches played on 8 October. Among them, we find that Agnes Mills and Mrs. Perowne were victorious over Lt.-Cmdr. G. W. Style and the familiar Mrs. H. F. Chittenden (+6) that day.

Those unusual search terms also allowed me to discover that Agnes lost in the opening round of the Level Singles, when she fell to Miss M. Postford (-11). Another player we've discussed, Mrs. Alex Fotiadi of the Bowdon Croquet Club, also fell to Mrs. G. F. H. Elvey in the first round of the Open Championship, (+11, -4, -7) on the same day. 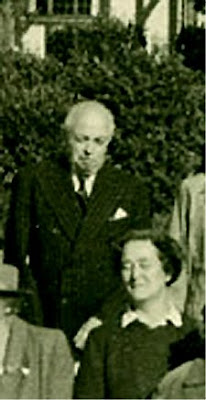 Let's, however, take a look at exactly who is in this photograph.

Fewer than half of the players have been identified, but some who have been are key to our research here.

In what appears to be the 2nd-to-last row, we find Amy's husband, Maurice Reckitt, whom we also met yesterday, standing 5th from the right. We've seen him before.

However, in the last row, 2nd from the left, we get our first look at an image of Major John Roland Abbey, the famed book collector [pictured above, left, in a pin-striped suit]. He's above his wife, the smiling Lady Ursula Abbey, who sits in the 1st row, 6th from the left, with her legs crossed. 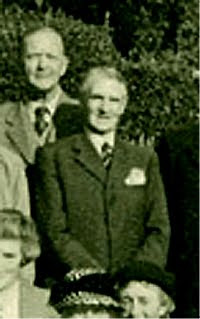 Of greater interest, though is the woman standing just in front of Major Abbey, just to his left, our right. She unfortunately closed her eyes in the bright sun for just a moment and was captured that way. That woman is Miss Violet E. Mills, sister of George and Agnes, and quite probably the best athlete of the three [also pictured above, left].

Speaking of him, we find our George Mills himself standing in the back, 5th from the left, standing with his hands clasped in front of him [pictured, right]. It's difficult to tell if George is sporting the same dashing moustache as we've seen in the image of him taken at Ladycross School in 1956. I've been in contact with the webmaster of Bowdon Croquet Club (In fact, I've been a pest to him) and if a higher resolution image becomes available, I may be able to examine it sometime later this spring.

If there's any question as to whether the locale of the photo is Devonshire Park, the redoubtable Barry McAleenan weighs in with this information: "I can even prove the location of the photo—see the attached and, looking towards Devonshire Park, notice the view of that particular turret . [There are also others in Blackwater Road which forms a T with Spencer road.] My great aunts lived in the nearest Victorian house. The anachronistic house to the left was

a replacement for one damaged by a bomb in 1943. The bomb fell directly on the local Surface Air Raid Shelter, killing 16 people inside and 17 nearby... [and] one of the local Croquet courts at the Saffrons was also bomb damaged at this sort of time." [You can see the modern color photograph to which Barry refers, left; click to enlarge] 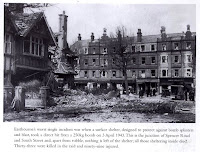 Barry also was kind enough to send along a photograph of Spencer Road ["looking the other way"] containing a reference to the actual 1943 tragedy [right; click to enlarge]. It creates a stark contrast to the smiling faces and serene surroundings of the Bowden photograph. Everyone in that image, however, experienced the Second World War in a deeply personal way that I, sitting here in the United States in 2011, cannot even begin to fathom. One can get some sense from films like the wonderful The King's Speech, but that's just the merest of glimpse of the onset of years of relentless struggle. 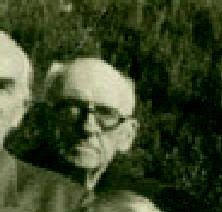 Barry, you'll recall, attended Ladycross Prep in 1956 when George Mills spent the summer there. He also identifies the gentleman wearing glasses and standing in the last row [left], below the flagpole, 7th from the right: "E.A. 'Tony' Roper was the former (till 1954) headmaster of Ladycross."

We've often wondered how George Mills, ostensibly settled in at Grey Friars in Budleigh Salterton, managed to connect with Ladycross School in Seaford, Sussex, for at least that one teaching assignment. We know Mills taught at Ladycross because George was one of the schoolmasters there when Barry himself attended the school, remembering Mills as having been there for the summer of 1956. Mr. Tony Roper is obviously an extremely likely connection.

As well as the image of the entire roster of competitors at Devonshire Park, there is a second image posted on the Bowdon website. It's a closer photograph [seen centered, below; click to enlarge], giving us a far better look at the players on the right hand side of the risers.

If you can be of any help identifying players in these photographs, please contact the Bowdon Croquet Club's webmaster at mailto:info@bowdoncroquet.co.uk And, of course, please let me know, too! 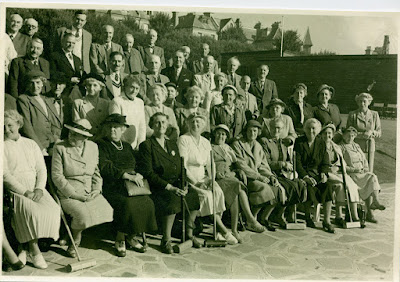