From The Grove to Budleigh, via Picadilly Place 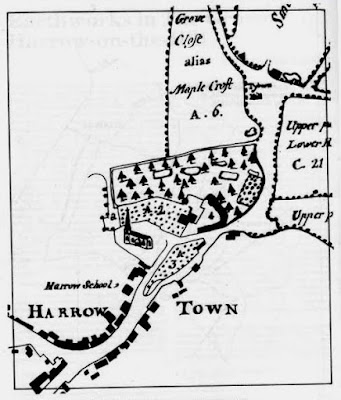 Today, it is time to hit the rewind button—I almost said "on the tape," even though that now sounds, in a DVD/DVR world, like saying that I donned "spats" and my "fob"—and travel back in time for a while. We'll leave behind the coastal croquet lawns of Budleigh, Parkstone, and The Saffrons and turn the compass northward as well. Our destination? London, much earlier in the 20th century, where we'll try to find young George Mills, the teenager!

This note arrived yesterday from Michael P. of the Eastbourne Local History Association:

"Having noticed that GM was educated at Harrow, I told Rita Boswell, the archivist there, of your website and asked whether she had more info on him. Below is her response:

I have checked our school paper and photograph collection for George Mills but both have drawn a blank so far. We are having the paper digitised at the moment which will enable a better search in due course. It is also possible that a photo will turn up in due course, so I will keep looking. Meanwhile, all I can tell you is what appears in the School Register. That is: 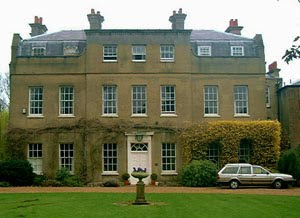 George Ramsay Acland Mills, son of the Rev. B. R. V. Mills (Old Harrovian) of 38 Onslow Gardens S W London. George entered Harrow in September 1910 and left in the summer of 1912; while here he resided in a small boarding house and another house called The Grove [pictured, right]. He served in the Great War from 1916-1919 as a Corporal in the Rifle Brigade but transferred to A.P.C. and then the R.A.S.C. He went up to Christ Church Oxford and became a Preparatory Schoolmaster. His address in 1951 is given as the Naval and Military Club at 94 Piccadilly, London W.1.

I hope this is of interest to you."

Yes, it is, Michael, and thank you so much!

First of all, it's quite exciting to think that there may be a story or two, and perhaps even a photograph, of a young George lurking in a school paper somewhere at Harrow. Mills arrived at Windlesham House School in 1925 after having attended Oxford as a schoolmaster and immediately became involved in that institution's stage productions. It isn't difficult to imagine that, as a boy, Mills had been involved in extracurricular endeavors at Harrow that included drama, and that Harrovian student productions were well covered by the school paper. 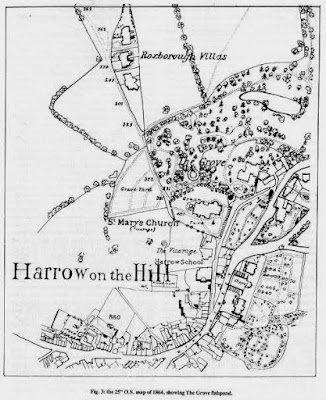 "The above makes even more sense when one reads the current description of The Grove on Harrow's website:

The Grove is situated on what is nearly the highest point of the Hill, next to St Mary's Church, and is home to about seventy boys.

The Grove occupies a central and prominent position near the highest point of the Hill, yet its quiet location is an attraction. Boys come from all over the United Kingdom and links with more distant prep schools are actively maintained. The Grove is strong in Art and Drama, and increasingly in Music, with a longer reputation for sporting prowess.

Variety in the intake of boys gives the House its strength, and its success depends on their talent."

Given the proclivity of George Mills to have been involved as a schoolmaster in the arts, particularly drama and music, as well as sports, The Grove must have been a perfect locale for his education!

I suppose it is even possible that we might gain a clue as to where George Mills went when he departed The Grove in the summer of his 15th year. Mills reappears in the historical record in the summer of 1916 when he is recruited to the Rifle Depot in July and sent off to war.

Still, one wonders what a sixteen-year-old in early 20th century England, from a well-to-do family and with an education at Harrow does with himself for four years. 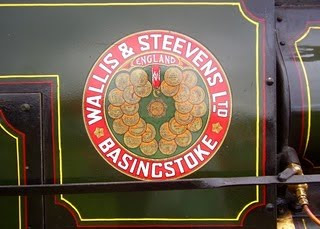 I've speculated that the teenaged George may have tried to follow to some degree in the footsteps of his uncle, Major Dudley Mills of the Royal Engineers, eschewing the military for the time being and becoming an apprentice at the engineering firm Wallis & Steevens, Ltd.

However, that supposition rests on the tenuous evidence of a ship manifest from 1915 containing the name George Mills, who at the time was a 19-year-old British apprentice sailing from Buenos Aires to Liverpool with then-54-year-old Alfred Wallis of the famed engineering firm [right].

The point of Stanley Elkin's novel, George Mills, is that the world has always been populated by a plethora of run-of-the-mill, indistinguishable men by the name of George Mills. Hence, basing any supposition on a U.K. document containing the name 'George Mills' is, I realize, a longshot.

However, while freely admitting it may not actually be the case, I have no other peg upon which to hang my metaphorical hat regarding the missing years of George Mills, 1912-1916, especially since Mills signed his army recruitment papers with his occupation listed as "student"—a term which could loosely, I suppose, be applied to an apprentice, particularly one from a scholarly family such as George's. 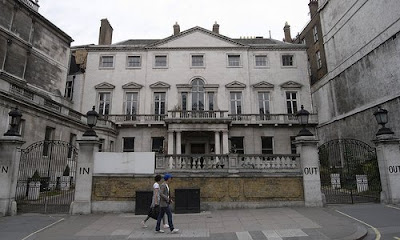 One other interesting aspect of the above information is George's 1951 address: The Naval and Military Club, then at 94 Piccadilly, London W.1. [left].

We've seen George use this address before. In 1944, he wrote The Times about the Royal Army Pay Corps, having been an officer in it recently, and used that exact address. And, now, here we have Mills still using the same one some seven years later.

His father, Rev. Barton R. V. Mills, used The Athenæum, Pall, Mall, S.W.1 [below, right], as his professional address even when he lived nearby in Kensington. The Military and Naval Club is, coincidentally just blocks away from his George's father's haunts at The Athenæum in 1951, and less than a mile away from the family's past residences, west of Green Park and Buckingham Palace.

George's mother, Edith Mills, had passed away in 1945 while living with George's sisters in Kensington. By 1947, the spinsters Agnes and Violet Mills, had moved to Grey Friars in Budleigh Salterton, where George was certainly known to have resided, where he passed away in 1972, and where he may have been buried. 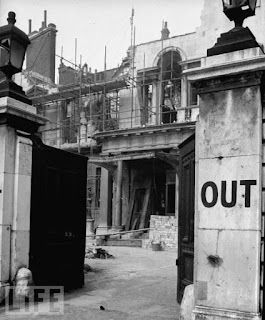 It's possible, I suppose, that Mills resided at the Military and Naval Club after the war, well into the 1950s. I understand that it's affordable for one to stay there now, compared to other lodging in central London. It may have been even more affordable at the time, especially given that it would have been undergoing construction to repair bombing damage in 1941 [pictured in Life magazine in 1941, right].

The question becomes: After relinquishing his commission in the RAPC due to ill-health in 1943, where did Mills go? Did he then live in Cadogan Gardens with his mother and sisters? And, after the Misses Mills departed for Budleigh in 1947, did he tag along, or stay? Or even relocate elsewhere—something quite possible given his lifelong inclination to Sussex?

Thank you, Michael, for the information above! It inches us closer to a more thorough knowledge of the author, George Mills. But, as always seems the case, with answers come new questions. And if you have any information that can help, please don't hesitate to contact me!