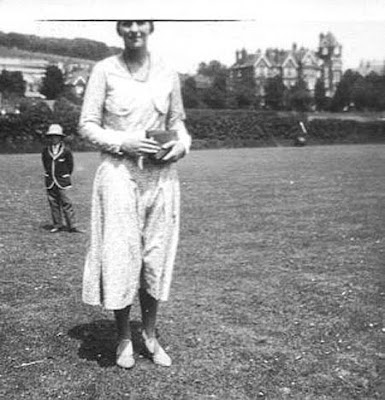 While plumbing the depths of the military file of George Mills during the Great War, another message from an old friend was put on the proverbial back burner. A couple of weeks ago, Michael Ockenden of the Eastbourne Local History Society e-mailed with some news and some images. These images recalled our indistincy knowledge of the whereabouts of Mills during the period from 1922 when he ostensibly departed Oxford University without a degree, on through to Oxford University Press's publication of his first children's novel in 1933, which was presumably done while George and his wife, Vera, were living in London.

Eastbourne Local History Society has been given some photographs of Warren Hill School. They were taken between 1928 and 1931. Alas no shots of George Mills but we've found one of the headmaster, Mr J Goodland, to whom Meredith and Co was dedicated. There is another of a previous headmaster, Mr F R Ebden. A local street directory gives Ebden as joint principal with Mr J Goodland in 1929. 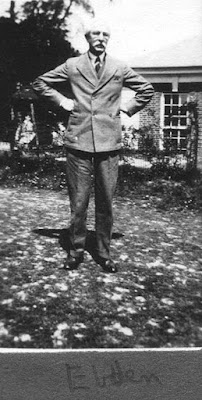 By the way, an undated leaflet (not part of the album of photos) published by the school shows the sole principal as Joshua Goodland MA (Trinity Hall, Cambridge). This leaflet must have been published after the departure of Ebden in 1931, so probably in 1931 or 1932. There is a list of teaching staff and Mills is not mentioned.

Another photograph shows a woman and is captioned, "Jim" Goodland. She seems quite a bit younger but could have been the headmaster's wife, sister or perhaps a daughter. She is not mentioned in the leaflet and so was not a member of the teaching staff.

Is there a school dog in Meredith and Co? There are several photographs in the batch showing a dog called "Tiny".


We've had a chance to look at the history of Warren Hill School in the past. To review, George Mills wrote in the dedication to his 1933 book, Meredith and Co., "To MR. J. GOODLAND, sometime Head Master of Warren Hill, Eastbourne; to the STAFF AND BOYS OF THE SAME SCHOOL, and to those of WINDLESHAM HOUSE, BRIGHTON, THE CRAIG, WINDERMERE, and the ENGLISH PREPARATORY SCHOOL, GLION, among whom I spent many happy years, this book is affectionately dedicated."

Now, we've read that dedication several times before. My assumption—and it may be incorrect—is that Mills listed Warren Hill School first because it was most proximate in time to the publication of the book. I know if I wrote a text and thanked my employers, I would thank my current employer first, and by name. I would probably do the same if I was currently unemployed and was planning on using that most recent employer as a primary reference.

However, Mills simply may have listed the schools in chronological order, Warren Hill (whose headmaster possibly gave him his first job as a schoolmaster) and the English Preparatory School at Glion last. Or, just the reverse: His most recent experience at Warren Hill, dating back to getting his feet wet, so to spoeak, as a novice in the snows of Glion.

We do know the opinion of respected Windlesham House Association historian, Dr. Tom Houston, who wrote: "[Mills] taught at three other schools probably after Windlesham; viz; at Warren Hall, Eastbourne (a 19th century school closed in 1930s or 1940s); at The Craig, Windermere (founded 1899); and at the English Preparatory, GLION."

His speculation is likely based, at least in part on this bit of information from the school's archives: "During summer 1935 he visited Mrs Charles, then in Springwells, Steyning, W. Sussex, and told her he had written a book 'largely about Windlesham', published by O.U.P. 'He had been at 2 or 3 schools since, but is very faithful to Windlesham', she said."

He concludes: "My guess is that Mills came to the school soon after leaving university to teach English or 'English subjects'; that was a junior appointment, seldom held for long."

Assuming that Mrs. Charles was reasonably correct in her guess of "2 or 3 schools" after Windlesham, that very probably kicks Windermere and Glion into the post-1926 period of George's career. Warren Hill, however, still may have come before Windlesham in the chronology. If so, though, why would Windlesham have had a record of George's alleged degree (BA Oxon), but not of his prior teaching experience in nearby Eastbourne.

While it is possible that Mills worked at Warren Hill before Windlesham, one has to defer to Dr. Houston's opinion based on his assessment of the primary sources. Mills must have joined the staff at Warren Hill after departing Portslade.

Laboring now under the opinion that one works close to home, and in failing at that, then has to travel farther and farther afield, I estimate that Mills taught at Windlesham, Warren Hill in Eastbourne, The Craig at Windermere, and the English Preparatory School in Switzerland, in that order. 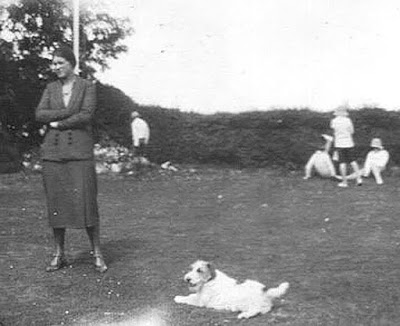 Even allowing for just one year in Cumbria and one year at Glion, and those being 1931 and 1932 respectively, that puts Mills at Warren Hill in the neighborhood of 1927 – 1930.—and this meshes perfectly with the date of the "list of teaching staff" that Michael mentions above.

By 1933, according the information above, Joshua "Jim" Goodland is no longer listed as a principal of the school, perhaps explaining George's description of him as being "sometime Head Master."

You can see the photographs Michael sent throughout this post. Perhaps I am being overly nostalgic about the past (indeed, a depicted past from before my birth), but it is easy for me to see (and the feeling is almost palpable when one reads his books) why relatively idyllic images such as these, etched in his memory, must have seemed to Mills to have been his halcyon days.

Oh--and Uggles, a bulldog, was an extremely important and lovable character in Meredith and Co. and its sequel, King Willow. Even though there had been a gog, Tubby, at Windlesham, I actually would be surprised if I was told that Tiny [pictured, right], Warren Hill's dog, had done nothing to inspire some of Uggles's shenanigans.

Once again, I am indebted to Mr. Ockenden and the entire Eastbourne Local History Society for their thoughtfulness, generosity, and kindness.