Tracking Ernest and Kenny Goodland across the Globe 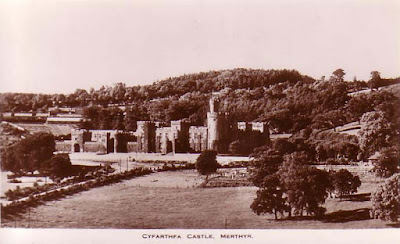 There are no U.K. records for the passing of any Margaret Esther Goodland. Perhaps she married, but there is no U.K. record of such a marriage. Margaret Goodlands with a different middle initial got hitched, and perhaps she is one of them: A transcription error.

There are death records for three women named Esther Goodland, in 1926 (Bridgwater, Somerset), 1943 (Bristol, Gloucestershire), and 1950 (Cheltenham, Glocestershire). All those locations are close geographically to some key locales in the lives of the Goodland clan—but they all can't be our Margaret. In addition, we have no knowledge of her being referred to as Esther instead of Margaret. With a mother named Frances, there'd have been no need to call her by a middle name.

The Goodland girls disappear into the mists of time. Let's take a look at some of the brothers of the clan to find out if any struck it rich by 1901 or so and could ensconce a widowed mother in London and fund brother Joshua Goodland's lengthy higher education.

Kenny Arnot Goodland was born in 1887 during the three-month span of "Apr-May-Jun" in the St. Thomas parish of Exmouth, Devonshire. Kenny was born just six years before his father, Gillmore Goodland, Sr., passed away at the age of 51 [right].

Frances Goodland, his widow, was left with a soon to be 6-year-old boy, Kenny, in January 1893. His brother, Theodore, would have been almost 12. Brother Ernest, would have been going on 15 years old. All three younger sons were all living at home and listed as "scholars" on the 1891 census [below, left].

Margaret would have been 10 years old and away at school in Yeovil when her father died. Spinster sister Grace would have been a ripe old 17 years old in 1893. She was still in Yeovil in 1891, but would she have finished her studies at Park School by 1893? Was she still at home? We just don't know.

Joshua would have been 17 years old, still living in Exmouth with his parents at the time of his father's death. Just two years before, during the 1891 census, Joshua's occupation was recorded as "school teacher's assistant" and he was at home when the count was made.

In 1891, there was also a 29-year-old Eliza Butland living with the family. Butland was Frances Goodland's maiden name, and she is listed as a "sister" who was "living on her own means." Was she yet another mouth to feed, or had she a fortune that allowed her to pay board?

The last entry on the Goodlands' 1891 census form [seen, left] is Emily Darling, a 55-year-old widow (apparently not a family member) from Cheltenham, Gloucestrershire, who was also "living on her own means." She, however, is listed as a "boarder." Emily was the widow of Andrew H. Darling, recently of 66 Bromley Street, London, but born in Northumberland, who was a "Missionary to Foreign Sailors." Would I be correct in assuming that a family taking in at least one boarder—and with no servants on hand—was not flush with money?

Back in 1881, the Goodland household had two boarders—both pupils at the elder Goodland's school—as well as a nurse and a general domestic servant.

This simply doesn't seem like it would have been a rich family by 1893, with a flock of children still in school, a deceased father, and a 44-year-old widowed mother.

Let's scratch young Kenny Goodland from the list of possibilities regarding the care in London of his widowed mother and Cambridge education of Joshua.

Kenny, who would have been about 14 years old, cannot be found on the 1901 census. He wasn't with his mother, visiting in Islington. And he doesn't show up at any home or as a boarder at any school. 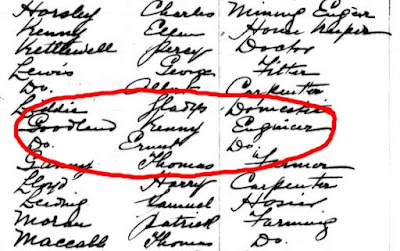 He won't show up on the 1911 census rolls, either. On 27 July 1907, the HMS Miltiades, sailing from London under the command of A.H.H.G. Douglas, R.N.R., steamed into Sydney, New South Wales, bearing Ernest and Kenny Goodland as passengers [right]. The occupation of both is listed as "engineer." Would this imply some relatively advanced schooling achieved by both? It's hard to say. The last record we'd had of Ernest was the 1901 census from Glamorganshire, Wales, and his occupation was recorded as "sailor (mate)." I cannot say with any accuracy what the occupation "engineer" might have implied in 1907.

I can, however, find records that Ernest had visited Sydney at least once before. He sailed into the harbor there on 23 September 1896 at the age of 17 on the Carnedd LLewelyn of Liverpool, having departed from Sharpness, Gloucestershire. He is listed as a crewmember with an occupation of "APPTICE," presumably "apprentice."

1896 is just three years after Gillmore Goodland's death. Ernest, a 12-year-old "scholar" on the 1891 census, is at sea as an apprentice, perhaps implying there was no money to continue Ernest's education. In 1901, he'd become a sailor's mate, and in 1907 he claims he is an "engineer." I'm not sure exactly what to make of this career arc, but my best guess is that Ernest had not become a wealthy man between 1893 and 1907.

The 1914 Electoral Rolls of Victoria, Australia, record Ernest and Kenny Goodland living at Irymple in Mildura, Victoria. Kenny is listed as an "accountant." Ernest is listed as a "labourer." Let's scratch them both off the list of possible monetary benefactors of their mother, and brother Joshua.

Ernest would marry Winifred Margaret Owen in 1908 and they eventually would have three children (although Australian records are spotty at best) who would live on and off with Ernest or near their mother for many years, Owen Ernest Goodland, Gilmore Frank Goodland and Kenneth Garnier Goodland.

[Note (31 July 2011): We now know that Winifred sailed alone into Australia in 1908 to wed Ernest. She returned to Wales in 1911 with her son, Frank Gilmore Goodland, to visit family, Florence and Selina Owen, in Cardiff, Wales. They were recorded on the census that year. Thanks to John Owen, a descendant, for the insight! (Selina was John's grandmother.)]

Ernest would eventually become a director of International Harvester Co. in Australia. 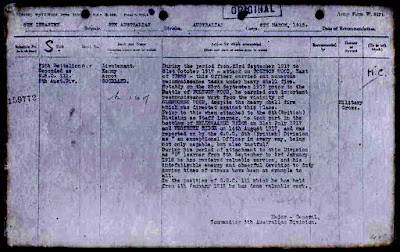 Incidentally, Kenny (described on his enlistment papers as a "secretary") would enlist in Australian Imperial Force in 1915 and become a decorated war hero, having served first as a 2nd lieutenant and then as an temporary acting captain in the 29th infantry battalion, which embarked aboard the HMAT Ascanius on 10 November 1915.

He earned the Military Cross [description, left] on 18 March 1918 (according to the London Gazette of 3 June 1918), and was awarded the title of "Chevalier" upon being awarded the Order of the Crown of Roumania (with Swords) [pictured, below, right] early in 1919 (London Gazette, 20 September 1919). He also earned the French Medal of Honour—Gold [Medaille d'Honneur Avec Glaives (en Vermeil)] according to the London Gazette, 5 November 1920.

He also accrued the famous trio of the 1914-1915 Star, the British War Medal, and the Victory Medal. His courage and demeanor are mentioned and praised in numerous recorded despatches throughout his service on the Western Front and in Egypt during the Great War.

He would marry Constance Robinson in New South Wales in 1926. They apparently would have no children and live together on and off through Kenny's retirement. His last employment was as an "industrial officer" of Broken Hill Proprietary Co., Ltd., in Newcastle. The final document recording the couple is dated 1954. I have found no records of their passing.

However, the most interesting aspect of Kenny's military records, however, is recorded upon his embarkation in 1915. 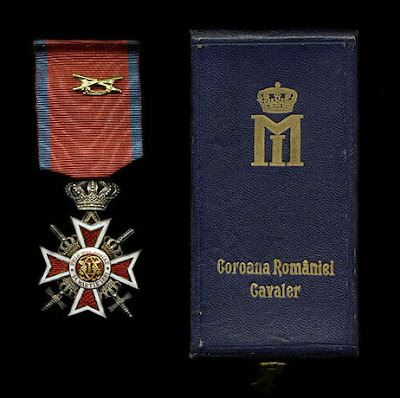 His next of kin is listed as "Mrs. Francis Stirling, mother, Belliela, Mildura, Victoria."

It seems Frances M. Goodland, widow of Gillmore Goodland, Sr., relocated to Australia sometime after her residence at Gresham House, London (Joshua used her address there as his own "home" on a ship's manifest during travel in January 1908), and not only settled near sons Ernest and Kenny (who were still rooming together in 1914), but was already remarried to a gentleman named "Stirling" by that year. (It's unclear if "Francis" was his Christian name, or a clerical misspelling of hers.)

In examining Messrs. Ernest and Kenny Goodland, we don't find fellows who'd have been bankrolling both their mother and brother between their father's death in 1893 and the end of Joshua's education at Cambridge in 1908—a full 15 years—but we do find the children to whom Frances M. Goodland eventually gravitated for some sort of support, even if that support was not measured simply in dollars or pounds.

So, how did Frances end up in London? And how could Joshua afford to spend eight travel-filled years at Cambridge? We've narrowed the list of possible philanthropists down to two: Brothers Theodore Thomas Goodland and Gillmore Goodland, Jr. Theodore, as we've seen, was just 11 at the time of his father's death, but we'll take a look at his interesting and apparently somewhat lucrative life next time.