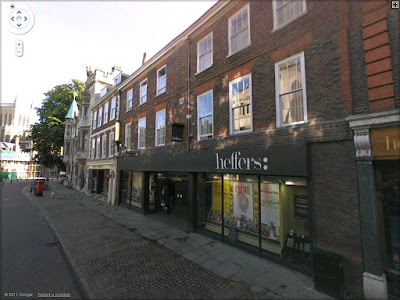 After a much-needed "fix" of Opening Day baseball—and isn't it ironic that the contest of my greatest interest was played in Philadelphia amid 41°F temperatures and a frigid winds that starched the pennants?—Spring finally has sprung in my mind and I'm ready to return to the life of Joshua Goodland.

So Goodland was still residing at 20 Trinity Street [as seen today, left] when this was published, having received his bachelor degrees, and was working on his M.A. This is assuming that, in 1906, one actually needed to be studying at the university to earn an advanced degree. Twenty-three years earlier, we know the Rev. Barton R. V. Mills earned an 1883 Oxon Master's degree which "required no further study or residence" at Oxford at that time.

Goodland's entire time at Cambridge wasn't spent with his nose to the proverbial grindstone, however. Vyvyan Holland, in his autobiography, Son of Oscar Wilde, reminisces: "Trinity Hall specializes in Law and has provided the Bar with many of its greatest lawyers," and Holland and Goodland were to be among them. He nostalgically continues: "Having been duly entered as an undergraduate at Trinity Hall, I spent the remainder of the Long Vacation at Seaford, with Goodland and another Law coach. And there I had the misfortune to learn to play golf, an affliction from which I have never wholly recovered."

We already know that Goodland and Holland, along with Australian-born school mate Peter Wallace, traveled to Sweden and Russia as well as spending time hunting in Quebec. This additional "Long Vacation" is interesting for a few reasons.

First, we find further evidence of Goodland being an avid sportsman. Holland's specific use of the first-person singular implies that Goodland at the time was already acquainted with the 'good walk, spoiled,' and (Goodland being ever the teacher) may have even been Holland's first coach on the links. 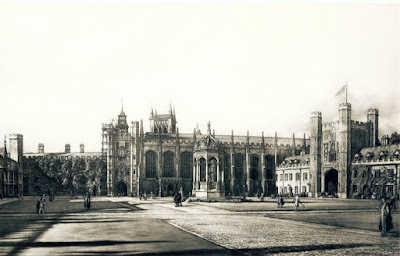 It also forces one consider the economic aspects of that long holiday in Sussex, though, as well as Goodland's other vacations. While I am aware that costs then were nowhere near what they would be now, he was still the son of an elementary school teacher. No census shows Joshua's father, Gillmore Goodland, Sr., as having been a "Head Master," the family did not live at the school (in fact, we don't know the name of Goodland's institution), and neighbors of the Goodlands through the senior Gillmore's death in 1893 are described uniformly as laborours, plasterers, carpenters, grocers, tailors, retirees, and a wine merchant's assistant, according to census records. Could the widow and family, especially with the father deceased, have had the means to send a working age son off to Trinity [pictured, right], especially with younger children in the brood?

Between 1893 (when he was about 20) and 1906, Joshua went to Cardiff, Glamorganshire, Wales (to spend several years as an apprentice to architect G. E. Halliday), was briefly practicing architect himself in 1899, and, in 1900, he enrolled at Cambridge, studying law.

1906 found Joshua still at Cambridge, and enjoying golfing, shooting, and traveling—taking, in fact, at least one trip around the world during those years—before he actually began practicing law after earning his Master's in 1908. During those years, he was using his widowed mother's address at Gresham House, London, as his "home address" for at least part of that time.

With a mother apparently ensconced in London just north of the Temple, and her son Joshua studying law for eight years (and traveling around the world between lectures), someone must have had some real money, somewhere.

To understand fully Joshua Goodland's lengthy experience at Cambridge, it's probably necessary to adhere to the advice given in this entry's title (from the film All the President's Men): "Follow the money." 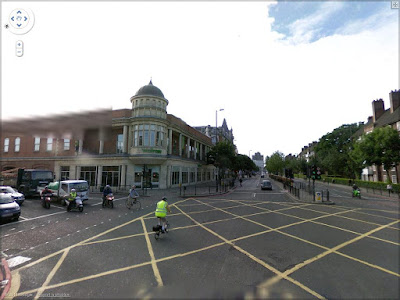 It's possible that Goodland was doing architectural work on the side to earn some cash. Still, could it have been enough to pay for school, lodging, and his first class "saloon" tickets on voyages circumnavigating the globe? Add in the hotels, the meals, and the entertainment at exotic locales—I don't envision Goodland, Holland, and Wallace booking austere stays in monasteries, hostels, or cloisters while ashore after having traveled first-class—and it seems that doing enough plans for small builders as a side line might have made it quite difficult to keep up with his studies. After all, I understand Cambridge somewhat of a rigorous academic institution!

There simply are no probate records available to me that would indicate what sort of legacy school teacher Gillmore Goodland, Sr., might have left to his widow and children. I am an elementary school teacher, though, and it is no "get rich quick" scheme...

The 1901 census records the elder Goodland's widow, Frances M. Goodland, 55, as a woman "living on [her] own means," and visiting a friend at 358 Holloway Road in Islington [pictured today, upper left]that day, 31 March. The only resident at 358 on the census form is the house's "Head," Edith Adams, 32, born and residing in Islington, whose occupation is described as "assistant editor," but to which the boldly-scripted word "author" has been added. (Is this Edith U. Adams, author of 1925's The Honourable Philip [A tale.], or Edith C. Adams, author of Idylls of Love and Life, back 1893? It would seem to have been the latter, due to the publication dates, but "author" need not imply the writing of novels. Periodicals were paying writers as well as assistant editors. Perhaps a long-awaited novel came later.)

Sifting through U.K. records for an "Edith Adams" is as needle-in-a-haystack daunting as searching for a "George Mills." I lean toward the above author having been Edith U. Adams, as I have found a record of a woman with that exact name marrying a fellow named Walter H. Ellis in the summer of 1936. I can find no other record that I can be certain belongs to either of them, however. 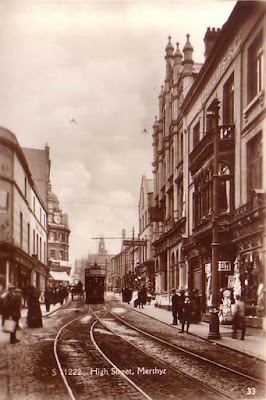 The reason I suspect Edith U. Adams is that her marriage took place in Glamorganshire, Wales—a place, as we will continue to see, that was and is very much associated with the Goodland family! (Interestingly, Edith U. would have been approximately 63 at the time of that marriage, if she is, indeed, the author/editor above.) But there is no reason at this point to believe that Edith Adams (or anyone in Glamorgan; Merthyr Tydfil is seen right) was funneling any money toward anyone in the Goodland family in 1901.

There is no documentation regarding where the visiting Mrs. Goodland above actually lived in the early part of the 20th century, save the address used in Joshua's ship manifests, but she was clearly on her own. Had she inherited enough money from her late husband to allow her both to live in London and to fund her son Joshua's education and travel?

We'll take a look at the fortunes of each of them, as the 19th century careened into the 20th, to see if any of them could have been the source of the money that was allowing Joshua to attend Cambridge and his mother to live in town by her own means. And what an interesting group these children are!

See you next time!