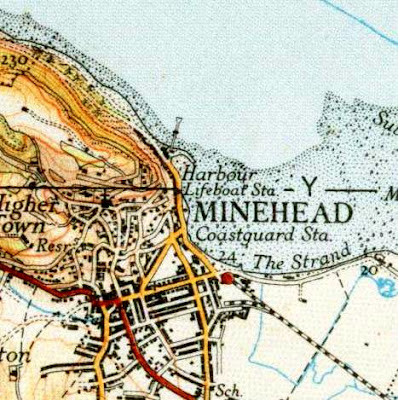 Well, what do you know? I'm finally getting efficient at manipulating the painfully cumbersome search engine at The Times. My latest discovery is the death notice of Vera Louise Beauclerk Mills, beloved wife of George Mills, who passed away on 5 January 1942 at the age of 48.

This appears in The Times four days after Vera's actual death [right; double-click images to enlarge]. There is no mention of any services or flowers, so could one presume the body was not returned to London for a funeral, even though Vera had kin on both sides of the family in Kensington?

It may be important to note that George Mills at this time was serving as a paymaster in the Royal Army Pay Corps, and had been for well over a year. My speculation had been that, since Vera died in "Exmoor" according to records available at ancestry.com, he may have been assigned to the temporary pay office set up in Ilfracombe. Now, knowing that Vera must have been living in Minehead, it's more likely that Mills was serving at the pay office in Taunton, near family land and where his grandfather once served as M.P. If George had actually been at Ilfracombe, he'd have been almost as close to Minehead as Taunton, but what is now solidly the Exmoor National Park would have had to be traversed near the sea during winter.

Despite living often in London, George Mills showed a proclivity to be seaside throughout his life, possibly stemming from his boyhood in Bude Haven, Cornwall, near the Celtic Sea. Portslade, Brighton, Eastbourne, Seaford, and Budleigh Salterton on the English Channel were all places where Mills later in life either worked or lived. 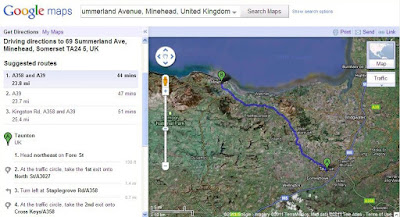 Was Vera living with a family a block or two from Minehead's Esplanade, waiting for Mills to be granted leave so he could travel from Taunton [pictured, left] and spend a weekend with her now and then by the Bristol Channel? According to Wikipedia, "Evacuees were billeted in Minehead during the Second World War." Perhaps while an evacuee in the strictest sense, Vera probably traveled to an area well away from the Blitz to be near husband George.

Did the fact that Samuel Taylor Coleridge and William Wordsworth often strolled the hills above Minehead also enter into George helping find a nearby place for Vera? Wikipedia: "The wooded bluffs above Minehead feature as the Hermit's abode 'in that wood which slopes down to the sea,' in The Rime of the Ancient Mariner" by Coleridge. Mills, apparently a schoolmaster of "English or English subjects" in his career before the war may have had a soft spot in his heart for the work of the two Romanticists and encouraged Vera to hunker down there, below the rise [below, right] where the two giants once trod. 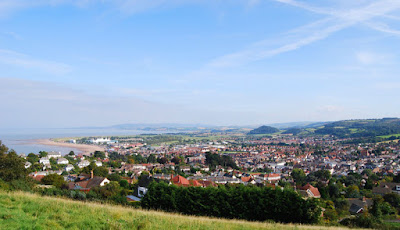 How Vera died, we do not know. Heart attack? Stroke? Possible, but at 48 not as likely as at 58, I suppose. Car accident? Could be.

Her death record lists the location as being "Exmoor, Somerset." Perhaps that was almost the same as saying "Minehead, Somerset" in 1942—I don't know. One might think, perhaps, a fall from a horse while riding in the vast forest, but on January 5? I guess that could be more likely than I suppose, but I wouldn't think so now—not in winter. No matter: Whatever happened must have simply shattered Mills.

Anyway, the world and the war had certainly begun to change in the four weeks prior to Vera's unexpected passing. The bombing of Pearl Harbor had thrust the United States into the war in both the European and Pacific theatres. What that meant to the British I'm uncertain, but it had to be a lift knowing that reinforcements would be arriving after the frustratingly isolationist Americans were finally involved.

Just a glance at the headlines [below, left] in The Times from the day of Vera's notice, January 9th, shows clearly how worldwide the war had become and how much of the surface of the Earth deeply concerned citizens in England. 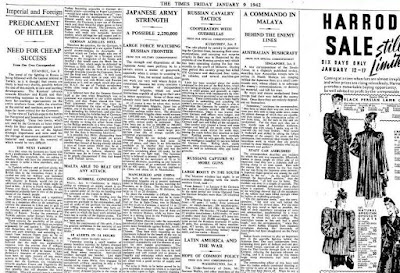 Now, for all we know right now, Mills could have been assigned to Ilfracombe, or to Wolverton, Nottingham, or York. He might have already been assigned to post near a front. Perhaps Vera or George had friends or family in Minehead, or could it even have been that Vera had been evacuated—Could she have been injured?—from London for her own good, regardless of George's geographical location at the time? Could she even have been volunteering at the children's home at Holnicote. After all, Holnicote was on the huge 12,500 acre Exmoor estate owned by the Aclands—kin of George Ramsay Acland Mills.

The question there is: Why would Vera have been staying at 69 Summerland Avenue when Mills's relatives had vast holdings in the area. The domicile on Summerland is lovely, but not exactly what would seem to me to be Acland-worthy, at least not back at that time, when the land was may still have been, or else extremely recently was, Acland land.

We don't even know how close George was to that side of his family at the time—his sisters, Agnes and Violet, lived with their mother, Edith, who may have tended to be closer to the Ramsay clan after the death of patriarch Revd. Barton R. V. Mills. The only person by that name who attended George's 1925 wedding was a "Miss Acland," whose name was not listed by The Times anywhere near the close family.

Of course, George's step-brother, Arthur Mills, and sister-in-law, Lady Dorothy Mills, did not attend what appears to have been a fairly lavish society wedding in Brompton and the Hans-crescent Hotel.

Why, exactly was Vera in Minehead? Had it anything to do with the Aclands? Had it more to do with the proximity of the Taunton office of the RAPC? Or had it simply been that Vera had been evacuated there and never made it back to London? Who owned 69 Summerland (Oh, for a copy of Kelly's Directory, Somerset, for 1939!) and how did Vera hook up with them? And where was George?

As always, if you have any information to share, no matter how little it may seem, please contact me. It would be greatly appreciated!