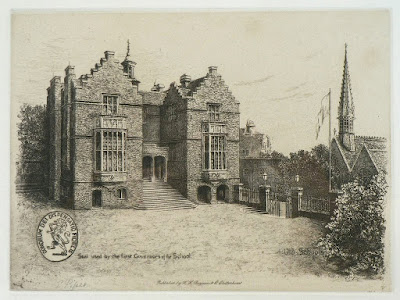 A recent contact has brought to mind something I'd researched, but had never written. I'll expand more on that contact at a later date, but today—with the new year arriving here in Florida this morning with mild breezes tickling the desiccated grasses—I thought I'd re-examine his questions: "Why George Mills? How did your interest in him originate?"

I'd been watching an episode of Ever Decreasing Circles on evening when a character made a statement regarding "King Willow." Being an ignorant American, I was interested in finding out about this King Willow, so I did an internet search.

It soon became apparent that "King Willow" was a reference to Edward Ernest Bowen's poem [and song] "Willow the King." And that character seemed to have been personified in a book that I found at amazon.com: King Willow, by an author I knew nothing about, George Mills.

Out of curiosity, I ordered the book, and quickly found out that no one knew very much about George Mills, and that finding information on someone of that name was like seeking the proverbial needle in the haystack.

I'd written about that bland story before, and have blathered on endlessly about how difficult it's been to squeeze information about George out of the worldwide web, but have neglected to follow up on the "link" between Mills and Bowen. 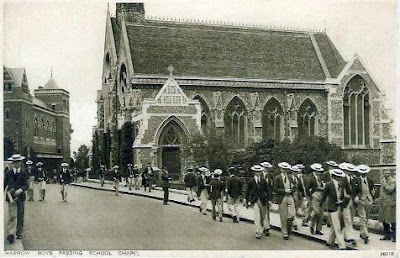 According to wikipedia.com, Bowen was born 30 March 1836 in Glenmore, County Wicklow, Ireland. He received his education at King's College in London and Trinity College, Cambridge, before being named a an assistant master at Marlborough School in 1858. He moved to Harrow School in 1859, the year that controversial headmaster Charles John Vaughan—a close friend of Arthur Mills, M.P., grandfather of George Mills—left Harrow amid rumors of an alleged homosexual affair.

George's father, Revd. Barton Reginald Vaughan Mills—who'd been named in honor of Harrow headmaster Vaughan—attended Harrow in 1870 and 1871 while Bowen taught there.

When it came time to find a school for George Mills, Barton sent his son to Harrow, where young George spent 1910 through 1912.

House Master Bowen had passed away on 8 April 1901 at Moux, Côte-d'Or, France, but his legacy at the school must have made the presence of his spirit palpable for George. Not only had George likely heard stories of Bowen from his father, but Bowen's effect on the campus was undeniable.

Wikipedia continues:
"As a schoolmaster, Bowen believed that boys must be interested in his lessons and at ease with the teacher — in contrast to the grave formality typical of the Victorian era schoolmaster. He was the founder of the 'modern side' at Harrow, which gave prominence to subjects other than Latin and Greek.

Bowen was also an enthusiastic sportsman and pedestrian... At Harrow, he was the first master to identify himself thoroughly with sports and games." 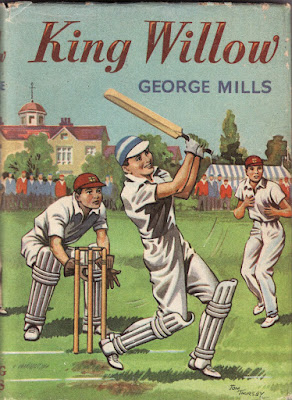 A cursory reading of Mills's three books about prep school boys—Meredith and Co.: The Story of a Modern Preparatory School (1933), King Willow (1938), and Minor and Major (1939)—makes it obvious that Mills fancied himself as a teacher molded in the image of Bowen.

Mills was apparently a teacher of "English or English subjects," and the character patterned after himself in each of his novels teaches French, as opposed to Latin or Greek. Those characters also assist with the cricket and football [soccer] teams, and King Willow [pictured, left, circa 1960] is largely about the boys on the cricket team at fictional Leadham House School.

Mills was also involved in theatrical and musical productions, at least a Windlesham House School, then in Portsmouth. His belief in a "modern" education for boys clearly contrasts with the Victorian paradigm mentioned above, one that, in the middle of the 19th century at Harrow, was referred to by Jonathan Gathorne-Hardy as "an adolescent boy's jungle; a jungle where lust and brute strength raged completely unrestrained."

Barton Mills and his son, George, were products of the more sensitive approach brought to Harrow at least in part by Bowen. It's no wonder Mills found the man to be a fine model, presumably for both himself as a schoolmaster, and for the best headmasters and instructors in his novels.

I'll end this post with words from Bowen himself. Below, find the text of "Willow the King," along with an excerpt regarding the poem from the book Harrow School, edited by Edmund Whytehead Howson and George Townsend Warner, and his biography from the book A Timeline History of Harrow School, offered by the Harrow Association [click to enlarge].: 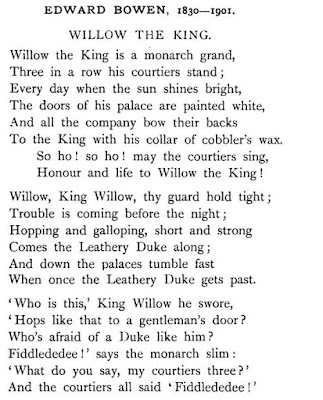 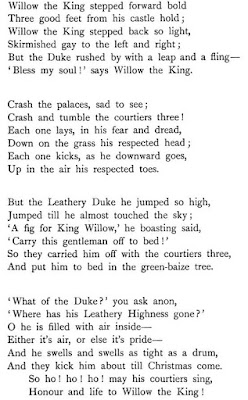