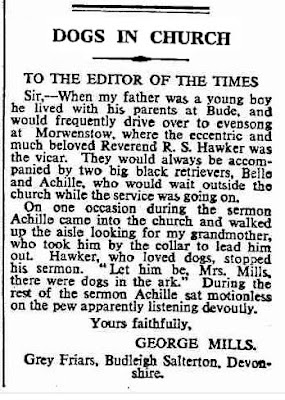 Churches seem to have always played an important role in the lives of the Mills family. This is probably no better exemplified than by the letter that George Mills wrote to The Times on 8 April 1959 entitled "Dogs in Church," apparently in reply to an on-going, whimsical thread of mail that had struck a chord in Mills. The missive is a nostalgic retelling of a story that George's father, the Revd. Barton R. V. Mills often told about going to church with his parents, Arthur Mills, M.P., and Lady Agnes, as well as their black retrievers, Belle and Achille.

The last line of the death notice of George Mills that we saw yesterday reads: "Funeral service at the Roman Catholic Church on Wednesday, December 13, at 10:30 a.m." Friend Michael Downes couldn't find a grave for Mills in the local burial ground in Budleigh Salterton (although that may have been due to the inclement weather), and until we know where George rests, his story in Budleigh ends in a church with that 10:30 a.m. service.

It's a dazzlingly sunny morning here in Florida, but cuttingly cold for this part of the world [37°F / 3°C] and the level of insulation found in the houses. However, technology has advanced to the point where I can sit here and virtually stroll around Devonshire, exploring—thanks to Google Maps. I know this won't be of interest if you are a resident of Budleigh Salterton, but for me, it's exciting to see the town across the pond! 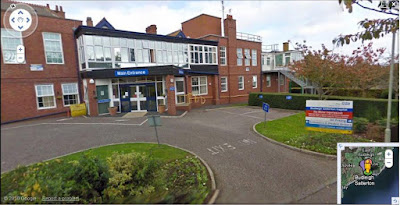 First, let's look for the Budleigh Salterton Hospital [above] where Mills peacefully departed. It's at the corner of Boucher and East Budleigh Roads in what is apparently Otterton. Really it's just across the croquet lawns and cricket fields—both sporting loves of George—from his home, Grey Friars. It's about 1500 ft. from the Mills home to the main entrance of the hospital, but it appears to be a rather circuitous drive from one to the other. 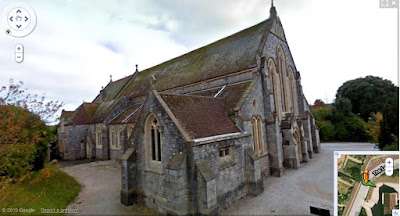 On the way back to Grey Friars, I strolled down The Lawn from High Street and took a look at the beautiful edifice that appears to be St. Peter's Church of England [above], although I couldn't find a sign. After receiving his Master's in History from Oxford, George's father, Barton, had been a vicar in the Church of England from 1887 through 1901, as well as having been a chaplain briefly in San Remo, Italy, and an assistant chaplain at the Royal Chapel at the Savoy. Subsequently, the senior Mills worked as a religious scholar and as a military chaplain during the First World War.

We know, however, that Barton Mills converted to Roman Catholicism while at Christ Church, Oxford, before becoming a cleric in the Church of England—sometime before 1885. From the United States, it seems odd that a cleric in one denomination would worship as a member of the congregation of a different denomination—Barton Mills certainly must have missed a few Catholic masses while busy delivering sermons for the C of E at the same hour—but no one I've discussed it with in the UK seems very much surprised by that at all (except for the current Chaplain of the Queen's Chapel of the Savoy, Peter Galloway, who found the news implausible and immediately questioned the authoritative 1885 reference book without even bothering to review it because it did not coincide with his bias). Revd. Barton R. V. Mills appears to have been Roman Catholic by faith, Church of England only by vocation. I leave it to the reader to surmise the tenets of which creed would have been passed, personally, from father to children in such a case.

The entire Mills family's repeated affiliation with Catholicism is far more than coincidental, so it's no surprise at all that George's funeral service was held at Budleigh's "Roman Catholic Church" (also named for St. Peter, a fact left out of the death notice, presumably to prevent confusion among those wishing to attend the service). Grey Friars is virtually equidistant between the two churches of St. Peter, so Mills's spiritual choice of denomination clearly wasn't based on mere proximity. The Mills family clearly was no longer associated with the Church of England. 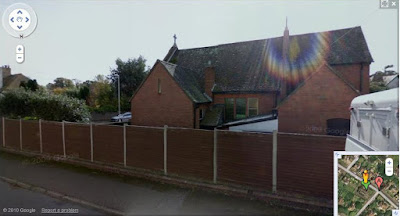 After turning north up Slaton Road and Moor Lane, I turned north on Upper Stoneborough Lane. While walking along Clinton Terrace, I found a lovely, far more simple, brick church [above]. 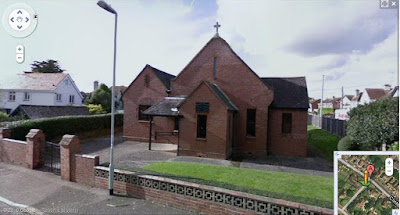 Turning the corner, I found the entrance [above]... 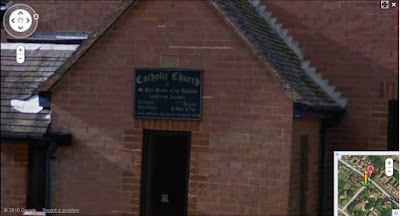 Looking carefully, the sign at front appears to read "Catholic Church of St. Peter, Prince of the Apostles," obviously the location of George's funeral. I imagine Mills closing his dripping umbrella and stepping into the warm, dry vestibule on rainy Sunday mornings... 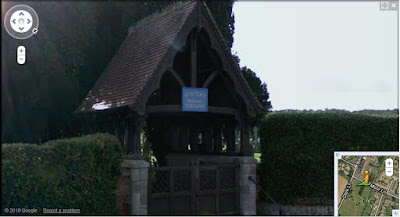 Returning to Moor Lane, I followed it out to the West, to the very end, where it meets Dark Lane, across from the primary school. There I found St. Peter's Burial Ground, presumably where Michael Downes and his wife, Annie, looked for the final resting place of George Mills one misty winter day. 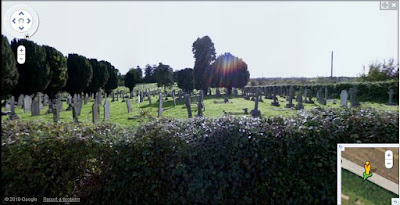 Approaching the entrance, I carefully read the sign, then strolled along the hedge [above], peering over and thinking... Wishing I could enter...

I wonder if this locale is where George Mills finally went to rest. His paternal grandfather was a powerful M.P., and associated with the Efford Down House in Bude, Cornwall. His paternal grandmother was Agnes Lucy Dyke Acland, daughter of Sir Thomas Dyke Acland VI, 10th baronet, M.P., of Broad Clyst, Devon. The Columb John Chapel at Killerton [below] there in Devon was still being used for Acland family burials after Sir Thomas's death. Could George have found a resting place there? 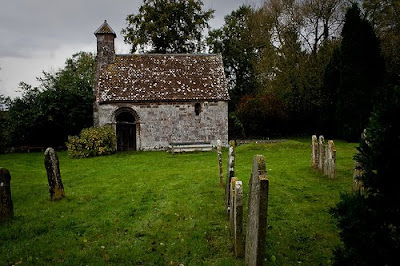 But one wonders where his father, Barton, was buried after his death in 1932? With the Aclands at Columb John, part of the estate where he and his brother Dudley Mills had been raised for much of their youths by the aging Sir Thomas while father Arthur journeyed to many of the empire's colonies? Knowing where Dudley now rests might help in all of this!

George's mother, Elizabeth Edith Ramsay, was the daughter of Londoner Sir George Dalhousie Ramsay, and she may have been laid to rest alongside her father. Might George be resting near his mother in London—or even with other kin in Scotland?

His wife, Vera Louise Beauclerk Mills, was of the lineage of William I on the Beauclerk side of the family, and granddaughter of the legendary Sinophile Sir Robert Hart on the other. Vera, who passed away in 1942 at the age of 48, may have been buried in a family plot with either family. Could it be that George ended up alongside her? 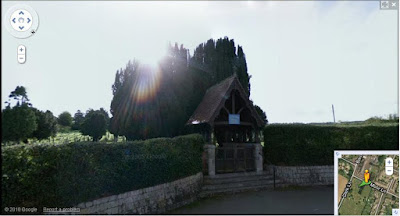 Or is it likely that the childless Mills, along with his spinster (and presumably childless) sisters, Agnes and Violet, rests together with them in the St. Peter's Burial Ground there in Devonshire, near Grey Friars, the croquet club, and the sea, where they'd all lived so happily for a quarter of a century at the end of their lives?

It's even possible, I suppose, that Mills and/or his sisters were cremated. Still, nothing in the family's past would lead me to believe that.

We've followed the life and career of George Mills—schoolmaster, author, paymaster—from his birth in Bude, Cornwall to his passing in Budleigh Salterton, Devon. He spent a great deal of his life moving around, as we're well aware. I'll admit, I'd very much like to know where, exactly, he at long last came to rest.
Posted by Sam [Also known as Harry] at 12:34 PM