"Death is the only pure, beautiful conclusion of a great passion" -- D. H. Lawrence 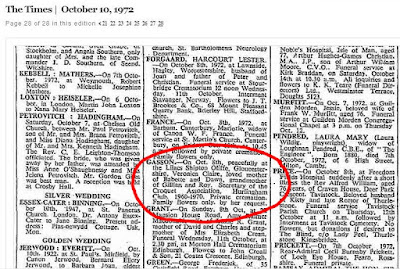 It is with mixed emotions that I sit here writing this on an exceptionally chilly January night here in Florida. Yesterday I finally came upon the death notice of George Mills from The Times. Even a blind squirrel eventually finds a nut...

I've been immersed in complete frustration trying to sort out Mills and his sisters and the lives they lived as croquet-playing retirees in Budleigh Salterton—the search engine at The Times is as unwieldy, unfruitful, and un-user-friendly as you could possibly imagine.

Anyway, I've been logging a compendium of their exploits on the field of play in an Excel document that's growing more cumbersome by the day. Still, I often take the time to keep probing the Byzantine bits and bytes of data that make up the Archives at The Times for other information about Mills and his family. It finally, at long last, paid off! 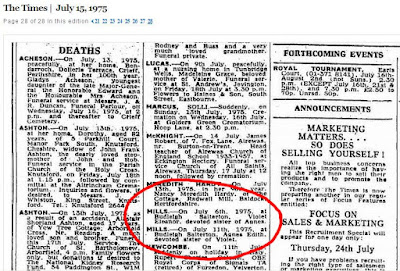 Utterly by coincidence, I acidentally stumbled upon the death notice of a Mills family croquet nemesis (and sometimes partner in doubles), Veronica Claire (V. C.) Gasson, who played at the club in Hurlingham. George and his sisters, Agnes and Violet, often played there, as well as facing off against Gasson in Budleigh Salterton and all around the south of England. [Her notice is pictured, above left.]

I hadn't been even remotely looking for the obituary of any of their croquet-playing cronies, but the surprising discovery of Gasson reinvigorated my quest for the death notices of Mills and his sisters. It wouldn't be easy, but luck would be with me.

I knew from ancestry.com that spinsters Agnes (born in Bude, Cornwall, in 1895) and Violet (born in Kensington, London, in 1902) had died in the same quarter of 1975: Jul-Aug-Sep. It turns out that their deaths were reported in the same issue of The Times, dated 15 July, 1975.

Violet, George's younger sibling, had left us on July 6th. Agnes, a year older than George, passed just five days later on the 11th. Their ages were 72 and 80, respectively.

I knew that if the girls deaths had appeared in The Times, there was no way George's hadn't. I set out to find him, and finally did. 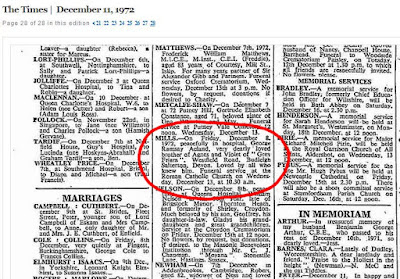 His own notice, which appeared in the paper on 11 December 1972, reads as follows:

Mills had just celebrated his 76th birthday on 1 October.

Now there's a date, and a place—"in hospital"—and a funeral service set for Wednesday at 10:30 a.m.

I should be happy to have ascertained the facts of the matter.

Perhaps it's normal, though, to feel sad.