Of Memories, Healing, and Lost Relatives 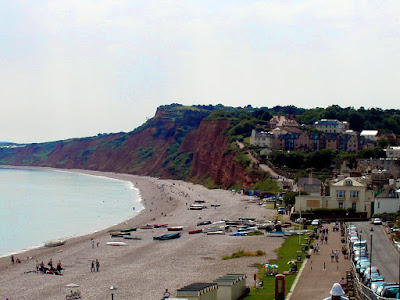 Several weeks ago, about a week apart (likely after the release of the April/May issue of Croquet Gazette, No. 331), I received two delightful messages from the enchanting locale to which we'll return today: Budleigh Salterton.

The first message I received was this one, entitled George, Aggy and Vi Mills, from Joanna Healing, who is well known at the Budleigh Salterton Croquet Club:


I met George Mills a few times, but do not remember him apart from his name.

I, as a child, did know Aggy and Vi Mills, and do have 2 specific personal memories about them.

If you want to know more, I would be happy for you to contact me. 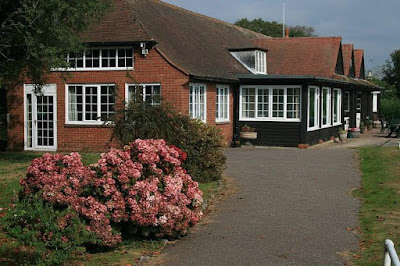 It was with great excitement that I wrote back to Joanna, a lovely person and a keen player who is in the midst of writing a history of sorts about the croquet club at Budleigh.

When she replied, I was delighted. This is also from Joanna:


I remember that Aggy and Vi Mills were very fond of children, and they used to ask my sister and myself to tea every now and then, and play card games with us in Budleigh Salterton. I don’t remember which games. I have always remembered this because on one occasion I peed on my chair and sat there the rest of the afternoon on a wet chair, far too embarrassed to say anything. Of course this was discovered when my mother came to collect us. Everyone was very nice to me, but I was so utterly mortified I refused to ever go again. 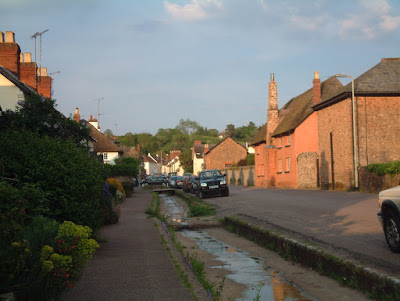 The other memory I have is when Aggy and Vi (and I think George but am not sure) came to our house in Otterton [the village is pictured, left]. My sister and I came back from walking Tarka our Labrador, and found them with a few other friends around the piano singing (probably Gilbert and Sullivan). Tarka rushed in and jumped up against Aggy.

Sir Leonard Daldry used to be our neighbour.

A bridge partner of mine has been compiling a history of the Croquet club at Budleigh Salterton and I attach the history that I have contributed, but it does not mention the Mills, but it might be of some interest. I have added a few bits just for your interest.

Thank you very much, Joanna!

While, historically speaking, the events regarding the Mills described above are not earth-shaking (unless you were the one who had been mortified), they do help us make the Mills siblings far more human. Sometimes the three of them often seem to boil down into bland history: dates and places, births, deaths, marriages, finishes in croquet tournaments, and phone records in agate print. But human beings are so much more. 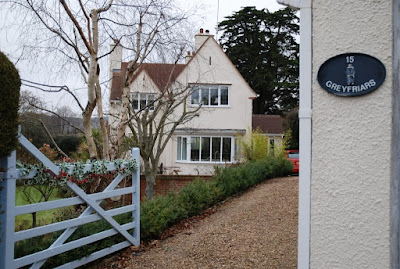 We knew the Misses Mills were "charming" and "very keen" on the Girl Guides and involved in sport of one kind or another for their entire lives. Neither sister, Agnes or Violet, ever married.

Joanna's two anecdotes make them more real, especially envisioning them sipping tea with a neighbourhood youngster at Grey Friars and kindly dismissing the unfortunate accident that had occurred and politely never mentioning it again.

And we already know that the Mills family was disposed to love dogs, although we're uncertain if the Mills owned one while residing in Budleigh. Their travel to croquet tournaments for uncertain lengths of time (one can't always count on making it to the final) could have made it an imposition for them to seek help in caring for a dog.

An insight we once gained via George in a letter to The Times in 1959 demonstrated a longstanding familial love of dogs, and it's no accident that one of the most endearing and popular characters in his books was a mischievous bulldog named Uggles.

And mixing an appearance by an excited Labrador, along with the Mills siblings crooning Gilbert & Sullivan tunes while gathered around a friend's piano, says much about how affable and social the Mills were! My hunch is that, even if her feathers had been ruffled a bit by the excited Tarka, Agnes dismissed it all with a smile and many laughs were enjoyed by all.

Most people are concerned about privacy in this internet age, and rightfully so. Still, Joanna has an interesting reason for allowing me to use her identity publicly:


I ordinarily would say I want absolutely no reference to my name, but for the last about 25 years I have been trying to find my half-sister without success. So I suppose getting my name published would be a good thing. You never know, she might be living within a mile of you. I don’t know if she is alive or dead, what country she lives in or whether or not she ever married. I haven’t seen her for over 50 years.


In addition to Joanna Healing's chilhood memories of the Mills, she also shared some charming recollections of the croquet club at that time. Here are excerpts from her text 1960s – JOANNA HEALING REMEMBERS: 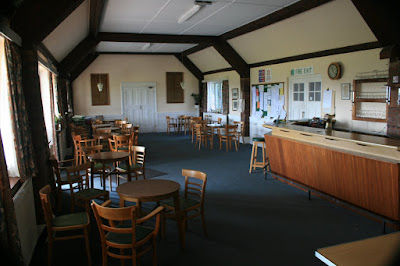 My sister remembers going to a gambling evening where everyone was in evening dress and dripping diamonds and playing bingo amongst other things.

I remember going to a Bring and Buy sale for charity there which had some rather generously donated valuable bits of jewelry and ornaments.

My father was Chairman for one year, but hated the endless waffling at committee meetings. However he did take on the position of Treasurer and did that for over 30 years.

At one end of the bridge room, there are 2 paintings by Dorothy Bradshaw. She was a well renowned artist, and had had paintings accepted by the Royal Academy. She donated the paintings to the club. She was a member, but I don’t think she played bridge.

At one time, it was decided to have a 3d and a 6d room. This was in the days of rubber bridge when the reward I think was 3d or 6d per 100 points gained by the winning players. I think the better players tended to play in the 6d room. The 6d room was where the main bridge room is now, and the 3d room was the smaller room beyond that at the end of the club house.

Bridge was very popular – at one time the only days the club was officially closed for bridge was Christmas day and Good Friday. 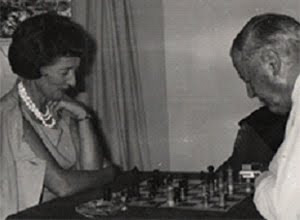 The standard of bridge was extremely high, and the cigarette smoke overwhelming.

In 1964 my mother read a letter printed in The Daily Telegraph and written by a Major Ponder which was rather chauvinistic about women, their brains and chess. My mother wrote back via The Daily Telegraph, saying (amongst other remarks) “Is not one of the world’s greatest players a woman” also “Women think and act quickly, and our days are too busy to waste hours dithering over the next move” also “As an average female I now publicly challenge Major Ponder to a game, or the best of three if he can get through so many in one afternoon”. The Daily Telegraph loved it. They organised a chess match of the best of 3 games to be played at The Palace Hotel, Torquay.

My mother panicked – she hadn’t played chess for 18 months – and she immediately got us her two daughters practising with her, and I seem to remember that she got Brigadier Peters (also a club member) to help her practice also.

At The Palace Hotel, in front reporters and live BBC, she beat Major Ponder by 3 games to 0.

[The croquet] club used to be called the Lawn Tennis and Croquet Club, even though Bridge was the overwhelming part of the club.

The top players loved coming to Budleigh Salterton and considered our tournament as their pre Wimbledon tournament. 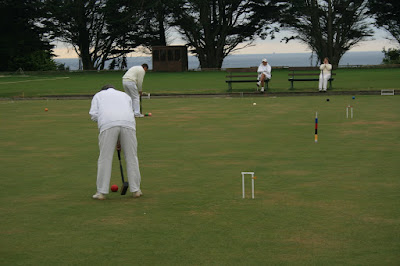 Major Freddy Stone was a strong croquet player. I remember my sister and I stealthily took a couple of clips off the hoops and sneaked up behind him and clipped them to the back of his jacket. We did not realise what chaos we had caused or how upset he was going to be. But he was a lovely man, and forgave us quickly.

My father learned to play Croquet in his senior years, and very quickly he did very well. But it perhaps it would have been impossible for him to tell the difference between the red and the green ball as he was extremely colour blind. I suspect he simply remembered which ball was which, and if that memory went awry, he would have asked another player to point out which was which.


I do remember when road workmen used to wave red or green flags to motorists when they need to control traffic around their work on the road. My father was driving us to Exmouth when a road man waved a red flag for him to stop. Daddy being colour blind drove on and received somewhat bad language from all around as the waved flag had been red to stop. On the return journey Daddy saw a flag being waved and stopped. Again trouble. The angry workman had been waving the green flag for him to drive on!


Budleigh Salterton is mentioned in one of the Gilbert and Sullivan operettas – it is a lovely small seaside town – old fashioned. It used to be said that there was more money hidden under the mattresses of Budleigh Salterton than in all the banks in Birmingham. I have also heard that the Major speaks to the Colonel, the Colonel speaks to the General, and the General only speaks to God in Budleigh Salterton. The history of the town has produced a town that has a lot of very pleasant people in it, mostly retired and where manners are still very important. 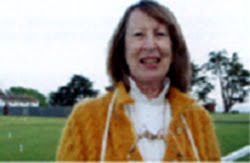 I used to think my parents had a good life, and thought that that was what I wanted to do when I was grown up. I am now here again and wouldn’t live anywhere else in the world.


If you can help in Joanna's quest for information about her sister, please let me know and I'll see that she gets the information immediately. Thank you again, Joanna, and accept my wishes for the very best of luck in locating your sister!