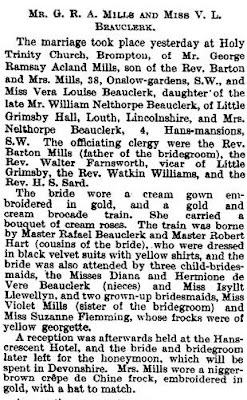 Last year in late March I obsessively transcribed the text of an item in The Times from April 1925 [left, and below, right] describing the wedding of George Ramsay Acland Mills and Vera Louise Beauclerk. Both families to some degree had ties to peerage, and the guest list attending the ceremony in Brompton and reception at the Hans Crescent Hotel was fairly extensive. It took me the better part of a morning to get it all down, given my proclivity to hunt-and-peck at the keyboard.

Three weeks later, on 17 April, I was contacted for the first time by Barry McAleenan regarding George Mills. Barry, as you may recall, had been aware that Mills taught at Ladycross Catholic Boys' Preparatory School in Seaford during the summer term of 1956. You may recall Barry writing:

I only vaguely remember Mr Mills and suspect that he used snuff. Many of his books were in the school library and I'm sure I read them as one of the key characters was called Pongo - which was slang at the time for the Army, as in 'the pongos are going in to Suez'… I cannot remember if I was taught by him - the chances are that he was only there that one summer term; the classes were small and I was only 10 at the time; he was very old in the days when being 40 was ancient and my teachers are only remembered for being gifted (rare) or abusive. 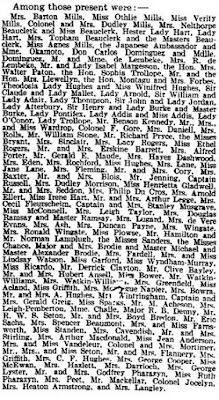 Barry, however, also pointed out another person in the photograph, although not right away. Two weeks later, Barry wrote:

Miss Winifred Hughes, mentioned in George Mills's wedding guest list [seen, right] was the name of the school nurse at Ladycross. This does not mean that they were the same person. She is third from the right in the central part of the 1956 school photo [click to see it]. She last appeared in the 1974 school photo and could have retired when she hit 65 - implying that she was born in c1909. Mainly remembered for giving us a monthly dose of 'rhubarb and soda' - an unnecessary and unpleasant laxative comprising washing soda flavoured with rhubarb. It's almost possible that she may have introduced George Mills to the school ...

So a Winifred Hughes was on the wedding list of George Mills and in attendance at Ladycross in 1956. That coincidental information simmered on my back burner for almost a year—until I explored the croquet playing of the Mills siblings in Budleigh Salterton.

That's when Barry also pointed out in the group 1957 Devonshire Park croquet photograph: "The man at 9 in the photo, E.A. 'Tony' Roper was the former (till 1954) headmaster of Ladycross."

So we find yet another connection between George Mills and Ladycross School, although it certainly doesn't prove that Miss Winifred Hughes attended George's wedding was the same rhubarb-pushing "Sister" at Ladycross, circa 1956! [Barry also has determined she is pictured in Ladycross photographs as late as 1974.]

Incidentally, for the clarification of American readers like myself, Barry adds: "Convents/workhouses and then hospitals shared staff titles [like "Sister"] by evolution... She had been a senior nurse in a hospital - a clinical role. Her colleague [at a school] would have been a matron - having domestic and laundry responsibilities." 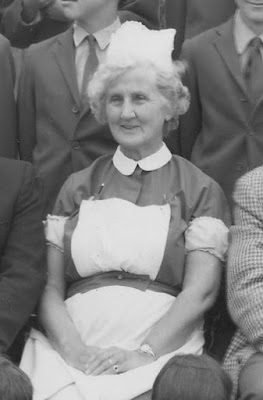 He recalled this Sister Hughes [left] as: "[I]n her 50's - a devout Catholic and rather cheerless. She usually wore a short red cape."

How many women named Winifred Hughes populated England at the time? Many. Would there be a way of winnowing away the chaff while searching for this Winifred Hughes?

The real key to the identity of the Winifred attending the wedding of George Mills and Vera Beauclerk on 23 April 1925 rests in the name of the guest who accompanied Miss Hughes: "Theodosia Lady Hughes and Miss Winifred Hughes" were in attendance together.

Assuming they were mother and daughter, that means that the Winifred Hughes at the wedding was Winifred Emily Frederica Hughes, who we know inherited £4897 10s. 5d. after Theodosia's passing in 1931. [Even more money was left to someone we can only assume would have been Winifred's brother, a Frederic James Robert Hughes, esquire.]

The trouble is that no one by the name 'Winifred Emily Frederica Hughes' ever was born or died in the UK, or anywhere else I can find for that matter, according to those databases! That name produces no results in Google, either. While she may, indeed, have been referred to by family and friends as Winnie, Millie, or Freddie, those names would not have appeared on U.K. documents recording her birth or death

Her only existence is a probate document [below, right] describing her inheritance after Theodosia's 1931 death in Surrey, as mentioned above.

Regarding attendance at the nuptials, some connection to Vera Beauclerk's family seems probable. The Miss Hughes on the list attended the affair with Lady Theodosia Hughes, who would have ben an in-law to another wedding attendee that day, Mrs. Topham Beauclerk, whose full maiden name was Gwendolen Loftus Hughes, 4th daughter of Capt. Sir Frederic Hughes, and mother of the 13th Duke of St. Albans, Charles Frederic Aubrey de Vere Beauclerk (1915-1988).

He also sired another daughter, artist Kathleen Myra Hughes (sometimes Myra Kathleen Hughes), who was a noted artist who was associated with Seaford in early 20th century. Yet another Seaford connection!

Hughes studied in London at the Westminster School of Art and the Royal College of Art where she trained in engraving and etching by Frank Short and Constance Potts. She exhibited at the Royal Academy and the Paris Salon, and was elected an associate of the Royal Society of Painter Etchers and Engravers in 1911.

Frank Short's career was notable because of his association with, and depictions of, Seaford, Sussex, where Hughes drew the etching seen at the left.

And here's something interesting: That artist (and spinster), M. K. Hughes (born in 1877) had died in 1918 at about the age of 40 in Surrey. Her probate records show that her own relatively substantial estate (£3825 9s. 5d.) passed on to—You may already have guessed it!—the mysterious "Winifred Emily Fredericate [sic] Hughes spinster" in 1920.


Let's take a look at some other documentation.

Dod's Peerage, Baronetage, and Knightage, of Great Britain and Ireland in 1901 further described her in this way: "m. 1871 as his 2nd wife, Sir Frederic Hughes, D.L., J.P., late capt. 7th Madras cavalry, and knight of the order of the Lion and Sun of Persia, who died 1895. Residences—Barntown House and Rosslare Fort, Wexford." 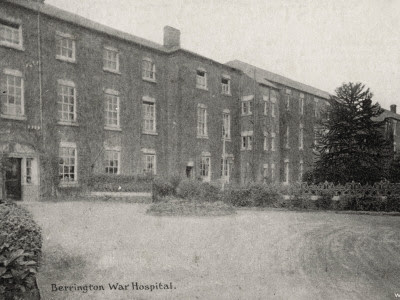 The London Gazette of 29 July 1919 published a list of 31 July recipients of the Royal Red Cross to "the under-mentioned Ladies in recognition of their valuable nursing services in connection with the War." Among the honorees, we find:

Berrington War Hospital [right] at Shrewsbury was later known as Cross Houses Hospital. Whether this Winifred Hughes was also George's 1925 wedding guest, I don't know, but it is likely that she would be Ladycross's Sister Hughes. (The title "Sister," by the way, in the QAIMNS Reserves, now QARANC, would seem to have implied a military rank similar to a lieutenant).

There isn't much else known here except what Barry recalls: "Now that you've mentioned Winifred Emily Frederica Hughes's full name, I have this notion that when she wrote out chits (at Ladycross), she signed them WEFH - but this has to be very unreliable after 55 years. It's also possible that her name may have been spelt Frederika or Frederike. I'm not convinced that she [Lady Theodosia's daughter] is necessarily the same person as in the 1974 photo. Just forensic reticence I suppose." 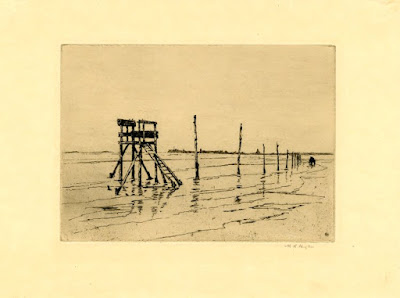 That is exactly why Barry is so invaluable to Who Is George Mills? Whereas I might get a running start and pitch myself headlong upon a conclusion that these Winifred Hugheses were one and the same, his reticence keeps me in check, and I appreciate it very much. Here's what we actually know:

● Roper had been Head Master at Ladycross through 1954.

● The nurse at Ladycross during those years was a Sister Winifred Hughes.

● A Miss Winifred Hughes attended the wedding of George Mills in 1925.

● That Miss Winifred Hughes was a relative (in-law) of George's wife, Vera Beauclerk. 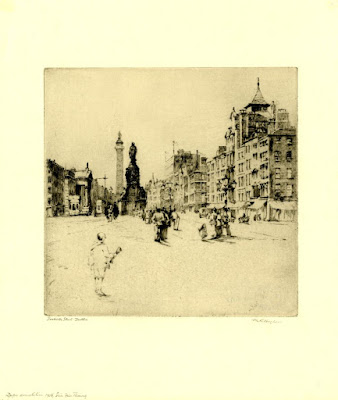 ● Winifred's half-sister, M. K. Hughes, was an artist of some renown whose mentor was Frank Short of Seaford, Sussex, a locale which Hughes herself often depicted as well.

● Myra Kathleen Hughes [whose works from the British Museum are seen above, left, and at right] was close enough to Winifred to leave her sizable estate solely to her, despite having at the very least other sisters (or half-sisters) Gwendolen Loftus and Georgina Theodosia, and likely a brother, Frederic, mentioned above.

● Both would have been about the same age as George Mills.


Perhaps Mills coincidentally knew two different women named Winifred Hughes, of the same approximate age, at different times in his life. And each also had an attachment to Seaford, East Sussex.

Could these women have been the same person? Or is this simply an amusing coincidence that would have had George remarking, "Miss Winifred Hughes? My! I once had an in-law, long ago, called Miss Winfred Hughes, and her sister so loved to come here to Seaford to sketch!"

And, as always, if you can help determine if these two Winifreds are one and the same—or not—please don't hesitate to contact me, and thank you in advance for your help!